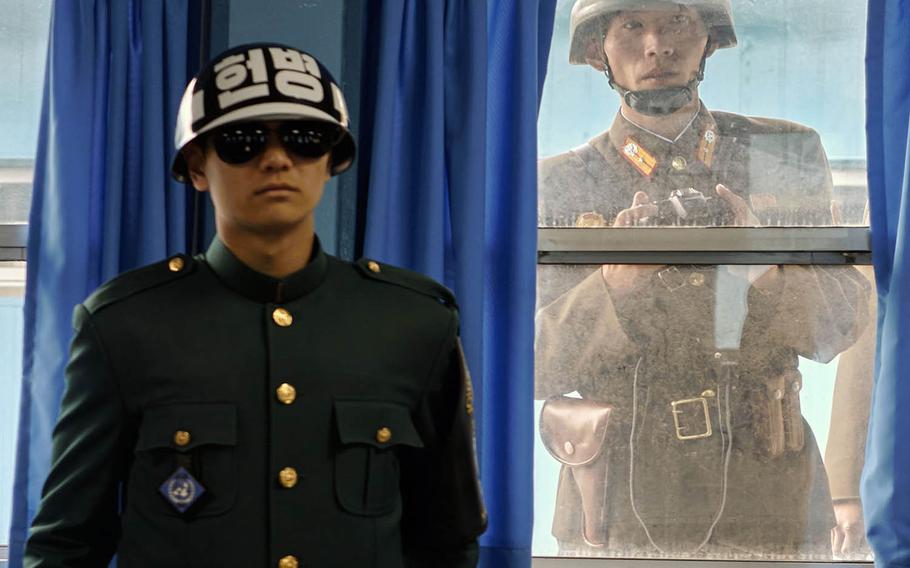 Buy Photo
A North Korean soldier looks over the shoulder of a South Korean soldier inside the United Nations Command Military Armistice Commission Conference Building at the Joint Security Area of the Demilitarized Zone between North and South Korea, in November 2015. (James Kimber/Stars and Stripes)

SEOUL, South Korea — South Korea urged the North to pick up the phone, saying it’s time for the rivals to reopen communication channels that have been suspended for more than a year amid rising tensions.

The top U.S. commander in the Pacific, meanwhile, warned that North Korea’s nuclear weapons program is “a recipe for disaster,” three days after the communist state test-fired what some said was its most successful missile.

The hotline at the truce village of Panmunjom in the Demilitarized Zone that divides the peninsula has been dormant since North Korea severed the channels after Seoul closed a joint industrial complex in the border city of Kaesong.

A unification ministry spokesman in Seoul said Wednesday that the lines haven’t technically been cut, but North Korean officials have not responded to near daily calls from their counterparts in the South.

“The government’s stance is that the inter-Korean dialogue channel should be reopened,” ministry spokesman Lee Duk-haeng told reporters during a regular briefing. “The ministry has conducted several internal reviews about how to restore it, but nothing specific has been scheduled yet.”

The two Koreas — which remain technically at war after their 1950-53 conflict ended in an armistice instead of a peace treaty — established the telephone lines in the 1970s to coordinate military and humanitarian matters.

The loss of the connection, which has been cut several times in previous years, has reduced the countries to a form of shouting via loudspeakers usually used to broadcast propaganda in the DMZ.

This became an issue over the past year when North Korean fishermen were found adrift and asked to be returned home. When the North failed to pick up the hotline, the South broadcast its plans to repatriate the fishermen in an at-sea exchange, then was relieved when North Korean ships appeared at the appointed time to retrieve the men.

New South Korean President Moon Jae-in has said he wants to reopen the Kaesong complex as he aims to pursue dialogue and engagement as well as pressure in dealing with the North. The previous conservative government refused to engage with Pyongyang until it abandoned its nuclear program.

Moon’s hopes for a softer approach have been complicated by North Korea’s rapid progress toward its stated goal of developing a nuclear-tipped missile that could reach the U.S. mainland.

The North has raised fears about its progress after conducting five nuclear tests, including two last year, and test-firing some 30 missiles over the past 15 months.

Many of the launches were considered failures, but experts said the one fired Sunday was a clear success and showed the country was making major advances.

Adm. Harry Harris Jr., who leads U.S. Pacific Command, cautioned against gloating over the fact the North still has work to do to miniaturize a nuclear warhead and perfect re-entry technology.

“Combining nuclear warheads with ballistic missile technology in the hands of a volatile leader like Kim Jong Un is a recipe for disaster,” he said Wednesday in a speech at the Sasakawa Peace Foundation, a think tank in Tokyo.

“Kim Jong Un is not afraid to fail in public, and every test he makes is a success because it takes North Korea one step closer to being able to deliver a nuclear-tipped missile anywhere in the world,” he added, according to a transcript of the speech.