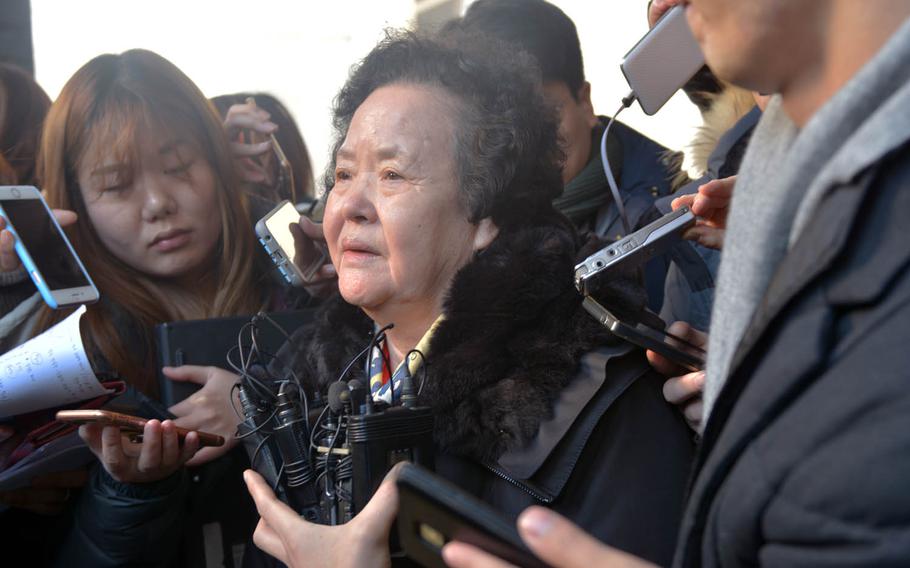 Buy Photo
Lee Bok-su, the mother of a South Korean college student murdered in 1997, talks to reporters outside the Supreme Court in Seoul on Wednesday, Jan. 25, 2017. The court upheld a 20-year prison sentence for Arthur Patterson, the former U.S. Forces Korea dependent convicted in the killing. (Kim Gamel/Stars and Stripes)

Arthur Patterson, who was the 17-year-old son of a U.S. military contractor at the time of the killing, was not in court to hear the response to his final appeal.

Patterson’s lawyer maintained that his client is not guilty.

The case has captivated South Koreans for nearly two decades as Patterson and a friend, both Korean-Americans, accused each other of fatally stabbing 22-year-old Cho Joong-pil at a Burger King in Itaewon, a popular shopping and entertainment district nearby the U.S. Army’s Yongsan Garrison.

Patterson was initially convicted and sentenced to 18 months in prison for destroying evidence and possessing a deadly weapon. He was released in 1998 as part of an annual amnesty to mark South Korea’s Liberation Day.

Patterson returned to the U.S. in 1999 after prosecutors failed to renew a travel hold, although they reserved the right to file additional charges against him.

His friend, Edward Lee, a Korean-American who had no ties to the military, was originally convicted of homicide and sentenced to life in prison, but that was reduced to 20 years on appeal before being thrown out for lack of evidence.

Prosecutors later said Patterson was acting on a dare from Lee when he stabbed Cho repeatedly with a knife in the fast-food restaurant’s bathroom, shortly before 10 p.m. on April 3, 1997.

The courts found that Lee was an accomplice in the killing because he had challenged Patterson to show that he was capable of murder, but said Lee could not be charged with murder again because of the prohibition against double jeopardy.

Cho’s mother, Lee Bok-su, said she was satisfied with the outcome but wished a harsher sentence could have been imposed and that Edward Lee could face a new trial.

“My son has been avenged because the real criminal was caught and our family’s desire has been fulfilled,” she told reporters outside the Supreme Court building. “I may have to comfort myself with the thought that [Patterson] can only get 20 years because he was a teenager at the time. But these guys killed a person for fun.”

She campaigned for years to bring Patterson back to face justice in South Korea, but it was the 2009 movie “The Case of Itaewon Homicide” based on the killing that reignited public outrage.

Prosecutors also were accused of bungling the investigation, prompting a Seoul court in 2006 to order the South Korean government to pay the victim’s family the equivalent of $34,000 for mistakes that were made.

Patterson was indicted on a murder charge in December 2011 and extradited from California in September 2015 to face trial in Seoul. The Central District Court convicted him last January and sentenced him to 20 years, the maximum sentence because he was a minor at the time of the crime.

The Supreme Court dismissed his appeal in a brief hearing Wednesday.