South Korea to send destroyer to Strait of Hormuz amid tensions between US, Iran 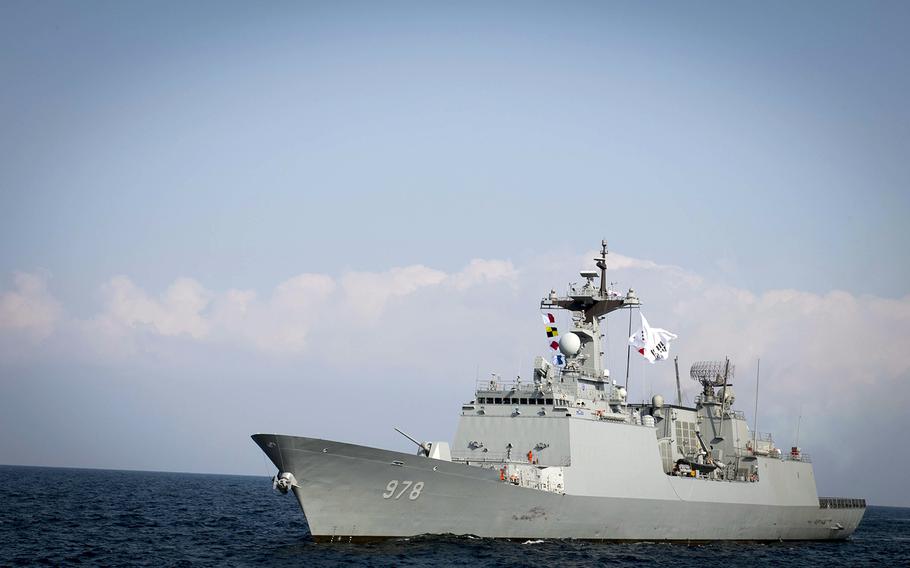 SEOUL, South Korea — South Korea will send a naval destroyer with a crew of 300 to the Strait of Hormuz in an independent mission, the defense ministry said Tuesday, a decision that followed months of U.S. pressure as Washington seeks help amid tensions with Iran.

Seoul faced a dilemma in trying to balance a need to support its decades-old ally the United States and avoid alienating Iran, one of the few countries to have diplomatic relations with both North and South Korea.

South Korea will deploy troops to the strategic waterway by expanding operational areas of the Cheonghae Unit, which has been on an anti-piracy mission in the Gulf of Aden off the coast of Somalia since 2009, according to the defense ministry.

“In consideration of the current situation in the Middle East, the government has decided to temporarily expand the Cheonghae Unit’s sphere of activity in order to guarantee the safety of our people and the freedom of navigation of our vessels,” the ministry said in a press release.

The unit’s 4,400-ton destroyer Wang Geon and its crew will assume their new role on Tuesday, it said.

The ministry added that the mission will act independently from the U.S.-led international coalition defending the strait but will send two liaison officers to the International Maritime Security Construct and will cooperate with it if necessary.

The announcement came less than a week after Secretary of State Mike Pompeo reportedly called for collective efforts to safeguard the narrow waterway during a meeting in California with his South Korean counterpart, Kang Kyung-wha.

The United States welcomed the decision.

“This decision is a demonstration of the strength of the U.S.-(South Korean) alliance and our commitment to cooperate on global security concerns,” the U.S. Embassy in Seoul said in a statement.

The waterway has become a flash point after the U.S. withdrew from a 2015 nuclear deal with Iran and killed Iran’s top general in an airstrike earlier this year.

Iran was accused of attacking international oil tankers in the area last year, although it denied the allegations. It also seized a British-flagged oil tanker after an Iranian oil tanker suspected of sanctions violations was detained by authorities in Gibraltar. Both ships were eventually released.

More than 70% of South Korean oil imports are carried via the Strait of Hormuz, and South Korean vessels sail through the area about 900 times per year, the ministry said, adding that about 25,000 South Koreans live in the Middle East.

Harry Harris, the U.S. ambassador to South Korea, said last week that Washington has been asking South Korea and other nations to help in maritime security in the area for months. Some 28,500 U.S. troops are stationed in South Korea.

“Very few countries have a greater need than the Republic of Korea because it gets 70% of its oil supplies from the Middle East,” he told reporters on Thursday.

Iran’s ambassador to South Korea warned earlier this month that a decision by Seoul to send troops to join the U.S.-led coalition could provoke a “crisis” in bilateral relations.

“If another country conducts military activities within the Strait of Hormuz, we will not remain inactive,” Saeed Badamchi Shabestari said in a Jan. 10 interview with the South Korean newspaper JoongAng Ilbo. “Iran and Korea share a history that dates back 1,000 years … and this moment is the biggest crisis situation in our history.”