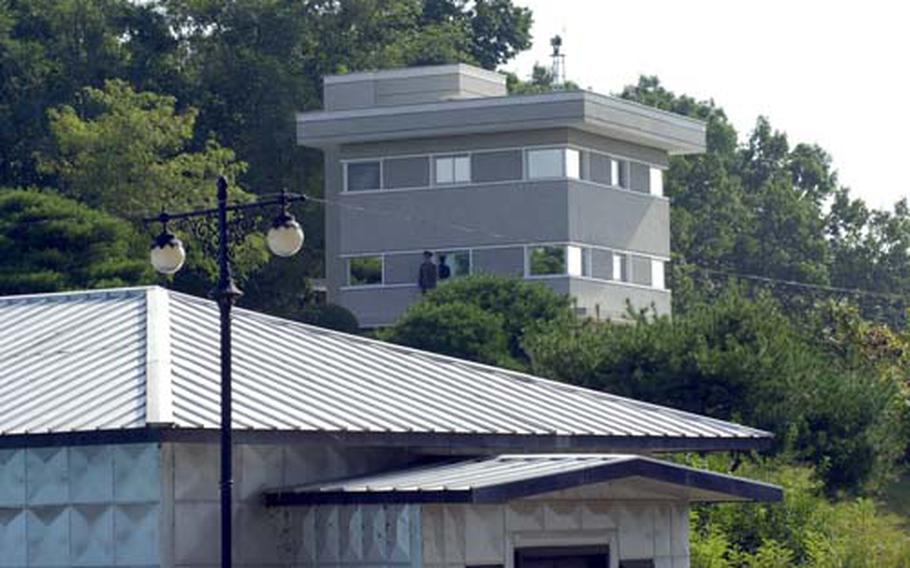 DEMILITARIZED ZONE, Korea &#8212; You might call it a case of keeping up with the Joneses, or in this case the Kims.

Work is under way on the South Korean side of the Demilitarized Zone to renovate three guard posts and two checkpoint buildings into bigger, more modern structures.

The construction comes a year after North Korea finished work on the replacement of four guard posts on its side of the DMZ, and a decade after the two sides engaged in a tit-for-tat battle to see who could build the more impressive reception centers in the Joint Security Area &#8212; a period remembered as &#8220;the skyscraper wars.&#8221;

Welcome to the DMZ, where size matters.

Lt. Col. John Rhodes, commander of the United Nations Command Security Battalion &#8212; Joint Security Area, said the renovated buildings on the south side of the Military Demarcation Line will have new safety and convenience features like blast-resistant glass, thicker walls and running water.

Rhodes said the work was not necessarily being done in response to the more impressive guard towers that went up last year on the North&#8217;s side of the JSA, and dismissed the suggestion that the two sides were once again engaged in a game of &#8220;Can You Top This?&#8221; reminiscent of the late 1990s.

It was in 1998 that the Freedom House &#8212; an unimpressive structure originally built in 1965 on the South&#8217;s side of the JSA &#8212; was rebuilt. The new, futuristic Freedom House just happened to be taller than the two-story Panmungak, North Korea&#8217;s main building that sits directly across the JSA.

The following year, the North Koreans added a third story to the Panmungak, making it taller than the Freedom House.

JSA security escorts routinely make light of the construction battle in the speech they give to tourists who visit the JSA.

However, he said he does not believe the guard posts on the North&#8217;s side of the JSA were replaced for any nefarious reasons or tactical advantages. The old North Korean guard posts were also in disrepair, he said.

&#8220;The [Republic of Korea] government took great care to build those structures not to be provocative in any way to the [Korean People&#8217;s Army] on the North Korean side,&#8221; he said.