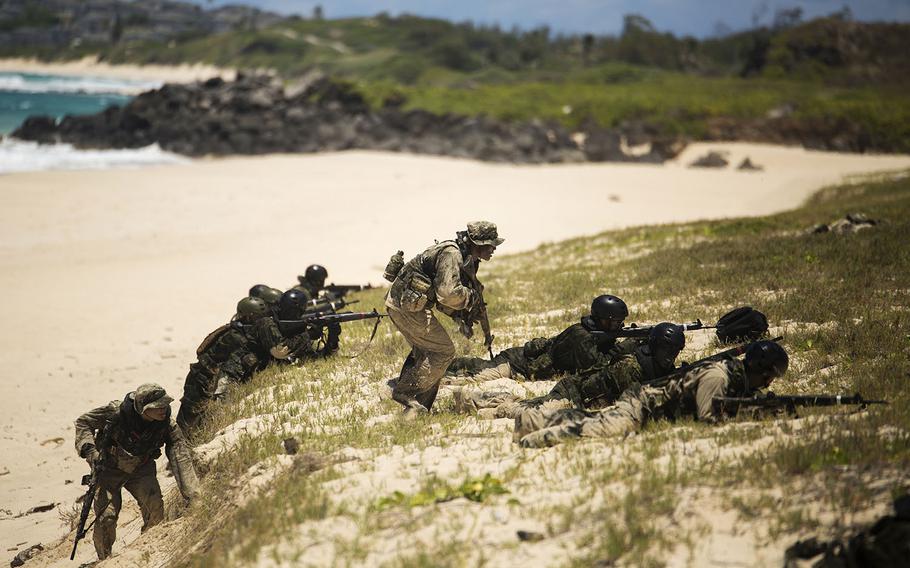 SEOUL, South Korea — Concerns over North Korean aggression and a rising Chinese military has led to a tempered South Korean reaction to last week’s decision by Japan to expand the role of its military, analysts say.

In a reinterpretation of its post-World War II pacifist constitution, Tokyo reversed a longtime ban on allowing its forces to come to the aid of its allies in combat. While the move has received the support of U.S. lawmakers, many in South Korea – which was brutally colonized by Japan from 1910 to 1945 – view it as a sign of Japanese imperial ambitions.

But in South Korea, where even North Korean leader Kim Jong Un has received higher favorability ratings than Japanese Prime Minister Shinzo Abe, the government has reacted with relative restraint to Tokyo’s reversal of its ban on collective self-defense.

Bong Youngshik of the Asan Institute for Policy Studies in Seoul said the Park Geun-hye administration’s seeming lack of a strong response to Japan’s decision reflects the complex nature of Tokyo’s role in maintaining security on the peninsula.

On one hand, Seoul worries that Japan’s reinterpretation of its pacifist constitution marks a return to its military aggressiveness that could undermine regional stability. On the other, the military alliance between economic powerhouses Japan and the U.S. is critical in deterring and potentially repelling North Korean aggression.

And in the face of an increasingly assertive China, South Korea doesn’t want to strain its relationship with Washington.

For now, he said, Park will continue to maintain a measured, wait-and-see stance until it becomes clear how Japan will put its collective self-defense policy into practice.

“There are strategic and political reason (for Park) to wait,” Bong said. “It’ll be, at least for a while, business as usual.”

South Korea’s foreign ministry issued a statement last week in response to the change saying it “will never tolerate any exercise of such right without the ROK’s request or consent on matters that can affect the security of the Korean Peninsula or national interests of the ROK.”

It also called on the Japanese government to maintain transparency as it fleshes out the details of its new collective self-defense posture.

“Japan is walking on a path deviating from what normal countries should do in the 21st century,” National Assembly floor leader Lee One-koo said, according to Yonhap News.

Many South Koreans believe Japan has not fully acknowledged atrocities committed during its occupation of the Korean Peninsula, including its use of “comfort women,” or sex slaves. Other issues that plague the relationship between the East Asian neighbors include dual claims of ownership to the Takeshima/Dokdo islets and portrayals of history in textbooks.

Japan’s reinterpretation of its constitution has raised concern, particularly among those in the United States, that Seoul might look to strengthen ties with Beijing, which was also colonized by Japan and has its own set of historical grievances against Tokyo.

But Yang Uk, a senior research fellow at the Korea Defense and Security Forum, said that while South Korea and China may share similar historical grievances against Japan, finding common ground on security issues is another matter.

Approximately 28,500 U.S. troops are stationed on the peninsula as a deterrent against North Korea, and moving closer to China would threaten the longstanding security alliance between Washington and Seoul.

“The successful U.S.-South Korean alliance is not going to be thrown away overnight,” he said. “The Combined Forces Command is the core of south Korea’s security.”