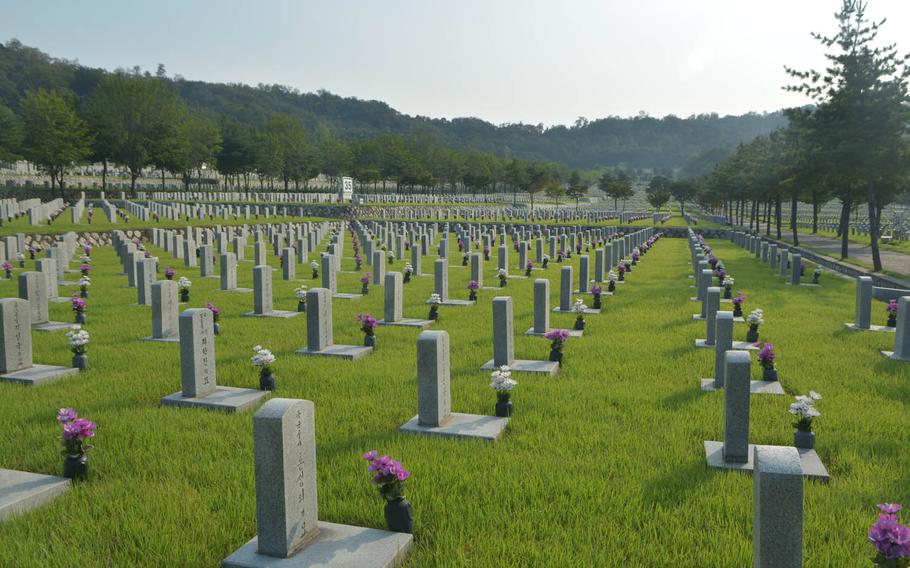 Buy Photo
About 29,000 South Korean servicemembers have been buried in a section of the National Cemetery in Seoul. The military is searching for more than 130,000 still missing from the Korean War in a project that is similar to the U.S. POW/MIA recovery efforts. More than 7,800 Americans also remain unaccounted for on the divided peninsula. (Kim Gamel/Stars and Stripes)

Buy Photo
About 29,000 South Korean servicemembers have been buried in a section of the National Cemetery in Seoul. The military is searching for more than 130,000 still missing from the Korean War in a project that is similar to the U.S. POW/MIA recovery efforts. More than 7,800 Americans also remain unaccounted for on the divided peninsula. (Kim Gamel/Stars and Stripes) 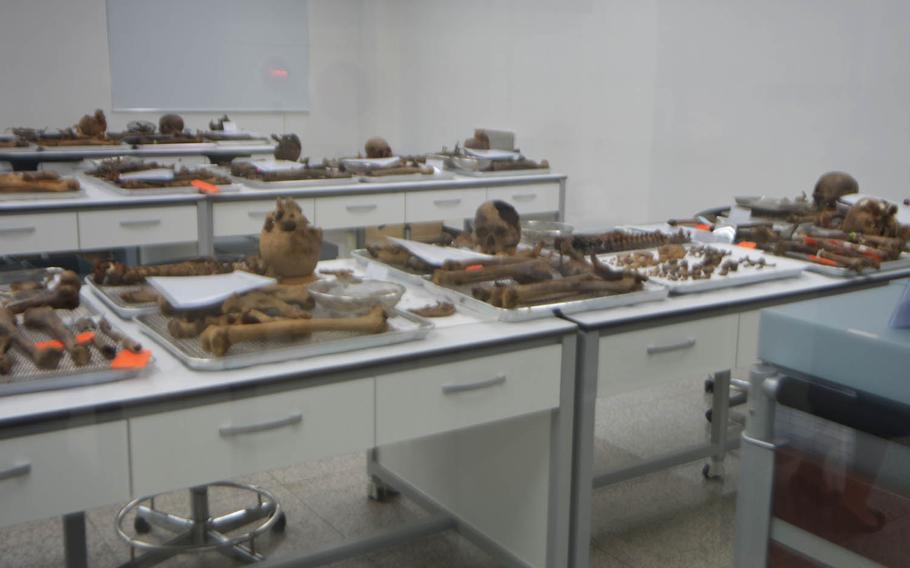 Buy Photo
The reamins of servicemembers who died during the Korean War are examined at South Korea's Ministry of National Defense Agency for KIA Recovery and Identification, known as MAKRI, on Sept. 12, 2016, in Seoul. The remains were found by search crews who fan out on the peninsula for several months each year as part of an effort to find more than 130,000 South Koreans and 7,800 Americans who remain missing. (Kim Gamel/Stars and Stripes) 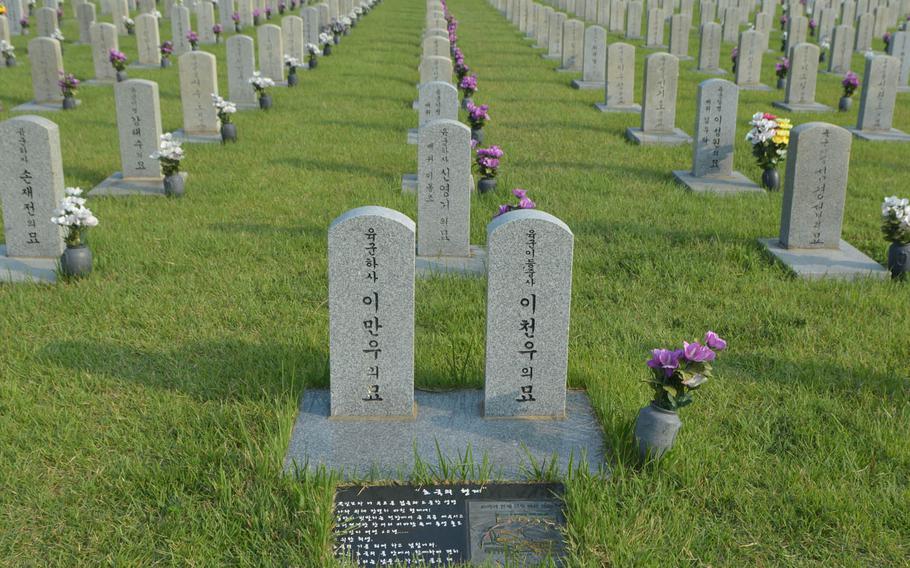 Buy Photo
The graves of two South Korean brothers who died while fighting in the Korean War. One was buried in the National Cemetery in Seoul after he died in 1951, while the other was interred in 2010 after his remains were found as part of the military's search efforts. (Kim Gamel/Stars and Stripes)

SEOUL, South Korea — South Korea’s military is racing against time to find the remains of more than 124,000 servicemembers still missing decades after the Korean War left the peninsula divided by the world’s most militarized border.

Some 9,100 sets of remains have been unearthed since the recovery project started in 2000, but only 116 have been identified, according to the Ministry of National Defense’s Killed in Action Recovery and Identification unit, known as MAKRI.

The effort had a late start. South Koreans faced severe economic hardships after the war against the North ended. The capital, Seoul, and many other cities were virtually destroyed so the government’s priority was survival and reconstruction, not finding fallen heroes.

“The government and the people were focused on economic development and getting out of poverty,” said Col. Lee Hak-ki, MAKRI’s commander. “Therefore there was a lack of interest in excavating the remains of war dead at that time.”

That changed in 2000 when Korea marked the 50th anniversary of the start of the war. MAKRI began as a three-year memorial project but was established as a permanent entity after remains and relics such as dog tags and other items were found, raising its public profile.

The agency also cooperates with the U.S. Defense POW/MIA Accounting Agency in its search for more than 7,800 Americans who remain missing from the war. Most were lost in the North, and joint recovery operations were broken off in 2005 after Washington said the safety of its searchers was not guaranteed.

New challenges emerged as South Korea experienced rapid industrialization and urban sprawl that endangered potential recovery sites. Dirt roads were paved and high rises sprouted up across the country. Many war survivors who could provide valuable DNA needed to identify remains have died.

Search crews armed with shovels and other tools regularly fan out to former battlefields and burial sites across the country to sift through the earth for skulls, bones and personal effects. Scientists and researchers then pore over the remains and other forensic evidence at MAKRI’s laboratories in the tree-covered hills above the vast National Cemetery in Seoul.

The remains of 350 servicemembers, including about 10 believed to be from enemy forces, have been found since this year’s search started in March, with a break in August because of a heat wave. The effort will pause in November for the winter.

That’s a fraction of the estimated 160,000 Korean soldiers, police officers, boys known as student soldiers and firefighters believed to have been killed during the war, which pitted the U.S.-backed South against the communist North. More than 29,000 have been buried in symmetrical rows at the cemetery.

One double grave with two headstones side by side stands out. It tells the story of two brothers who died just months apart in the war, but only one received a timely burial. Sgt. Lee Cheon-woo was finally laid to rest with his older brother, Staff Cpl. Lee Man-woo, in 2011 thanks to MAKRI’s efforts.

The nature of the war, which began with a surprise invasion by the North, poses another major obstacle. The South was ill-prepared for battle, and soldiers and others were often thrust into the fighting without dog tags, dental records or other means of identification.

“Clues for identifying remains are extremely limited,” Lee said in a recent interview. He pointed out that many of those who died were young men without children who could provide DNA, and the remains are often in poor condition.

Glass cases in the organization’s halls display names carved onto protractors, knives and other items by soldiers apparently desperate to show they were there. Other artifacts found with the remains include whistles, pens, spoons and toothbrushes.

The agency, which had a budget of about $4.5 million this year, has appealed to the public to provide DNA samples and tried to make it easier by allowing people to do so in public hospitals and clinics.

The agency’s commander says South Korea, like the United States, believes it’s important to repatriate all fallen heroes to honor their sacrifice and reassure potential recruits that their country won’t give up on them.

“It’s very important to keep the promise to veterans and deceased patriots that the nation will find those young people who gave up their lives for their country,” Lee said.

Of those still missing, some 84,000 are believed to be in South Korea, 10,000 in the Demilitarized Zone and 30,000 in North Korea, according to MAKRI. Remains determined to be North Korean or Chinese forces were buried in a separate so-called enemy cemetery north of Seoul, although 541 Chinese soldiers have been repatriated.

Sheridan Carr, whose brother-in-law died as a prisoner of war but his body never returned, said recovery efforts are essential to provide closure for the families. 1st Lt. Baldwin Ronald Carr was a graduate student at Michigan State University before he was deployed to Korea in 1951.

“I think my father-in-law waited until the day he died for his son to walk through the door, as many people do,” Carr, who is from Lansing, Mich., said during a recent visit to the MAKRI facilities.