South Korea says Trump asked for coronavirus testing kits, offers to send what it can 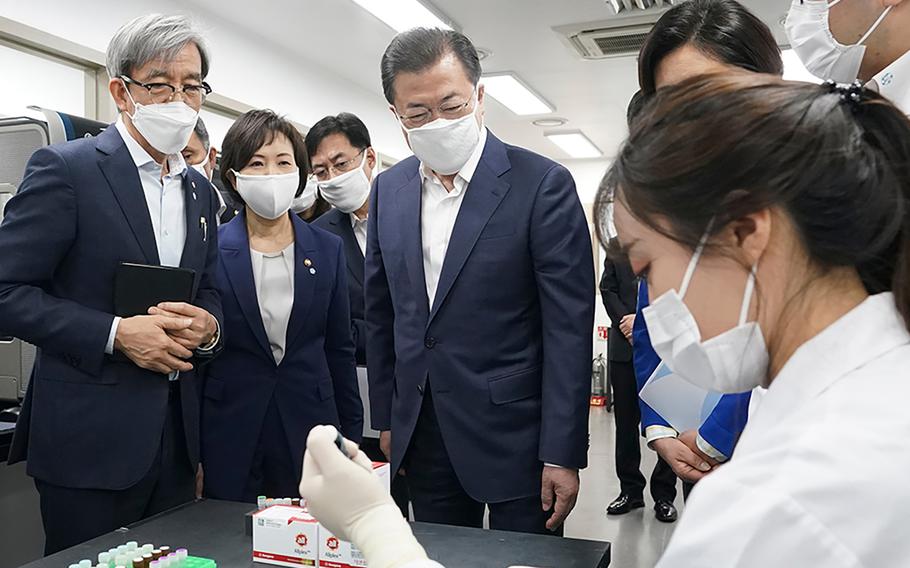 SEOUL, South Korea — South Korea’s president said Donald Trump asked South Korea for help with coronavirus testing kits and other equipment, and officials offered to send what they could as the United States struggles to cope with the pandemic.

Moon Jae-in’s comments come as the South reported a slight uptick in the number of confirmed cases on Tuesday, raising the total to 9,137 but remaining far below the peak of 909 infections on Feb. 29.

Authorities blamed a large jump in imported cases, prompting them to impose a two-week quarantine on all visitors arriving from the United States, in addition to that already imposed on Europeans.

Trump made the request during a 23-minute phone conversation to discuss cooperation against the virus, according to the Blue House.

“Yesterday, U.S. President Donald Trump made a request to us for the urgent provision of test kits and quarantine products,” Moon said Wednesday during a visit to Seegene Inc., a Seoul-based company that develops diagnostic solutions.

The comment elaborated on a transcript of the phone conversation showing that Moon was willing to provide as much equipment as it could spare but noted possible limitations because of the U.S. need for approval by the Food and Drug Administration.

“When President Moon explained that FDA approval may be required, President Trump said he would take immediate action to ensure that approval is granted within the day,” according to the transcript.

Jeong Eun-kyeong, director of the Korea Centers for Disease Control, also said Wednesday South Korea is willing to send chemical reagents used to extract genetic material during the diagnostic tests, as long as it doesn’t have a negative effect on its own testing capabilities.

The White House confirmed that the two leaders spoke on Tuesday but did not mention the request.

South Korea has drawn praise for its aggressive approach to testing and tracking the virus as it was at the center of one of the largest outbreaks outside of China for weeks. It pioneered the use of drive-thru clinics and employed an extensive closed-circuit TV network to find and isolate other people who may have been exposed.

Trump has insisted that the U.S. is “doing a tremendous amount” to fight the virus despite criticism about shortages of testing capabilities and respirators used for treatment.

Defense Secretary Mark Esper also said Tuesday that the military is “making sure we have enough test kits.”

“It’s not perfect right now,” he told reporters. “But for the most part, we’ve been able to — to test people and get results back in a timely manner.”

U.S. Forces Korea, which commands some 28,500 service members on the divided peninsula, relied on South Korean tests for weeks before standing up its own capabilities on March 8. USFK has had 10 infections, including one soldier.

Moon credited the speedy development of diagnostic solutions by local biotech companies for helping South Korea to slow the pace of infections even as the U.S. and other countries see the number of cases spike.

“Now global coordination has become very urgent with regard to both the quarantine and the economy,” Moon said. “Our companies’ diagnostic capabilities will play a big role.”

South Korea said 126 people have died from the virus, while 3,730 have fully recovered and been discharged. The number of imported cases increased by 34 to 101 on Tuesday, marking the largest single-day rise.