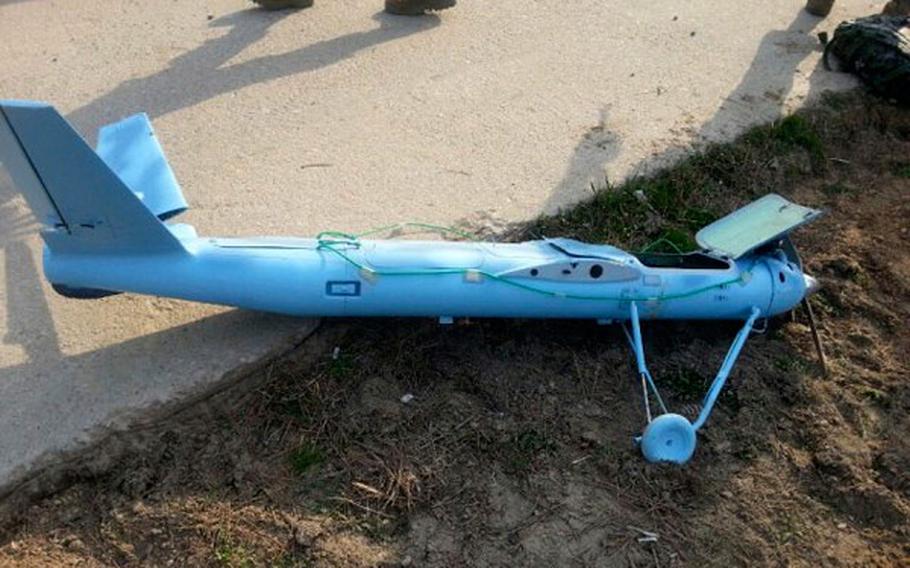 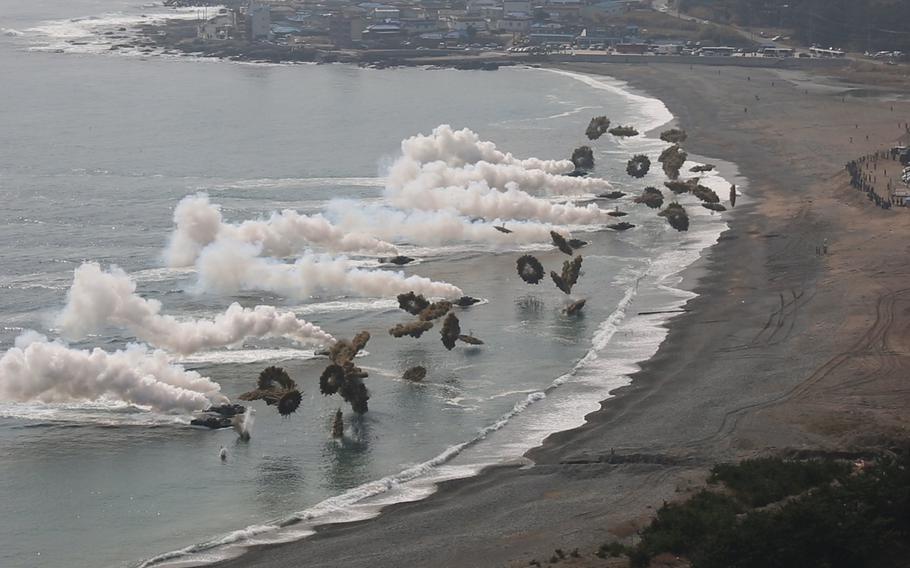 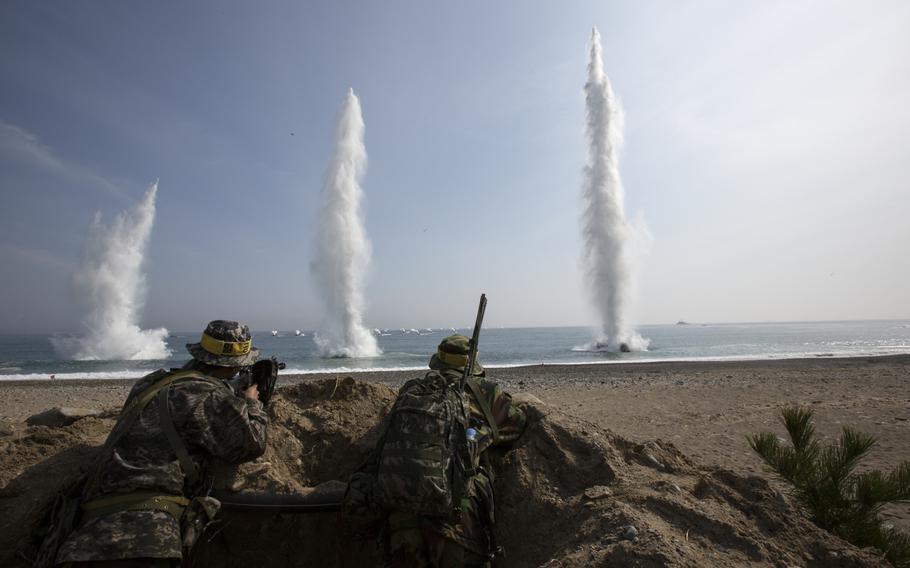 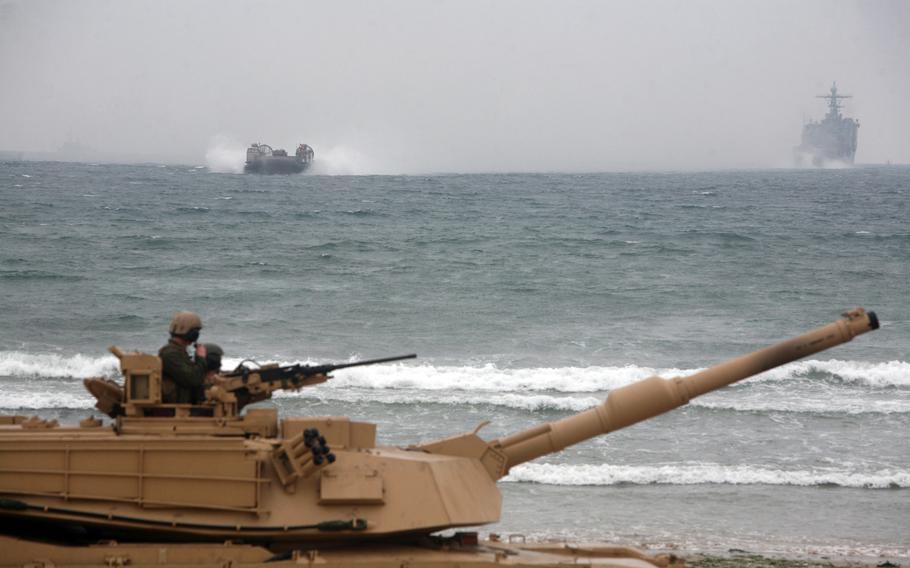 SEOUL — After weathering a number of North Korean provocations during her first year on the job, South Korea’s president may be learning the same lesson as her predecessors: Her influence with North Korea is limited because so much depends on Pyongyang’s willingness to change and cooperate.

Recent weeks have epitomized the peninsula’s volatility — a swing from hope as the two Koreas held emotional reunions of elderly family members separated for decades by the Demilitarized Zone, to confrontation as both sides lobbed hundreds of shells across their maritime border.

That was followed by the discovery of two rudimentary drones believed to belong to North Korea, one of which may have flown over and photographed the Blue House, the presidential residence and office.

The next test could come as soon as this week, with U.S. President Barack Obama planning a two-day visit to South Korea starting Friday.

On its government-run website, North Korea called Obama’s visit dangerous, saying it was “aimed to escalate confrontation and bring dark clouds of a nuclear arms race to have over this unstable region.”

On Tuesday, South Korea’s defense ministry said there are signs that North Korea could be preparing to carry out a fourth nuclear test.

“A lot of activity is currently being seen, so our forces are keeping in mind the possibility that North Korea may suddenly conduct a nuclear test in a short period of time, or as in previous cases, deceive us with what appears to be a nuclear test,” said Kim Min-seok, the spokesman for Seoul’s defense ministry, according to a Yonhap News agency report.

But, unless North Korea launches an attack that inflicts casualties, as it did against the South’s warship Cheonan in 2010, President Park Geun-hye will likely maintain her dual strategy of engagement and pressure, Bechtol said.

“I think her hands would be tied then,” he said. “She would have no choice but to take very stern measures.”

Park, who took office in February 2013, will maintain her signature “trustpolitik” strategy — described by administration watchers as a tit-for-tat mix of confidence-building initiatives combined with the threat of a strong response to military provocations, Blue House spokeswoman Yoo Myung-hee said earlier this month.

“But right now, in the face of North Korea’s recent provocative actions, there will be greater emphasis toward taking a firm position against the North,” Yoo said, adding that such an approach would “include consequences for provocative actions but flexibility.”

In an apparent show of muscle, South Korean defense officials have announced that the country test-fired a new ballistic missile capable of striking anywhere within the North and plan to deploy the weapon next year. Officials denied that the announcement’s timing was related to the exchange of artillery fire along the Northern Limit Line.

A congressional assessment of U.S.-South Korea relations, released earlier this year, said the Obama administration has supported Park’s policy, though “it is not clear how the Park government will resolve the seeming contradiction between the impulses of toughness and flexibility.”

Analysts say a number of events could have triggered the North’s recent actions, from anger over last month’s trilateral summit between the U.S., South Korea and Japan to a need to shore up internal support for Kim Jong Un. Pyongyang may have even wanted to wrap up an ongoing period of military training in time for troops to help with the spring planting season.

Go Myong-Hyun, a research fellow at the Asan Institute for Policy Studies in Seoul, said Pyongyang was reacting to a March 28 speech by Park in Dresden, Germany, in which she offered humanitarian aid and development assistance while urging the North to denuclearize.

In essence, Park was trying to set up a firewall between the political and non-political issues that face the two Koreas — something the North, which has repeatedly used brinksmanship to wring aid from the West, strongly opposes, he said.

Park likely expected the North to respond with some show of force to her speech and will “stick to her guns” despite the shelling.

Go said her “trustpolitik” approach, which he described as a “work in progress that didn’t have all the details thought out clearly,” combines elements one president’s policy of engagement and another’s stance against yielding anything to the North.

“She’s trying to come up with a carrot that’s not going to be misused by North Korea,” Go said.

The North’s attack appeared to be intentional given the number of shells it fired, and the fact that so many crossed the maritime border into South Korean territory, Bechtol said.

“They were trying to raise the stakes a little bit and see how the South reacted,” he said, adding that the South’s response, which including scrambling F-15 fighter jets, was both immediate and efficient. “What they may have been doing was gauging the South Koreans to see how fast they were able to react, given that there are now new rules of engagement and new weapons on these islands.”

Ohm Tae-am of the Korea Institute for Defense Analyses said he believed Pyongyang was trying to force greater support from China, its key ally and economic benefactor, by ratcheting up tensions on the peninsula.

Daniel Pinkston of the International Crisis Group said there is little pressure in the South, where domestic issues often trump concerns about North Korea, for Park to alter her approach.

But the North has shown no signs of changing its underlying ideology no matter what the South does.