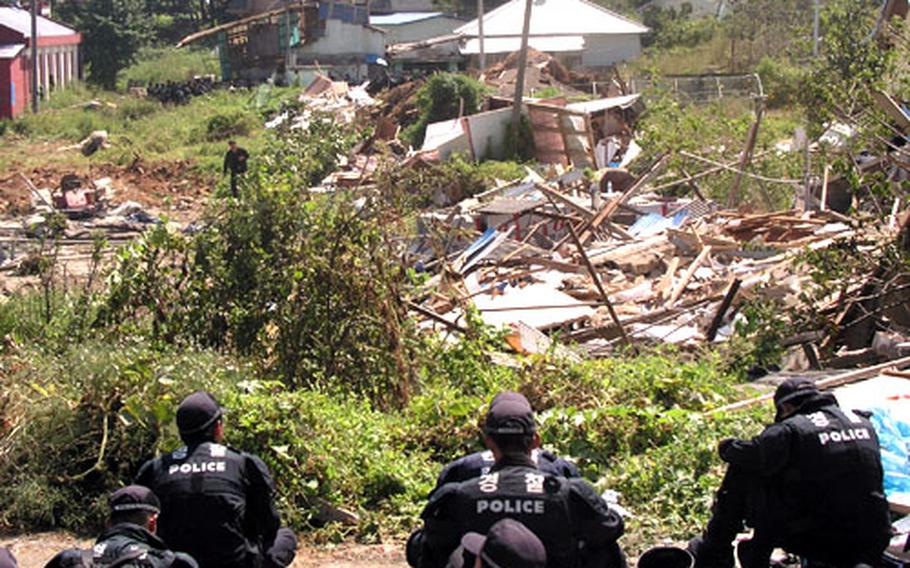 Riot police in Daechu-ri village at Pyeongtaek, South Korea, look out on the remains of some of the dozens of vacated homes torn down by work crews Wednesday to help clear the way for Camp Humphreys to expand. (Franklin Fisher / S&S)

Riot police in Daechu-ri village at Pyeongtaek, South Korea, look out on the remains of some of the dozens of vacated homes torn down by work crews Wednesday to help clear the way for Camp Humphreys to expand. (Franklin Fisher / S&S) 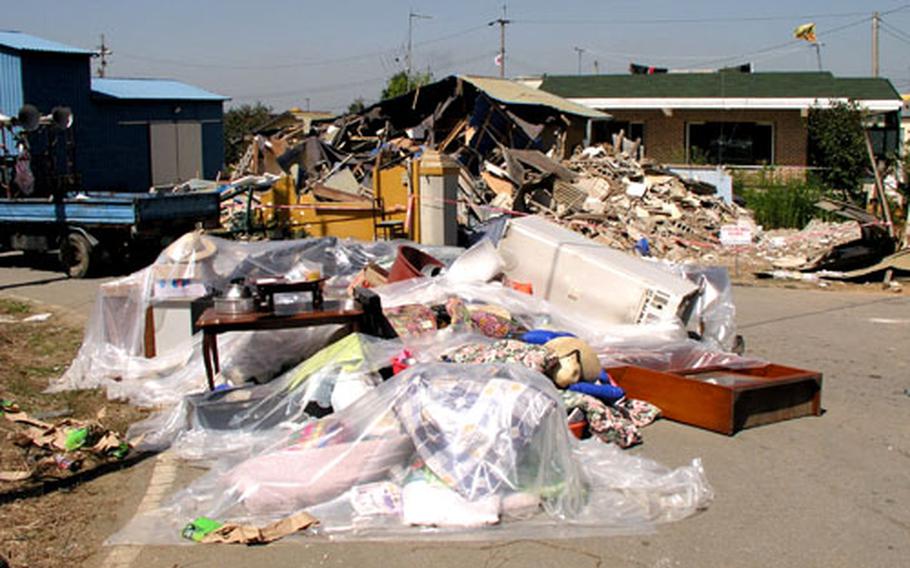 Household goods are piled up outside one of the vacated homes that South Korean authorities tore down Wednesday. (Franklin Fisher / S&S) 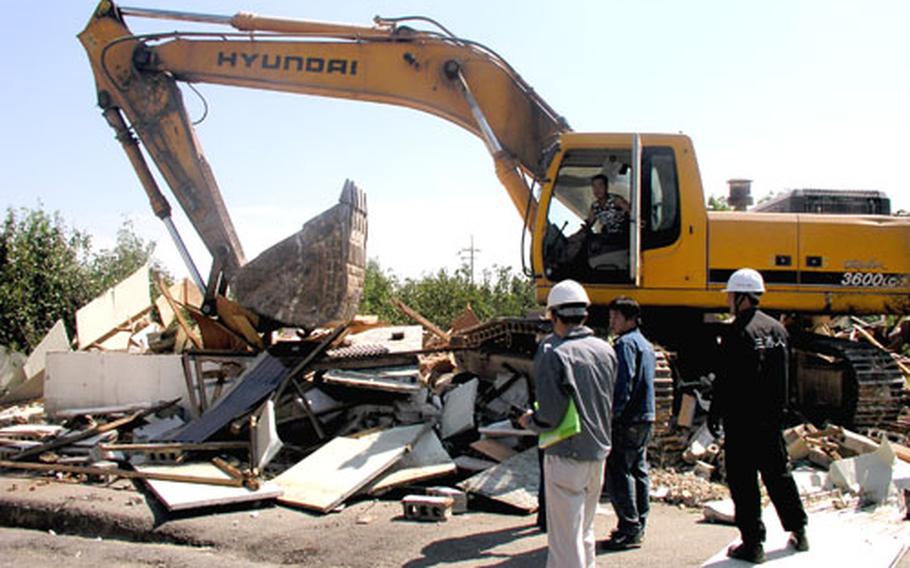 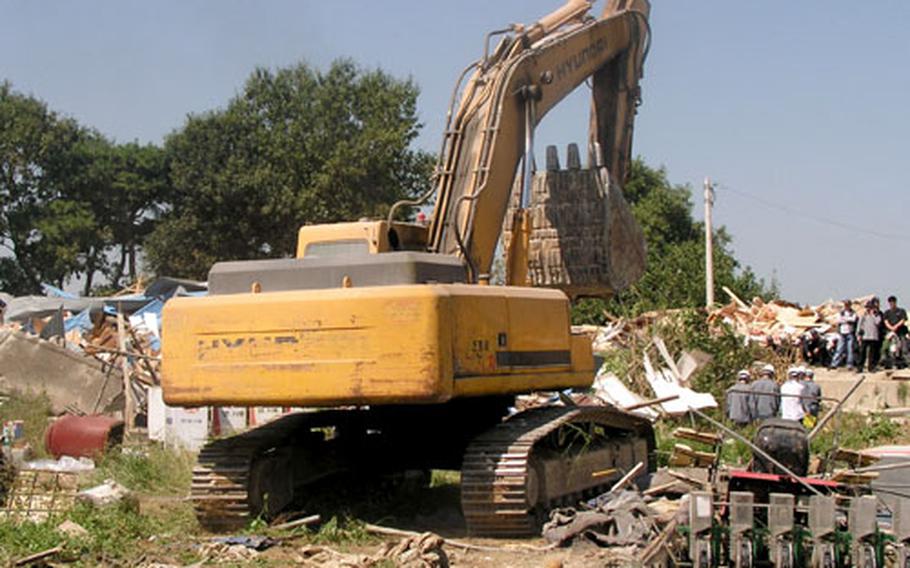 South Korean work crews were aiming to tear down 90 vacated homes in several area villages to help clear the way for the expansion of Camp Humphreys. (Franklin Fisher / S&S) 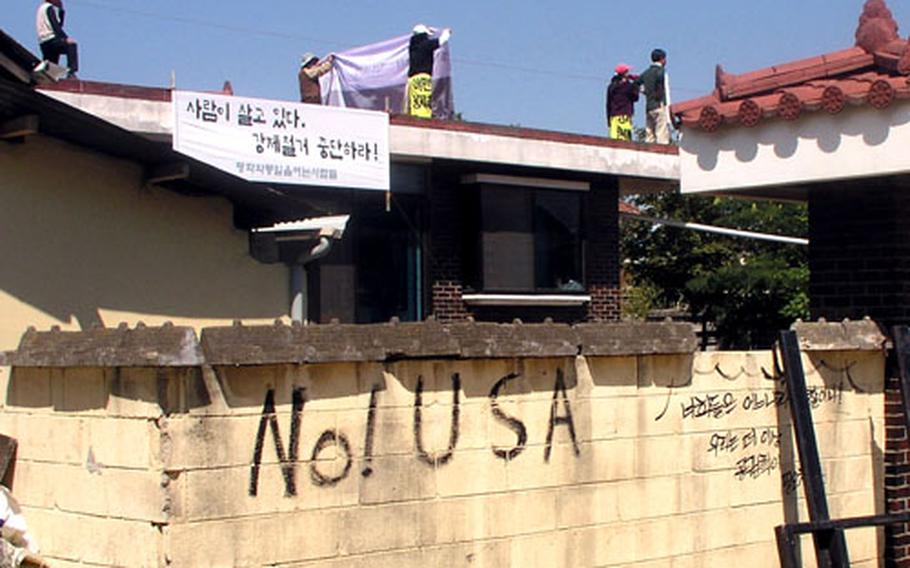 On the wall of a home in Daechu-ri, the words "No! USA" appear on a wall on Wednesday. Activists on the rooftop are shouting their opposition to the U.S.-South Korean agreement that will see Camp Humphreys expand onto nearby lands. (Franklin Fisher / S&S)

DAECHU-RI, South Korea &#8212; South Korean work crews under heavy police escort tore down scores of vacated homes in a village Wednesday to clear the way for Camp Humphreys to expand.

Camp Humphreys in Pyeongtaek is slated to triple in size and become the U.S. military&#8217;s main installation on the peninsula in coming years under a U.S.-South Korea agreement.

On Wednesday, large earthmovers went about their work with a grinding, metallic squeal, smashing through aged cinderblock, wooden beams and corrugated metal roofing.

Houses broke apart quickly and laid in a heap of splintered wood, broken stone and dust. A foul smell hung over many of the wrecked houses.

The homes are in several farming villages within the 2,238-acre tract the South Korean government bought in 2005 to enable Camp Humphreys to expand.

Many residents left the area after the government paid them to move. Theirs were the homes demolished Wednesday, the Defense Ministry said.

But others, including some farmers and elderly residents, have refused to leave. Supporting them have been activist groups that often have mobilized thousands of protesters to the area for rallies against the expansion.

South Korean security forces seized control of the area from local activists in May. Its army has since turned the tract into a restricted-access military zone with concertina-wire barriers, water-filled trenches and a round-the-clock government troop presence.

In mounting Wednesday&#8217;s demolition effort, the Defense Ministry said it would not disturb any home that remains occupied.

About 18,000 South Korean riot police were present to safeguard the operation against protests.

&#8220;What a miserable situation,&#8221; said Father Mun Jyeong-hyeon, a Catholic priest who has been a key leader against the expansion. He and other activists watched Wednesday&#8217;s demolition from a rooftop in Daechu-ri. He accused the South Korean government of tearing down the buildings to &#8220;scare the people&#8221; still living in the area into leaving without resistance.

At times, activists on rooftops chanted slogans, thrusting their fists in the air. One woman spoke from a rooftop through a bullhorn, addressing the squads of young, dark-blue-clad riot police who were positioned at many points throughout the village.