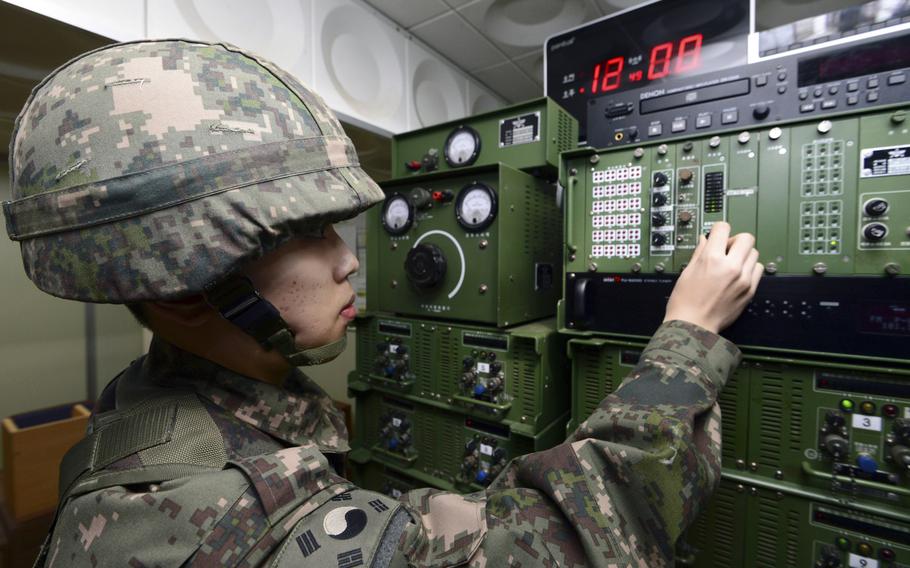 A South Korean soldier adjusts equipment used for propaganda broadcasts near the border between South Korea and North Korea Friday, Jan. 8, 2016. In response to North KoreaÕs latest nuclear test, South Korea has resumed blasts of propaganda and pop music across the Demilitarized Zone, which is likely to anger the North. (Lim Tae-hoon/Newsis/AP)

South Korea made a high-volume response Friday to North Korea’s latest nuclear test, resuming blasts of propaganda and pop music across the Demilitarized Zone. Similar actions before have irked Pyongyang so much that it threatened military action.

Given that the broadcasts escalated a crisis in August, British Foreign Secretary Philip Hammond asked South Korea to stop and give the international community a chance to impose effective sanctions against North Korea.

“We have to be bigger than the North Koreans,” Hammond told reporters during a visit to Japan. “We know responding in this way is simply rising to the bait North Korea is presenting to us.”

While experts doubt that the North’s fourth nuclear test Wednesday was a hydrogen bomb, a potentially much more powerful weapon that it has detonated before, it still has spawned concern, especially coupled with the reclusive country’s equally aggressive missile program.

While Aucoin said some of the North’s hardware is “not very high tech” — specifically mentioning submarines — its nuclear weapons and missiles are a threat.

The U.N. Security Council, whose previous sanctions have failed to dissuade North Korea from its nuclear ambitions, is considering what more it can do; efforts to further restrict the country’s economy by cracking down further on its international trade and banking links seem likely, along with better enforcement of the existing measures.

China recently agreed to work with South Korea and Japan to persuade Pyongyang to resume six-party talks on its nuclear program, but that and other efforts by Beijing also have failed to bear fruit. Secretary of State John Kerry on Thursday urged China, which has been showing increasing frustration at the North’s continued provocations, to take a harder line. The question is how far Beijing will go; the last thing it wants is collapse of the regime, which could send floods of refugees across its borders and lead to U.S. forces on its doorstep.

It’s unclear why North Korea chose to conduct another nuclear test now. Speculation has focused on leader Kim Jong Un’s apparent inability to consolidate power four years after taking over following his father’s death — he has carried out a number of bloody purges of top officials — and a need to rally the populace of the impoverished country with displays of military might.

He also reportedly wants direct talks with Washington, and the nuclear test put him right in the middle of the U.S. presidential race, where foreign policy already had become a major issue.

Stars and Stripes reporter James Kimber contributed to this report.