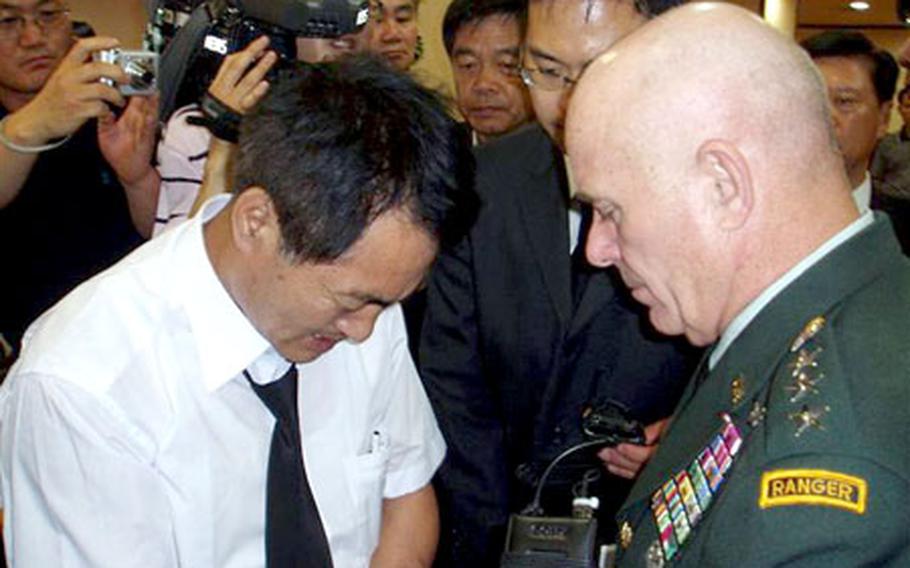 SEOUL &#8212; South Korean investigators are focusing on whether U.S. soldiers in a 2.5-ton truck could see the woman the military vehicle ran over Friday near Camp Casey, officials said.

The victim, whom funeral home officials identified as 51-year-old Kim Myung-ja, was pulling a yogurt cart on Yangu&#8217;s Peace Street at the time of the accident, police have said.

According to Chu, Bryant said he was unable to see the woman. Chu, however, said a preliminary investigation leads him to believe that Bryant should have been able to see the 5-foot-2-inch woman from his vantage point in the truck.

Daryliell said she saw the victim before the accident, according to Chu.

Chu said Daryliell asked Bryant twice about the woman, but that traffic noise apparently prevented him from hearing her warnings. Chu said it all happened within a few seconds.

Both Bryant and Daryliell will be brought to the station for further questioning next week.

An 8th Army spokesman, Lt. Col. Thomas Budzyna, said Monday afternoon &#8220;it would be inappropriate&#8221; for him to comment on details of the investigation until the probe is concluded. He added that U.S. officials are cooperating fully with the South Korean investigation.

&#8220;We completely respect their prerogative to conduct an investigation,&#8221; he said.

LaPorte also ordered a safety stand down, in which commanders throughout the peninsula &#8220;will stop non-emergency services and training to review safety procedures, discuss existing measures and develop improved procedures to prevent vehicular accidents,&#8221; according to a USFK statement.

Military officials said the family was given a solatium payment, which expresses remorse but not guilt.

Roh responded by thanking Bush for his &#8220;warm message of condolence regarding the unfortunate incident involving U.S. Forces Korea.&#8221;