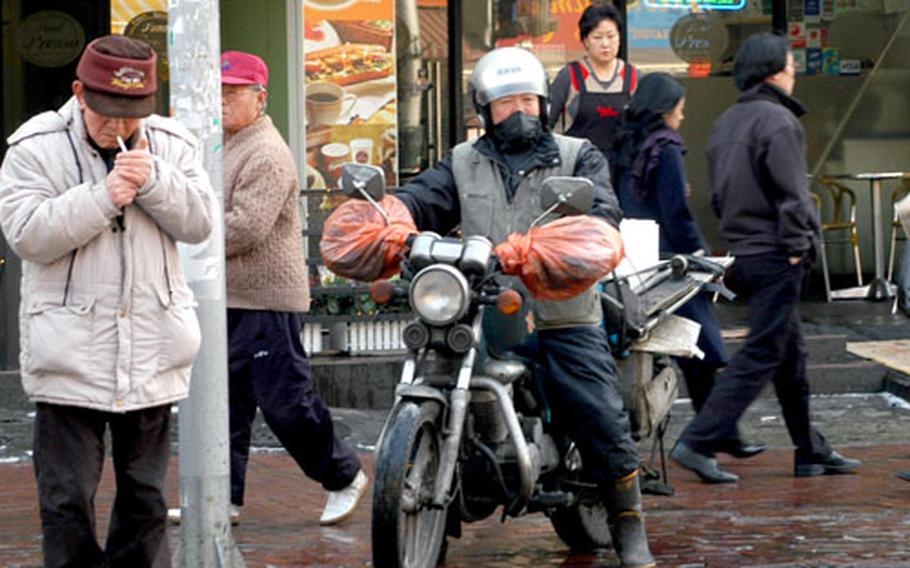 A motorcyclist waits on the sidewalk with pedestrians in Seoul, a common sight in a country rated as one of the worst for vehicle accidents. (T.D. Flack / S&S)

SEOUL &#8212; Overcrowded roads, jaywalkers and motorcyclists who use sidewalks as shortcuts make South Korea the most dangerous place to drive among 30 countries in the Organization for Economic Cooperation and Development, according to a report issued in late December.

The data, gathered from 2003 statistics, showed 137 car accidents per 10,000 cars on the road. South Korea also ranked worst for number of vehicle accident deaths for the year; for every 100,000 people involved in vehicle accidents, 15 died.

South Korea has topped the list since joining the organization in 1996, according to Lee Ui-yong, chief of the Traffic Accident Analysis Division with the Road Traffic Safety Authority.

Lee attributes many of the problems to South Korea&#8217;s rapid explosion of vehicle usage in the last three decades.

&#8220;It can be viewed in terms of the vehicle cultures between the developed countries and a developing country like South Korea,&#8221; Lee said.

In many countries, the horse-drawn carriage set the traffic culture foundation for the eventual transition to motor vehicles.

South Korea, however, experienced the vehicle boom in a relatively short period of time as the economy developed after the Korean War, leaving its people without a real sense of what to do on the roads, Lee said.

Lee said unsafe drivers aren&#8217;t the only problem. A lack of guardrails, correct traffic signals and pedestrians who jaywalk or dart into traffic add to the danger.

He said South Korea is going to launch a safety campaign this year to lower accident and fatality rates and promote the importance of traffic laws.

The U.S. military hasn&#8217;t been immune to the problem. In 2002, a tracked vehicle traveling in a military convoy crushed two South Korean girls walking on the side of the road, sparking massive protests against the U.S. presence on the peninsula. Earlier this year, a jaywalker was hit and killed by a U.S Army truck.

&#8220;There must be a logical explanation why driving in Korea is more difficult than in the United States,&#8221; according to the pamphlet. &#8220;At first glance, you can clearly see that there are many vehicles and too few roads to handle the traffic in an orderly manner.&#8221;

Pedestrians in South Korea have traditionally felt they have as much right to the roads as the vehicles, according to the pamphlet.

&#8220;This behavior creates a real hazard for you as the driver. It is wise to reduce speed when driving around pedestrians, especially children,&#8221; according to the pamphlet. &#8220;Pedestrians also become confused while crossing roads, often stopping suddenly and then moving into the paths of moving vehicles. A common occurrence is for pedestrians to run or walk into traffic lanes from the front or rear of halted or parked vehicles and other blind spots.