South Korea on alert over arrival of annual sandstorm dust 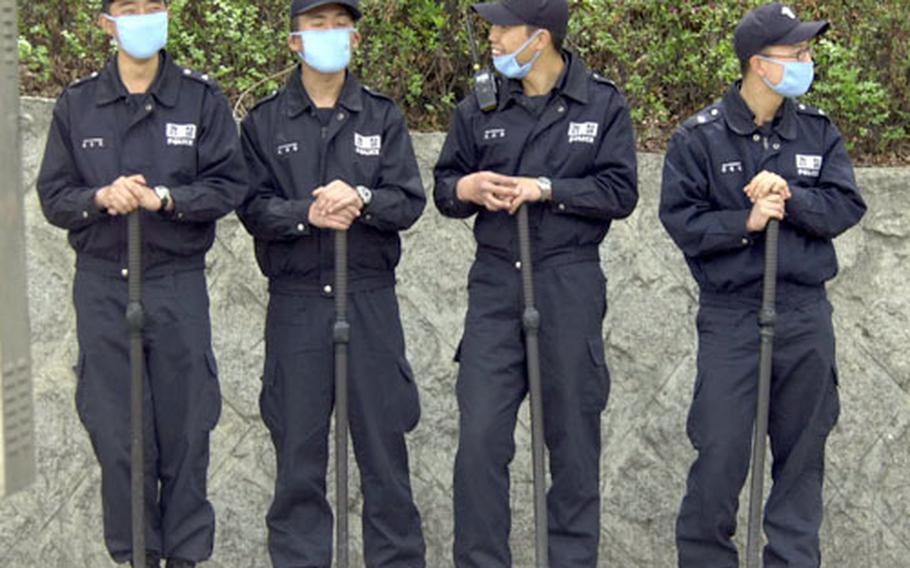 Korean National Police standing duty outside the U.S. Army&#39;s Yongsan Garrison in Seoul on Wednesday wear dust masks to protect themselves from the dust in the air. (T.D. Flack / S&S)

SEOUL &#8212; Korean Meteorological Administration officials put the country on the second-highest state of alert Wednesday morning as a sandstorm filled the skies with yellow dust.

Each spring, winds carry dust and dirt from the Gobi Desert across South Korea and Japan. The Koreans call the annual event whangsa, meaning yellow sand.

The dust aggravates asthma and bronchitis and can cause pinkeye, according to both South Korean and U.S. officials.

Officials at Yongsan Garrison&#8217;s 18th Medical Command, contacted Wednesday morning, said they were unable to discuss health concerns. No U.S. Forces Korea health advisories had been issued by Wednesday afternoon. USFK health officials have stated in previous interviews, however, that the dust contains heavy metals such as lead, cadmium, copper and aluminum and is a health hazard, irritating eyes and lungs.

The alert was issued at about 9 a.m. Wednesday, said Kim Seung-bae, a Korean Meteorological Administration spokesman. He said the worst of the storm was to hit Seoul midafternoon Wednesday and that it was to last through Thursday.

Kim said Wednesday&#8217;s dust levels were the highest of the year.

Jun Hae-sung, an official with the Health and Welfare Ministry&#8217;s Disease Control and Prevention office, provided a list of guidelines recommended during the sandstorms. The recommendations include: