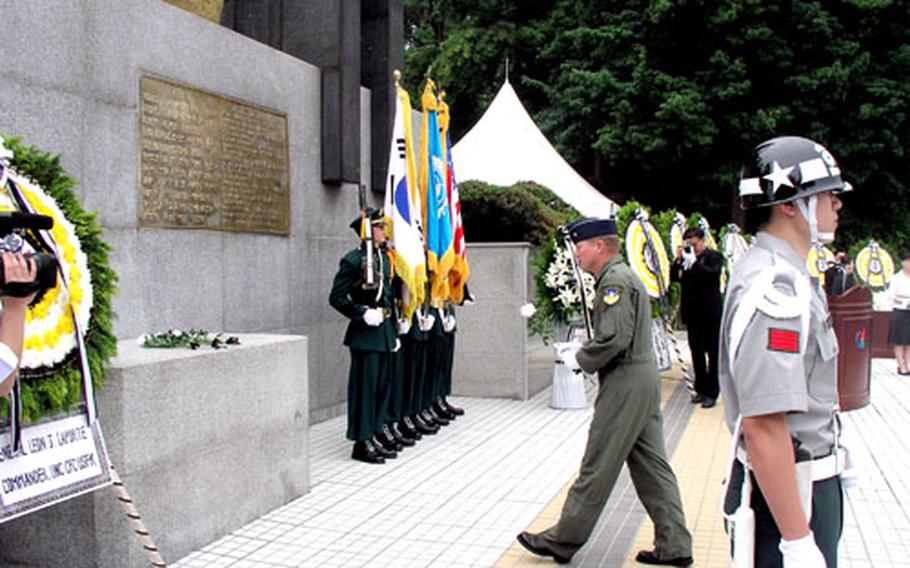 South Korean officials place flowers Tuesday at the foot of a monument to Task Force Smith. The ceremony marked the 55th anniversary of the battle between the outnumbered task force and columns of enemy tanks and infantry. (Franklin Fisher / S&S)

South Korean officials place flowers Tuesday at the foot of a monument to Task Force Smith. The ceremony marked the 55th anniversary of the battle between the outnumbered task force and columns of enemy tanks and infantry. (Franklin Fisher / S&S) 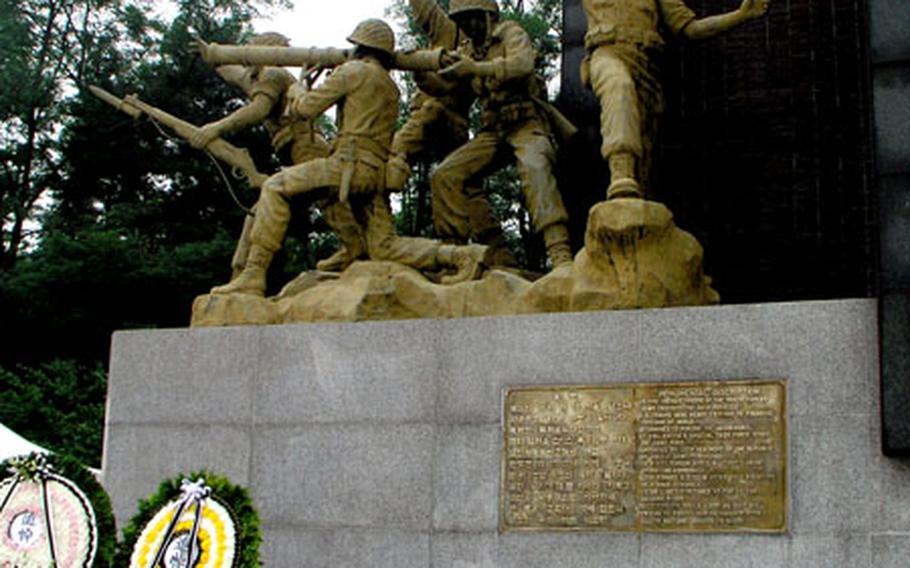 As a South Korean army band softly played hymns, a succession of officials placed flowers at the gray stone base of a monument in Osan City to mark the Korean War&#8217;s first ground engagement between U.S. and North Korean forces: the July 5, 1950, battle of Joong Mi Pass.

The task force sent more than 400 troops into the battle at Joong Mi Pass, where it suffered more than 100 casualties.

When North Korea invaded South Korea on June 25, 1950, the 24th Infantry Division was rushed to Korea from peacetime duty in Japan. It was among the first U.S. units to arrive.

By July 1950, North Korean tanks and infantry were pushing south along a highway toward Osan.

On July 5, Task Force Smith, the forward-most U.S. unit on the peninsula, moved to slow the North Korean advance, setting up a blocking position around 3 a.m. at the pass.

But when the North Korean force appeared that morning around 7 a.m., Task Force Smith&#8217;s recoilless rifles, mortars, 2.36-inch bazookas and 105 mm howitzers were unable to stop the Soviet-made T-34/85 tanks.

North Korean infantry assaulted the outnumbered Americans. By the afternoon, the task force fell back toward Taejon.

There, on July 20, the remainder of the 24th Infantry Division again tried to stop the North Koreans but was pushed back behind the Naktong River into what became known as the Pusan Perimeter.

Acting Osan City Mayor Lee Jung-yeol said: &#8220;I give the warmest tribute to the memory of brave souls who gave their precious life for the preservation of peace and freedom.&#8221;