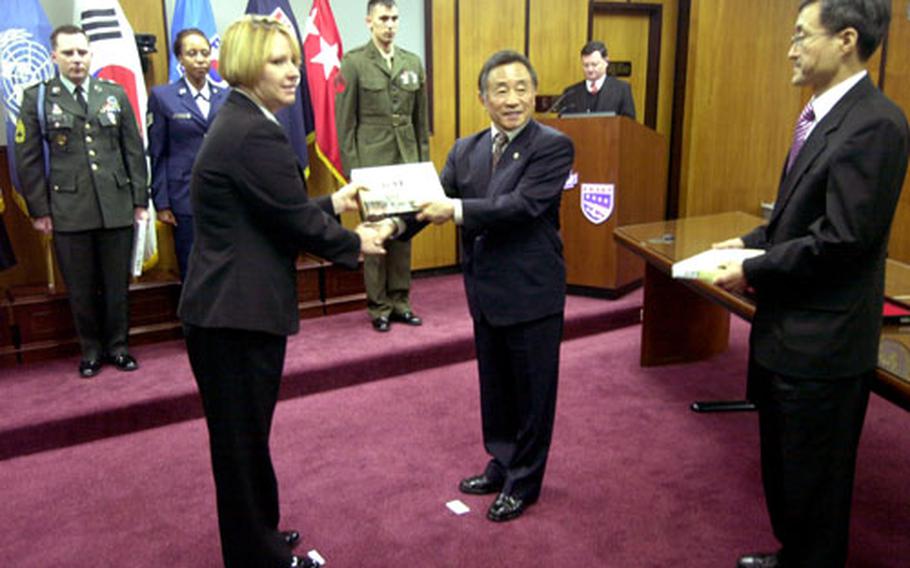 YONGSAN GARRISON, South Korea &#8212; Christmas came a bit early this year as the South Korean government delivered tens of thousands of gifts to the U.S. military on Friday.

Park Yu-chul, the minister for Patriots and Veterans Affairs; Chung Eui-hwan, director general for the Veterans Bureau; and Chung Il-kwun, chief of the Seoul Regional Office; attended a ceremony at the military&#8217;s headquarters building on Yongsan Garrison to mark the beginning of the annual event.

Park told a conference room packed with members of all the branches of service and U.S. Forces Korea commander Gen B.B. Bell that giving a present to each member of the U.S. military on the peninsula was very meaningful as they carry out their &#8220;vital mission&#8221; far away from family and friends during the holidays.

Park said he hoped the troops understand that the Korean government and people appreciate their sacrifices.

The minister also presented donations to the University of Maryland and Central Texas College. Each school received a check for 5 million won, about $5,000, to purchase reference books and materials for the U.S. troops enrolled in their programs.

Bell thanked the visitors for their &#8220;generosity and thoughtfulness&#8221; and said he looked forward to the day when the barbed-wire gifts would be a reminder of a DMZ that no longer stands between the nations.

The 36,000 gifts were to be delivered to troops starting Friday, according to the U.S. military. The framed wire typically sells for about 12,000 won, or about $12.