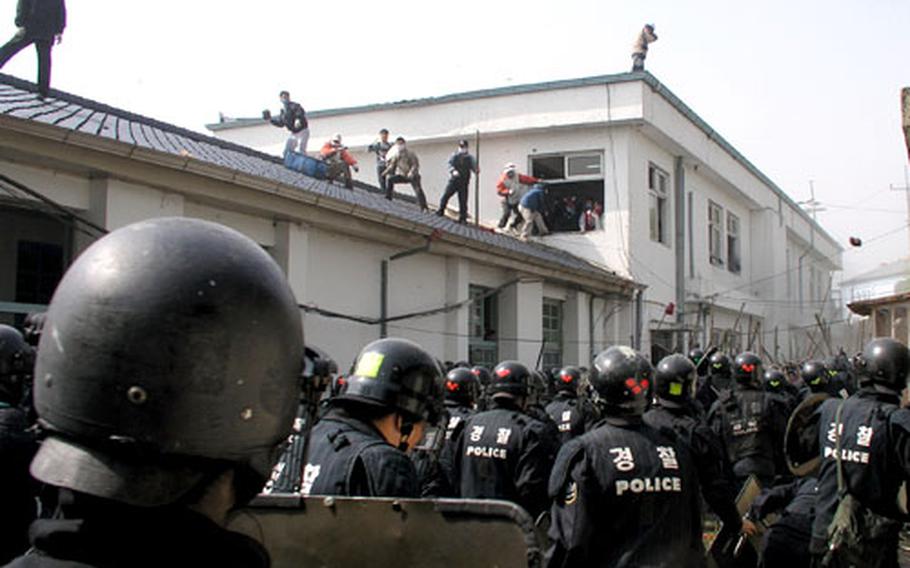 South Korean riot police sweep behind the Daechu-ri Elementary School on May 4 during an operation to oust barricaded protesters from the school grounds. Protesters on roof pelted police with a variety of objects, including furniture and window frames. Once police had gained control of the building, government work crews tore it down. (Franklin Fisher / S&S)

Some 20,000 protesters from various locations were set to hold two major rallies, Saturday in Seoul, and Sunday in Pyeongtaek, police and South Korean government officials have said.

The protesters oppose a South Korean-U.S. agreement that calls for U.S. forces to relocate from Seoul and points north to Camp Humphreys, which eventually would triple in size and become the peninsula&#8217;s primary U.S. military installation.

But Lee has withheld official sanction of Sunday&#8217;s Pyeongtaek demonstrations because of a high probability of &#8220;fierce violence.&#8221;

A South Korean government official said authorities expect more than 10,000 protesters from around South Korea to take part in Sunday&#8217;s demonstrations. The KNP will deploy additional forces to the area for the weekend protests, the official said.

Activists said Sunday&#8217;s events would include a rally in Daechu-ri village near Camp Humphreys &#8212; site of severe May 4-5 clashes between protesters and South Korean security forces.

Soldiers were digging trenches inside a concertina-wire barrier and filling them with about three feet of water. They also were backing the barrier with a five-foot high bank and have placed 20 barricades on roads into Daechu-ri.

As of Thursday, about 6,000 engineer troops and about 2,000 riot-equipped KNP officers were on duty in the zone, officials said.

Among key organizers of the rallies, police said, were the Pan-Korean National Task Force Against Expansion of U.S. Bases in Pyeongtaek; the Korean Confederation of Trade Unions; and college associations.

Activists said part of the weekend&#8217;s events would include an observance in Daechu-ri of the event that sparked the 1980 Gwangju movement, which they contend bears similarities to their conflict with the government over the Camp Humphreys expansion project.

Large number of protesters died when South Korean troops were sent in to crush protests demanding elections and an end to martial law. The event remains one of the most controversial and traumatic in modern South Korean history.