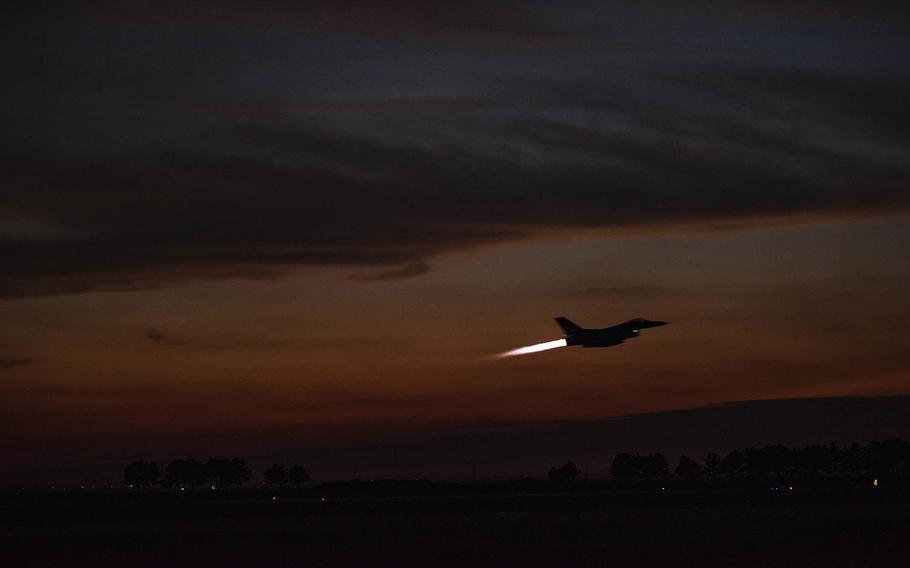 PYEONGTAEK, South Korea — A dozen jets and more than 100 Kunsan-based airmen are back in South Korea after spending nearly a month dogfighting over Alaska.

The F-16 Fighting Falcons of the 80th Fighter Squadron, 8th Fighter Wing arrived at Eielson Air Base, near Fairbanks, Oct. 10 for the two-week Red Flag exercise before moving on to smaller, weeklong Distant Frontier drills.

“It’s something that’s not possible routinely on the [Korean Peninsula],” Miranda told Stars and Stripes in a recent phone interview. The Kunsan jets flew between 10 and 20 sorties daily and partnered with the Marines, Navy and Army, he added.

But Red Flag almost didn’t take off for the unit due to the heavy typhoon season.

“We had a bit of delay because of the weather,” Miranda said, adding that the exercise was postponed about a week after Typhoon Trami pummeled Japan and Okinawa.

Even with the weather delay and a bit of snow in Alaska, Miranda said spirits were high during the exercises, which test his jets’ ability to deploy worldwide.

“All the airman love doing the jobs they’re assigned to and doing it in a different location just adds a different flavor to their day-to-day work,” he said.