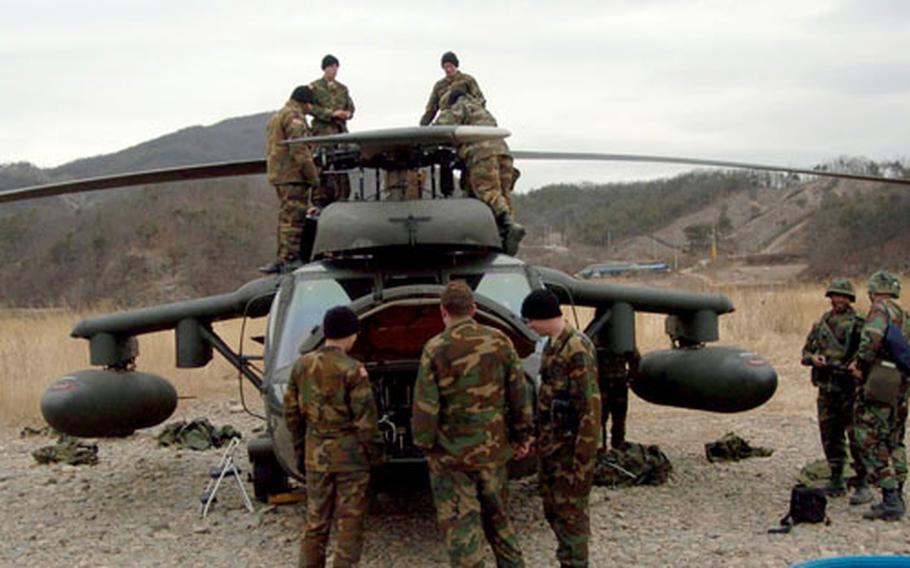 At a training range in South Korea in February 2005, soldiers of the 2nd Battalion, 52nd Aviation Regiment do maintenance on a UH-60 Black Hawk helicopter. The battalion, part of the 2nd Combat Aviation Brigade, will get a new name Monday at Camp Humphreys. (Daniel J. Love / U.S. Army)

PYEONGTAEK, South Korea &#8212; The Army&#8217;s South Korea-based helicopter battalion, whose main job is evacuating noncombatants from the peninsula during a crisis, is getting a new name.

The &#8220;reflagging&#8221; is part of the ongoing Armywide transformation of its aviation units into what are known as combat aviation brigades, said 1st Lt. Brad DeLoach, the battalion&#8217;s adjutant. Such structures merge various Army aircraft types into a single brigade.

The reflagging will give the battalion a name that matches the unit-naming format now standardized among all combat aviation brigades Armywide, he said.

The 2nd Infantry Division Band will take part in the outdoor ceremony, which is to be at &#8220;Tiger Ramp,&#8221; a former helicopter taxiway outside the battalion&#8217;s Delta Company hangar, Building 1029, DeLoach said.

The 2nd Battalion, 52nd Aviation Regiment has about 500 personnel and currently consists of the following elements:

Both companies with the VIP mission are based at Seoul Air Base, also known as K-16, DeLoach said.