South Korea base in midst of $1 billion makeover A construction worker assembles parts inside the Wolfpack Lodge, scheduled to open in December. The 200-room lodge is one of 44 construction projects under way at Kunsan and will replace the aging 104-room hotel now used to house visitors as well as arriving and departing personnel. (Ashley Rowland / S&S)

A construction worker assembles parts inside the Wolfpack Lodge, scheduled to open in December. The 200-room lodge is one of 44 construction projects under way at Kunsan and will replace the aging 104-room hotel now used to house visitors as well as arriving and departing personnel. (Ashley Rowland / S&S) 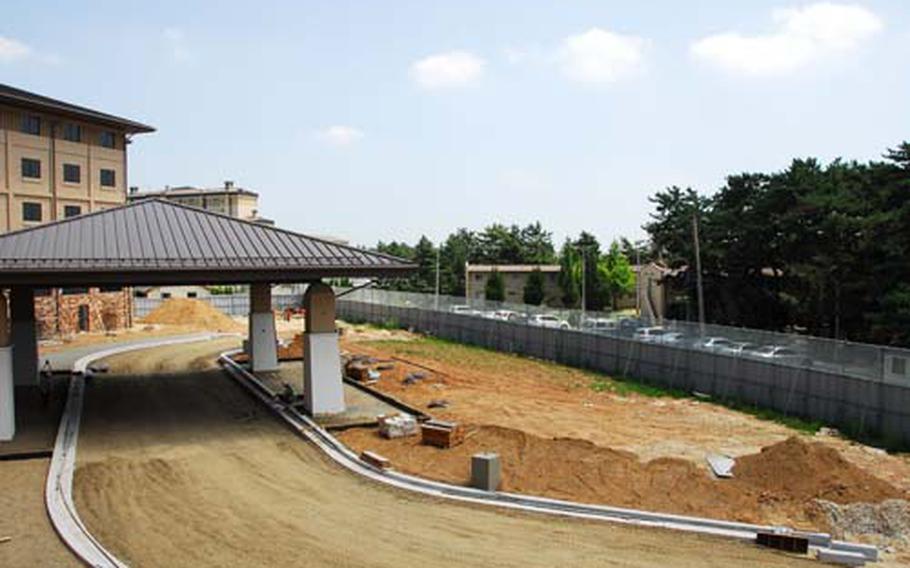 The lodge will replace the aging three-building Seaside Inn, which includes the two buildings on the right. (Ashley Rowland / S&S)

KUNSAN AIR BASE, South Korea &#8212; Come back to this tiny base on the edge of the Yellow Sea in 10 years, and you might not recognize it.

Construction is under way on 44 projects, from new high-rise dorms to a renovated Patriot missile battery site. Another 266 projects have been planned or are awaiting funding.

In total, the overhaul to a base that houses 2,600 troops and suffered from neglect for years will cost a whopping $1 billion.

To put it in perspective, that&#8217;s one-thirteenth of the cost of expanding Camp Humphreys, the U.S. military base that is tripling in size and will eventually house 17,000 troops, the bulk of the 28,500-strong U.S. military presence here.

Kunsan airmen and base officials have said for years that routine repairs were not made to the base because it was once scheduled for closure, though 7th Air Force historian David Schepp said there is no record of such a plan.

What is certain is that many of Kunsan&#8217;s buildings and infrastructure &#8212; from its dorms with malfunctioning air conditioning to its corroded water pipes &#8212; were not updated.

"We probably went through five or 10 years of neglect," said Col. Jerry Harris, former commander of Kunsan&#8217;s 8th Fighter Wing, who was replaced in a change of command ceremony on Tuesday. "We probably treated [the base] as a renter instead of an owner."

Harris said the base has to revamp its infrastructure just to be livable. Because the improvements are so expensive &#8212; and because there&#8217;s not much vacant land that could be used to expand the base and build family housing &#8212; Kunsan is unlikely to have command-sponsored billets anytime soon, he said.

"If we bring families here now, they might not be happy with the rustic conditions," he said. "I think [command sponsorship] will happen. It&#8217;s just going to take time."

USFK will eventually allow half of its troops to bring their families with them to South Korea.

Maj. Denise Kerr, spokeswoman for the 7th Air Force, said in an e-mail that Kunsan is unlikely to get command-sponsored billets before 2020.

One of the biggest construction projects under way is the $28 million, 200-room Wolfpack Lodge, scheduled to open in December. The new billeting will replace the 104-room Seaside Inn, an aging collection of two-story buildings, including one that has been condemned and will be torn down this fall.

Lodging manager Sam Sansone said Kunsan needs a hotel that meets Air Force standards on room size and private bathrooms &#8212; all but eight rooms at the Seaside Inn share bathrooms &#8212; and has enough room to house visitors and transitioning airmen.

Two new dorms have opened in the past two years, replacing dorms with heating and air systems that often didn&#8217;t work, and two more are scheduled to open in the fall of 2010.

Capt. Brad Ledford, who oversees construction at Kunsan, said the base&#8217;s very location, on a floodplain on the edge of the Yellow Sea, makes it hard to maintain.

He said the ocean salt has corroded the base&#8217;s utility systems, and the summer monsoons "do a real number" on its stormwater drains, filling them with sand and mud.

One system that has suffered from neglect is Kunsan&#8217;s water treatment plant. Plans to expand its capacity have been delayed repeatedly, but construction on a new $10.5 million plant &#8212; paid for by South Korea &#8212; is scheduled to begin next spring.

South Korea will also pay $21.5 million for the construction of buildings in a new Aircraft Maintenance Complex, Ledford said. Work on the South Korean-funded fabrication shop and an armaments shop is also scheduled to begin next spring.