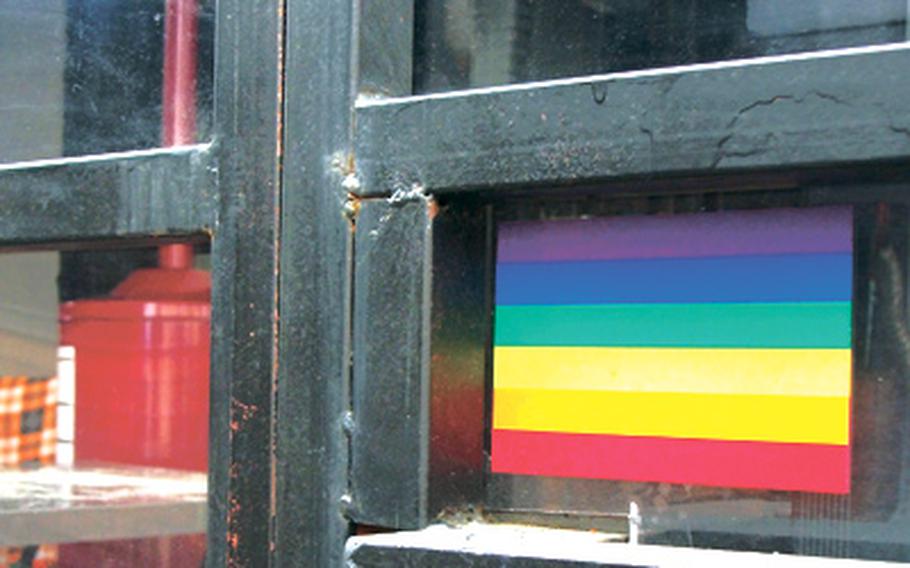 A rainbow sticker hangs in the window of a lounge in Seoul&#39;s gay-friendly Homo Hill district, which attracts both gay and straight customers, including U.S. troops. (Ashley Rowland / Stripes)

A rainbow sticker hangs in the window of a lounge in Seoul&#39;s gay-friendly Homo Hill district, which attracts both gay and straight customers, including U.S. troops. (Ashley Rowland / Stripes) 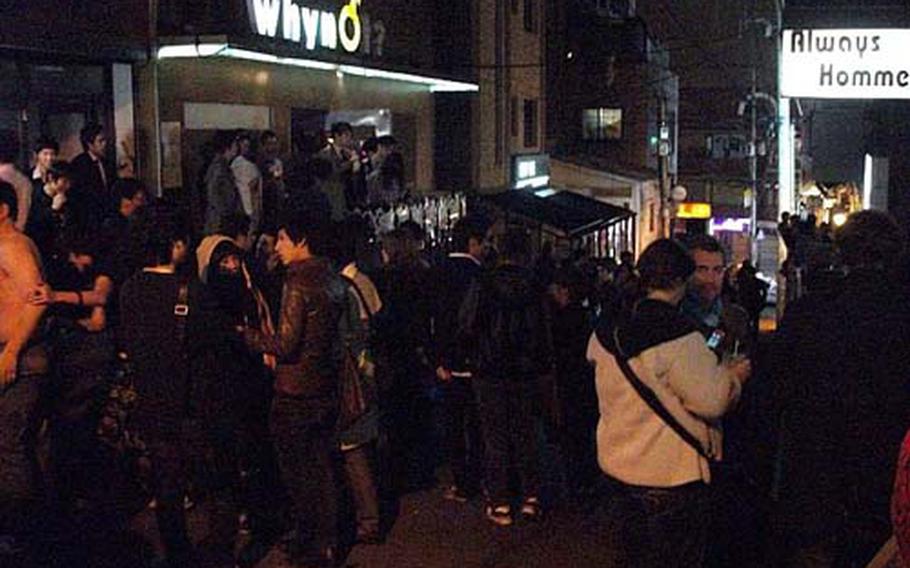 SEOUL - It&#8217;s a Saturday night, and cheers erupt from the all-male crowd as a slender South Korean man wearing a sparkling silver dress and matching headpiece walks through the door of a standing room-only bar.

The din grows louder when the bartender passes out free shots and playfully shouts, &#8220;Drink up, bitches!&#8221;

Outside, it feels more like a street festival than a bar district, as customers &#8212; both South Koreans and foreigners, but mostly young, male and gay &#8212; mingle with drinks in hand, flirting and occasionally kissing on the narrow road known locally among gays and straights alike as &#8220;Homo Hill.&#8221;

Among them are U.S. soldiers, who on recent visits by a reporter to the area made up a noticeable number of the Hill&#8217;s clientele despite the threat they face of being discharged from the military for having homosexual relationships.

This cluster of trendy bars, with names like &#8220;Queen&#8221; and &#8220;Always Homme,&#8221; is a 10-minute walk from Yongsan Garrison, the U.S. military&#8217;s flagship base in South Korea. The Hill is one of the few places gay and lesbian U.S. servicemembers can be somewhat open about their sexuality while stationed in the country.

&#8220;This is the perfect place, if you&#8217;ve never been [openly] gay before, to come out,&#8221; said an Army medic stationed at Yongsan, who, like other gay soldiers in this story, consented to be interviewed only on condition that he not be identified.

U.S. troops are not banned from visiting gay bars, though the military&#8217;s embattled &#8220;don&#8217;t ask, don&#8217;t tell&#8221; policy prohibits gay soldiers from openly declaring their sexual orientation. The 17-year-old policy, which President Barack Obama wants to overturn, is under review by the Pentagon this year.

The scene on the Hill is an example of how the military lives uneasily with the &#8220;don&#8217;t ask, don&#8217;t tell&#8221; policy. Joint patrols of uniformed American military police and South Korean police, as well as &#8220;courtesy patrols&#8221; of U.S. officers and enlisted soldiers, regularly walk through the district, but they rarely question anyone there, according to gay servicemembers.

&#8220;They go out there as a show of force, of soft power,&#8221; said garrison spokesman Dan Thompson. If the courtesy patrol observes someone breaking the law, South Korean police have to intervene, he said.

And the soldiers on the patrols don&#8217;t look for evidence of homosexuality among servicemembers either.

&#8220;It&#8217;s a private issue,&#8221; Thompson said, adding that officials have never received a reported incident of homosexual activity in the garrison among servicemembers or Defense Department civilians. &#8220;This obviously is not a pressing matter requiring garrison attention.&#8221;

The Hill, tucked on a side road next to the seedy &#8220;Hooker Hill&#8221; red-light area, looks like any other street in the tangle of neon-lit alleys in Itaewon, the entertainment district bordering Yongsan, except for the predominantly male crowds at its half-dozen or so bars.

&#8220;Itaewon is the capital of gay Korea,&#8221; said Hong Suk-chun, an actor who announced he was gay in 2000 and thus became the first well-known South Korean to come out of the closet. He lost his television and movie jobs and was out of work for several years.

Ten years later, homosexuality is still largely taboo in South Korea. But Hong said acceptance has increased dramatically, particularly among young South Koreans. Today, he is acting again, and he said he&#8217;s more likely to get hostile comments about his sexuality walking down the streets of New York City than in Seoul.

&#8220;When they are here in Korea, I think basically they feel very safe,&#8221; said Hong, who owns four restaurants in Itaewon.

On several occasions, a reporter observed American soldiers holding hands, hugging and kissing in the gay district, which also draws straight customers. But some troops said they were reluctant to show affection in case their straight co-workers accidentally wandered into a bar and saw them.

Several people interviewed said they were concerned that a Stars and Stripes story about the Hill might encourage U.S. Forces Korea to put the area off limits, or prompt straight soldiers to hang out at the bars in order &#8220;out&#8221; their gay colleagues.

But the Yongsan Garrison commander, Col. David Hall, said in a written statement that an area would not be placed off-limits solely because it is a gay bar district.

Most soldiers interviewed said that at least some of their co-workers knew they were gay, with their level of openness usually depending on the culture within their office. Often, they said, their commanders didn&#8217;t care about their sexuality, particularly if they had gay family members or friends.