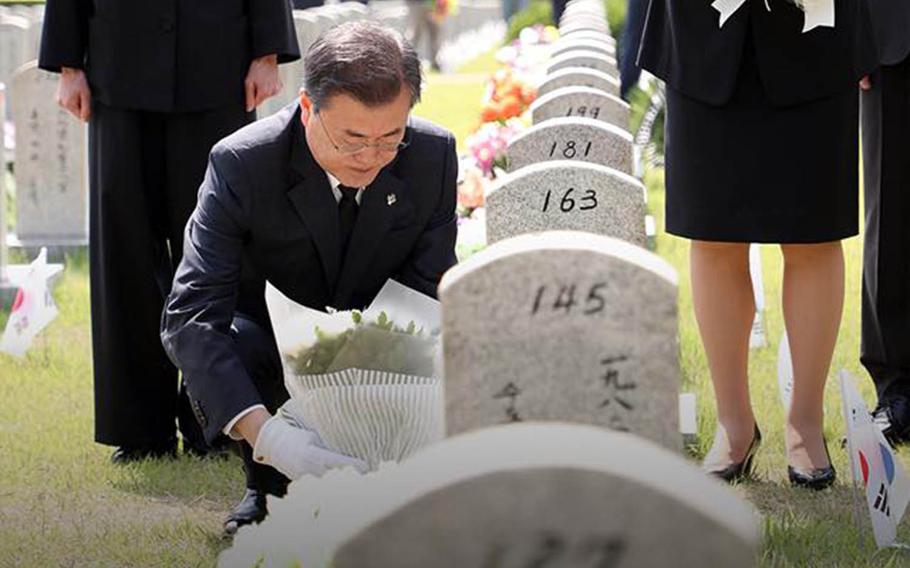 President Moon Jae-in pays tribute to a South Korean soldier killed during the 1950-53 war during a Memorial Day ceremony at the Daejeon National Cemetery, Wednesday, June 6, 2018. (Courtesy of the Blue House)

SEOUL, South Korea – While attention is focused on North Korea’s promise to return the remains of American troops believed lost in the 1950-53 war, South Korea is quietly engaged in an ongoing effort to locate war dead on its side of the border.

The search for about 124,000 South Koreans who remain missing in action has been complicated by a late start and the rapid industrialization of the Asian powerhouse.

Some 10,000 sets of remains have been unearthed since the recovery project started in 2000, but only 128 have been identified, according to the Ministry of National Defense’s Killed in Action Recovery and Identification unit, known as MAKRI.

The unit also has found 14 American remains and plans to return the final set to the U.S. military in a repatriation ceremony next month, a MAKRI official said, speaking on condition of anonymity in exchange for providing the details.

The issue has come to the fore since North Korean leader Kim Jong Un agreed during his June 12 summit with President Donald Trump to commit to returning the remains of Americans lost in his country.

South Korean President Moon Jae-in also has said he hopes to use the burgeoning goodwill with the North to send teams to retrieve remains from the Demilitarized Zone that divides the peninsula.

The MAKRI official estimated that the remains of about 10,000 South Korean soldiers and roughly 2,000 Americans may be buried in the DMZ, a 2.5-mile wide no man’s land dotted with landmines and lined with barbed wire.

South Koreans had to prioritize survival and reconstruction as they faced severe economic hardships after the war, which devastated Seoul and other areas. New challenges emerged as the South experienced rapid industrialization and urban sprawl that endangered potential recovery sites.

But interest in excavating remains surged in 2000 when the South marked the 50th anniversary of the start of the war, leading to the formation of MAKRI.

The official said the identification of remains has proven particularly challenging because many survivors who could have contributed DNA have died. The agency has launched a campaign aimed at persuading people to donate samples.

“We only have 40,000 DNA samples from bereaved families right now,” the official said, adding that other hurdles include the lack of family records when the war broke out and construction on potential recovery sites.

“It’s hard to look for remains. We have been trying to search for them based on things like verbal evidence from war veterans and so on,” the official said. “But lots of South Koreans who fought in the Korean War or their families have already passed away.”