South Dakota unit warms up to a winter on Guam 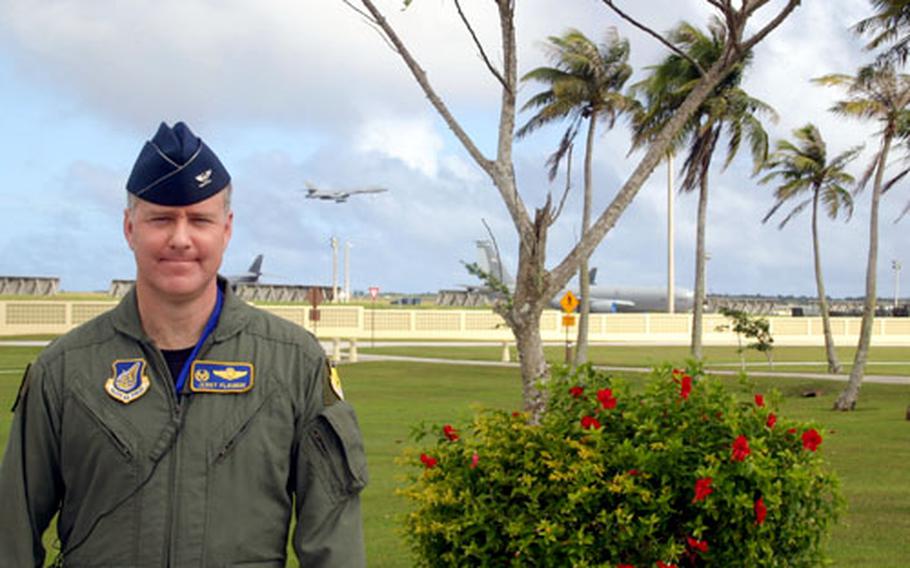 Col. Jerry Plourde, commander of the 36th Expeditionary Operation Group out of Ellsworth Air Force Base, S.D., began a four-month deployment with his unit at Andersen Air Force Base, Guam, this week. (Frank Whitman / S&S)

Airmen from the 28th Bomb Wing at Ellsworth Air Force Base, S.D., arrived in Guam during the past week for a four-month deployment at Andersen Air Force Base.

In addition to contributing to the Pacific region&#8217;s security, the aircrews will gain valuable experience, officials said.

The deployment &#8220;gives us a tremendous training opportunity, especially for our young aviators who have never flown in the Pacific region,&#8221; said Col. Jerry Plourde, 36th Expeditionary Operation Group commander. &#8220;We&#8217;ll get to fly in exercises all over the Pacific &#8212; over land and over water with the Navy.&#8221; Personnel will have the opportunity to become familiar with regulations and procedures in the Pacific Command and &#8220;just flying over open water &#8212; we don&#8217;t get a chance to do that very often in South Dakota.&#8221;

The Pacific deployment likely will include the opportunity for joint training with the Japanese Air Self-Defense Force and use of the live bombing range at Farallon de Mendinilla in the Northern Marianas.

Guam&#8217;s golf courses likely will present another opportunity unavailable in South Dakota during the winter months.

&#8220;I am looking forward to that,&#8221; Plourde said of playing golf, adding that his handicap is classified.