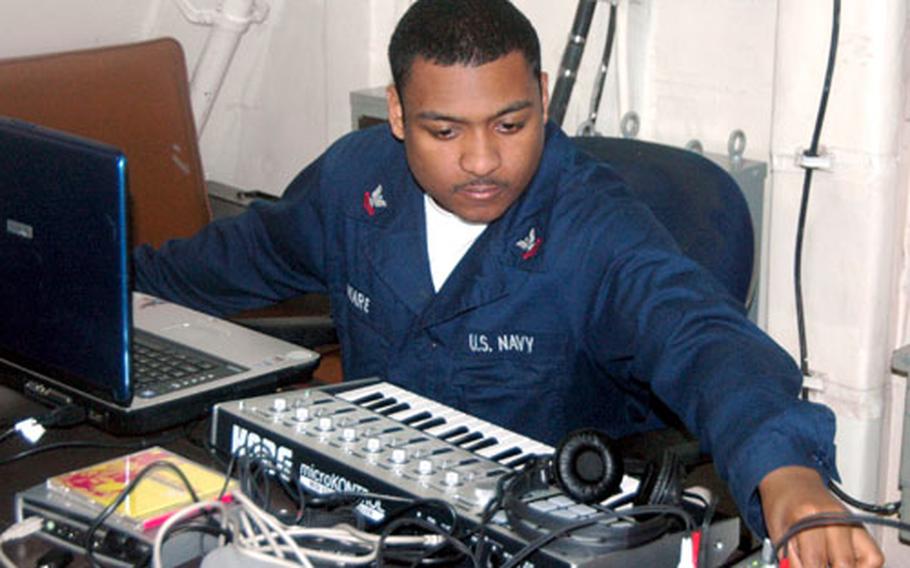 YOKOSUKA NAVAL BASE, Japan &#8212; Whether at sea or in the club, Petty Officer 2nd Class Frank Ware is here to rock the house.

As a fire control systems technician, Ware spends eight to 10 hours a day working on maintaining the computer and mechanical components of one of USS Kitty Hawk&#8217;s missile self-defense systems.

As an aspiring rapper-producer, Ware spends his off time mixing, writing and producing his own music.

Ware &#8212; originally from Jacksonville, N.C. &#8212; said Tuesday he has been into music, whether break dancing or DJing or creating, since childhood. But as Ware grew older, he decided to explore a career in the armed services.

To his surprise, he found that his musical aspirations combined well with his military service. Using a laptop computer, a keyboard and a mixer, Ware created a sea-going recording studio.

According to Ware, being in the military is the perfect environment to hone many of the necessary skills needed to succeed in the music industry: how to work long hours, a willingness to travel and how to live out of a suitcase.

Ware&#8217;s supervisor, Petty Officer 1st Class R.Q. Hooks, said it&#8217;s important for every sailor to have a creative outlet. And in Ware&#8217;s case, Hooks said, that outlet is both good for morale and entertaining.

Ware combines multiple styles of music. When pressed to describe his sound, he said it is a cross between rapper Kanye West and the production duo of Pharrell Williams and Chad Hugo, aka The Neptunes.

The sailor said he is juggling several different music projects. &#8220;I am putting together my second CD, as well as working with other musicians aboard Kitty Hawk to record a compilation CD,&#8221; he said.