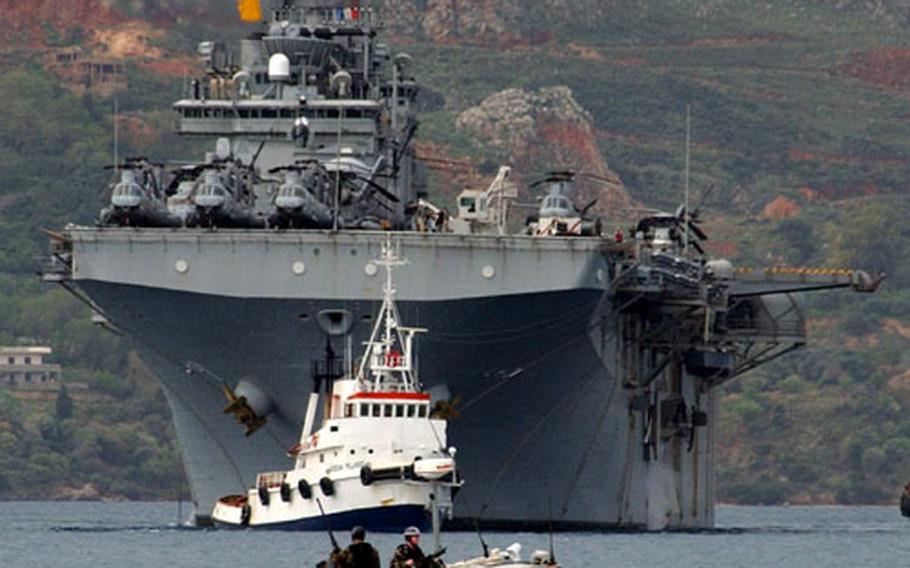 The USS Wasp pulls into Souda Bay, Crete, in March 2002 as members of the base&#39;s port security unit sail nearby. Souda Bay was recently awarded the Secretary of the Navy&#39;s Meritorious Unit Commendation for its role in operations between Sept. 11, 2001, and Sept. 30, 2002. (Courtesy of U.S. Navy)

The small Navy detachment of about 700 military and civilians provided security and support for military ships and aircraft heading to, or operating in, the Mediterranean, Middle East and Asia.

The Navy recently recognized the command&#8217;s work by awarding it the secretary of the Navy&#8217;s Meritorious Unit Commendation for Sept. 11, 2001, to Sept. 30, 2002. This award is given to a Navy or Marine Corps unit that distinguishes itself among units performing similar missions. The unit gets a citation and sailors who were with the unit during that time get a ribbon for their uniforms.

According to the commendation, Souda Bay was recognized for providing security for, and supporting, both air and ship operations. During that time, Navy and Air Force reconnaissance squadrons, five Air Force refueling squadrons, and hundreds of transiting ships were based there.

About 750 Afghanistan-bound flights were refueled by Souda Bay-based aircraft and more than 200 tons of ammunition were moved by ships stopping at the port.

Base executive assistant Bruce Gale, who has worked on base since August 1991, said that Sept. 11 hit everyone hard, but the command had already ramped up both security and operations.

Otto said that his port security detachment went from about 50 people to 300 and is now down to about 200. Reservists augmented the active-duty staff, many of whom had previous experience at Souda.