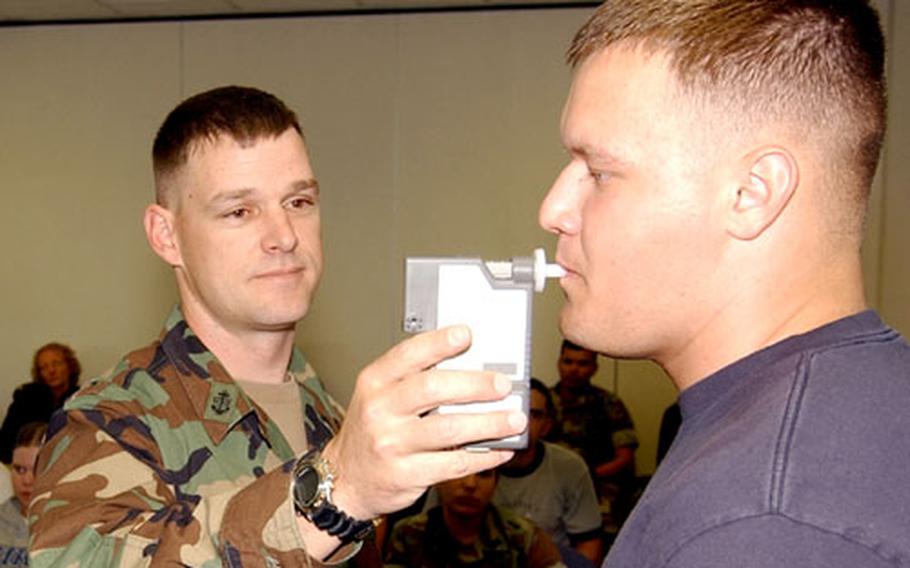 Most sailors don&#8217;t know how to drink, so Master Chief Petty Officer Jerry Daniels is going to show them.

When Daniels checked in as the command master chief at Naval Support Activity Souda Bay, he wanted to know how young sailors learn to drink.

Most sailors, he said, had never learned how to drink responsibly.

Since those under 21 can drink legally &#8212; on- and off-base &#8212; in Souda Bay, Daniels wanted to ensure that the sailors knew all about alcohol before it could become a problem.

So the command&#8217;s chief petty officers created the Team Souda 21 program, which is required for all arriving sailors under 21. And until they complete the program, the sailors aren&#8217;t allowed to drink.

The program is a mix of classroom instruction and computerized training courses. Instruction ranges from the monetary effects that arise from alcohol-related incidents to stress management.

&#8220;We try to show them &#8230; how [alcohol abuse] affects the Navy, their careers, their families and their friends,&#8221; said program instructor Chief Petty Officer Ralph Oyster, who also serves as the command&#8217;s drug-and-alcohol program adviser.

The program isn&#8217;t designed to replace existing programs, such as the Personal Responsibility and Values: Education and Training, or P.R.E.V.E.N.T., course. P.R.E.V.E.N.T. covers a broad area of behaviors, including drinking, but Souda&#8217;s program focuses entirely on responsible drinking.

Part of the Souda program, for a few volunteers at least, actually involves drinking. One classroom session includes volunteers having two drinks in a 40-minute period, then measuring the effects with a breathalyzer every 20 minutes.

Daniels said he hopes that the program won&#8217;t just keep sailors from having alcohol-related incidents during their tours at Souda Bay, but the lessons will follow them for their entire lives.

And in a small command like Souda Bay, on a relatively small island like Crete, alcohol-related incidents not only affect the sailors and their jobs, but also local community members and their perceptions of the Navy.

Petty Officer 3rd Class Cherie Day, 20, is on her second 12-month tour in Souda Bay. She says the program&#8217;s had a positive impact on the junior sailors and should be implemented Navywide.