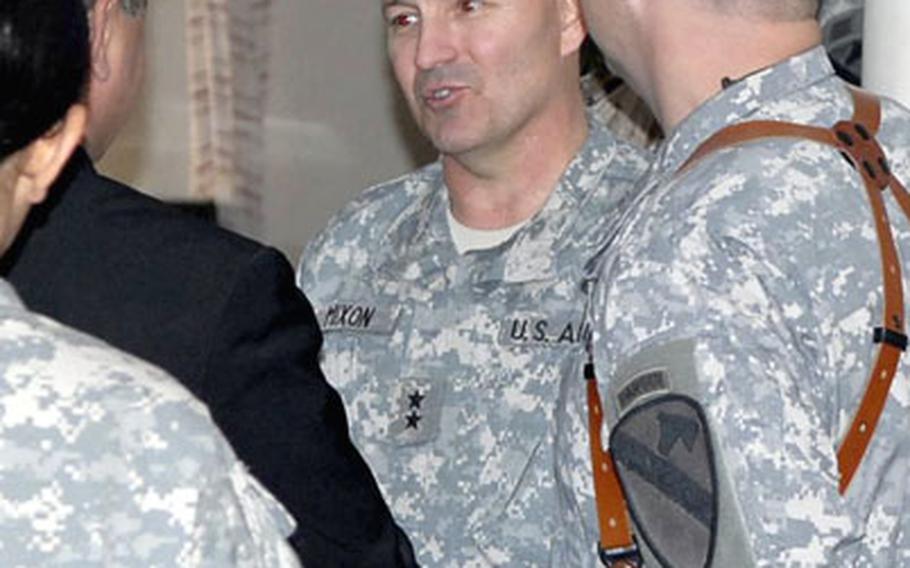 Maj. Gen. Benjamin Mixon, with a cadre of U.S. troops around him, meets members of Diyala’s provincial council on Monday in Baqouba, Iraq. (Zeke Minaya / S&S)

BAQOUBA, Iraq &#8212; Maj. Gen. Benjamin Mixon came here to the seat of Diyala province on Monday to prop up the beleaguered governor. He came to stoke the resolve of the frayed and divided provincial council. He came to revive stalled reconstruction.

The meeting with the council, however, did not get off to a flying start. After his opening remarks, Mixon, in charge of U.S. forces in northern Iraq, listened politely as a former Iraqi general lectured him about tactics.

The gray-haired councilmember told Mixon that in 15 days he could wrest back the city from sectarian clashes and reopen the shuttered school, government offices and shops.

He then explained, in gentle terms, the implausibility of the plan.

And so went the meeting, between rounds of strong, sweet tea and the frequent interruption of ringing mobile phones in the audience.

Though making strides in other areas of the relatively peaceful north, coalition forces have struggled with Diyala, where they face an ineffective local government, entrenched factionalism, and lawlessness.

And there are added concerns that with the push in Baghdad, insurgents will flee north, adding another front to the battles in Baghdad and Anbar province.

The governor told Mixon that he feared disruptions were filtering in from both directions. &#8220;We can call them insurgents, we can call them militia, but they are all the same,&#8221; he said through a translator.

Part of the work in defeating insurgents in Diyala is the building of institutions. And as he waded into the political arena, Mixon brought one of the most potent weapons in his arsenal: his presence.

Seated next to the governor in a sign of support, Mixon exhorted the council to gather under a single banner. They must &#8220;represent all the people of Diyala,&#8221; he said, &#8220;no matter their political party, whether they are Sunni, Shia or Kurd.&#8221;

Diyala, however, is often referred to as &#8220;Little Iraq&#8221; because its population mirrors the same volatile demographic mix as the wider country. Roughly half of its 1.8 million people are Sunni. But because they boycotted elections two years ago, power over local government and its security forces have been ceded to the Shiites.

Turning to Baghdad is not an option.

&#8220;The central government is difficult to work with; inefficient and sometimes corrupt and doesn&#8217;t know what&#8217;s going on in the provinces,&#8221; Mixon said. The solution must come from the council seated in front of him and the people of the province, he said.

One councilmember told the general that security concerns have made a working government impossible. &#8220;From the lowest laborer to the highest-ranking government member, we are threatened,&#8221; he said through a translator. &#8220;It affects the morale of the council.&#8221;

Again, Mixon said, Iraqis must look to themselves for the solution. He told the council of a videotaped execution he saw. In the footage young &#8220;punks,&#8221; the general said, drove a car in circles in the middle of a Baqouba street brandishing AK-47s before pulling out two young men from the trunk. &#8220;They shot them in the head,&#8221; he said, &#8220;and people in the street congratulated them for being mujahadeen. We need people to support security forces.&#8221;

At one point in the meeting, the general waved away one of his staff, telling him to cancel an afternoon appointment.