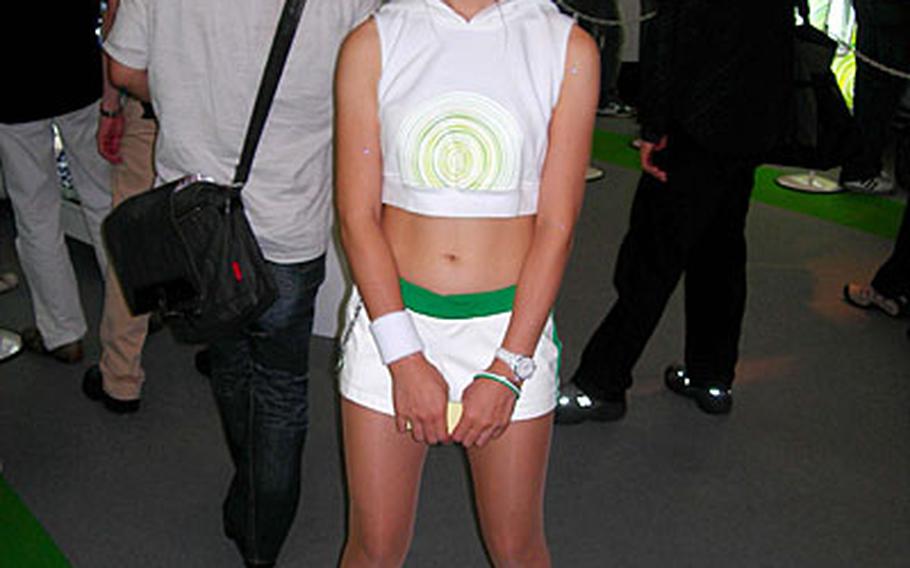 One of Microsoft’s “booth babes” helps patrons with questions about games for the 2007 Tokyo Game Show. (Christopher B. Stoltz / S&S)

One of Microsoft’s “booth babes” helps patrons with questions about games for the 2007 Tokyo Game Show. (Christopher B. Stoltz / S&S) 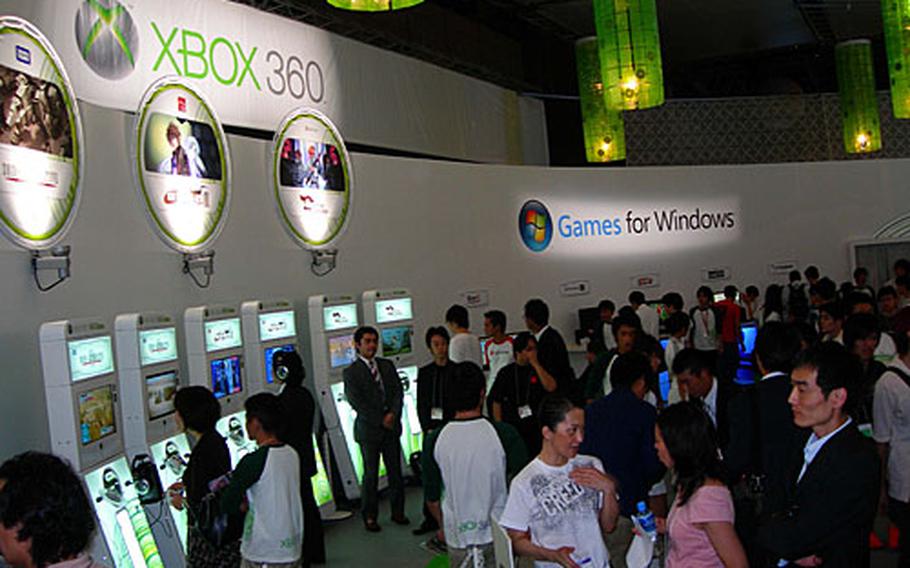 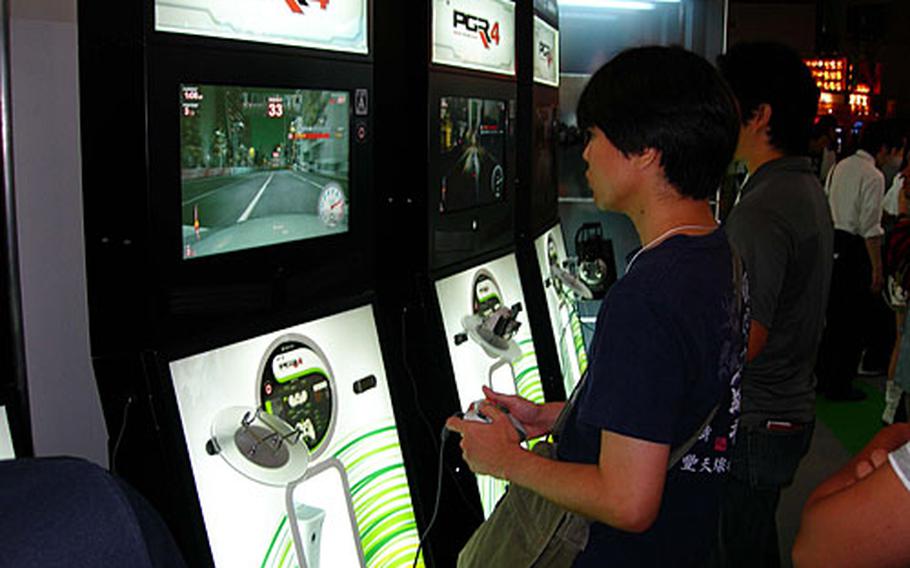 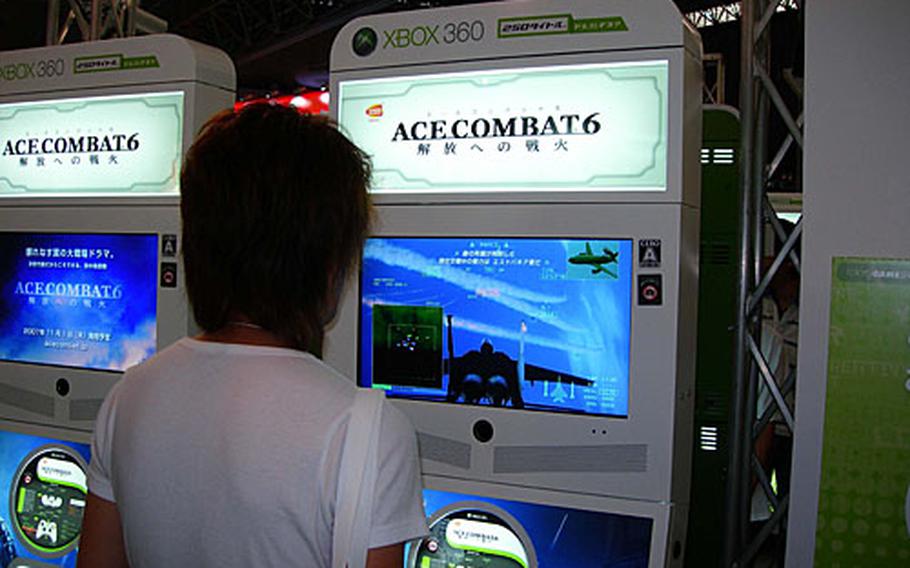 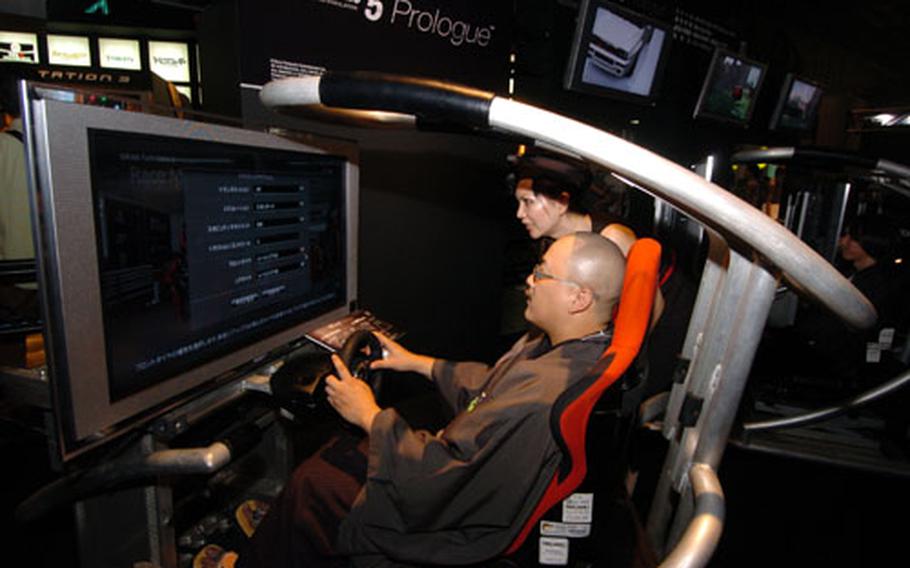 TOKYO &#8212; Tired of gamers shaking their fists at Sony for not including a vibration feature in the motion-sensing Sixaxis controller for the PlayStation 3, the company shook back Thursday by introducing the Dualshock 3 controller during the opening day of the 2007 Tokyo Game Show.

&#8220;The users requested that we resurrect the vibration function,&#8221; said Kaz Hirai, Sony&#8217;s president and group CEO, during his keynote speech at the gaming convention.

Hirai made no mention of how much the new controller would cost. The current version of the PlayStation 3 controller retails for $49.95 from Sony&#8217;s online store.

Another major announcement from the Sony boss was that the company&#8217;s highly anticipated interactive virtual world, &#8220;Home,&#8221; originally scheduled for release this year, will be delayed until Spring 2008 to make further improvements.

Hirai also focused on increased functionality for the PlayStation Portable, including the ability to use the PSP as a controller for the PlayStation 3. He showed a picture of a user playing a car-racing game in which the PSP screen served as the rear-view mirror.

One rumored announcement, which did not occur, was a drop in the price of the PlayStation 3 system.

Hirai said said that instead of lowering the price, Sony is focused on improving its software titles to draw more users to the system.

While Sony had no truly groundbreaking announcements during the speech, the addition of rumble to the Playstation 3 controller and the impending release of several big name titles is good news for the gaming company, which has struggled recently in sales of its next-generation console.

Hirai was noticeably more subdued than in past speeches, possibly because of PlayStation 3&#8217;s low sales numbers since its launch in November, and he re-affirmed the company&#8217;s commitment to gamers.

The Gran Turismo series has always distanced itself from other racing games by focusing on realism and precision driving over burnt rubber and realistic crash effects. At this year&#8217;s Tokyo Game Show, one developer for the latest version of Gran Turismo said it was more a &#8220;driving simulator&#8221; than a racing game.

Gran Turismo 5 Prologue continues this tradition with beautifully rendered car models, gorgeous scenery and the ruthlessly realistic controls that can leave a reckless driver spun out in the dirt.

Zipping around the corners of the Fuji Racetrack, it&#8217;s easy to get distracted by mountains in the background and crowd cheers as you race by the stands.

With online play for up to 16 drivers, the game features improved artificial intelligence and will be sold online and on Blu-Ray disc.

The game will be released in Japan on Dec. 13, with North American and European launches following in 2008.

Similar in play style to &#8220;God of War,&#8221; the demo had Conan battling through a dark temple, fighting spectral suits of armor and animated statues. Dispatching enemies with various fast and slow attack combinations, the confident Cimmerian warrior adds insult to injury by taunting them as they fall.

Conan can pick up the weapons dropped by his foes and wield them in a variety of combinations. Twin axes, a sword and shield and massive two-handed sword were among a few of the weapons available to Conan. And if you get tired of using one, he&#8217;ll gladly lob it at the nearest enemy at the push of a button.

Solid Snake is back in Konami&#8217;s eagerly anticipated sequel in the popular &#8220;Tactical Espionage Action&#8221; series. Thursday visitors at this year&#8217;s Tokyo Game Show finally got their hands on the game, which until now had been shown only in trailer form.

The level demonstrated was the same war-torn Middle East locale of past games.

Wandering through the dusty street, ducking onto side streets, bombed-out buildings and even dumpsters, Snake must sneak and fight his way past well-armed mercenaries patrolling the area.

The game plays similar to previous Metal Gear Solid titles, with some noticeable improvements. Noncombat action such as climbing, and jumping and hugging walls, are done by pressing the triangle button.

Combat also has improved, giving the option of toggling between an auto-aim, run-and-gun style of shooting by holding the L1 button or a more-precise style allowing for accurate headshots.

Metal Gear Solid veterans should feel right at home, while new players will appreciate the smoother learning curve as they take Snake out for what is most likely his last mission.