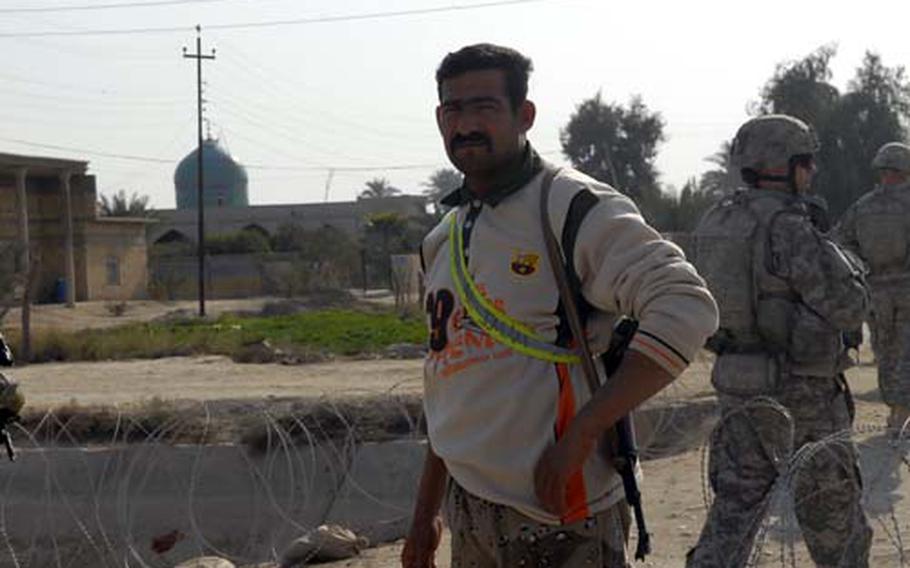 A “Sons of Iraq” guard mans a checkpoint in Diyala Province. The guards often lack uniforms and training but their manning of checkpoints and, more importantly, their abandonment of the insurgency is widely credited with reducing violence across Iraq. (Heath Druzin / S&S)

A “Sons of Iraq” guard mans a checkpoint in Diyala Province. The guards often lack uniforms and training but their manning of checkpoints and, more importantly, their abandonment of the insurgency is widely credited with reducing violence across Iraq. (Heath Druzin / S&S) 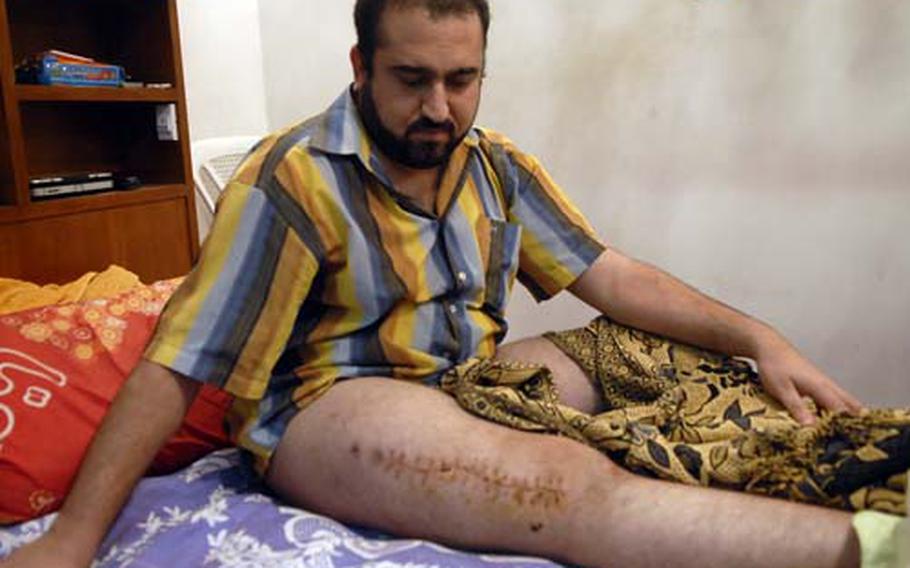 "Sons of Iraq" leader Firas Kadir, was injured by a bomb blast in front of his house in February. He thinks insurgents were behind the attack but, like many "Sons of Iraq" leaders, he is almost equally concerned about the Iraqi government coming after him. (Heath Druzin / S&S) 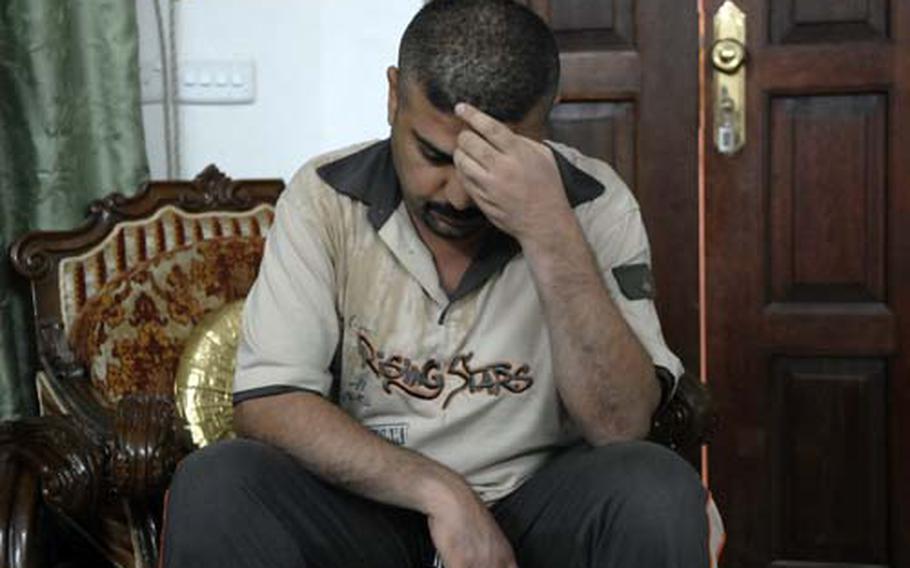 Muthana Ahmed Saleh, a Sons of Iraq leader whose brother was assassinated in March, says poor treatment of "Sons of Iraq" guards could lead to fighting between the guards and Iraqi government. (Heath Druzin / S&S)

BAGHDAD &#8212; For 10 weeks, Firas Kadir has been confined to his bed, the jigsaw pieces of his leg held together by pins and staples, reconstructed like the wall outside his home that was obliterated by a Feb. 21 bomb blast.

The "Sons of Iraq" leader blames insurgents for the attack but, like many leaders of a program widely credited with improving security in the country, he is nearly as wary of the Iraqi government now charged with supporting Kadir and the 120 men who answer to him. He says pay problems have already driven nearly 40 guards from his unit.

"If the government treats the &#8216;Sons of Iraq&#8217; badly, the [guards] will quit. And you know the Iraqi army and Iraqi police are not ready to control everything," Kadir said.

Kadir&#8217;s concerns reflect those of American troops, who worry that unhappy "Sons of Iraq" members could deal a blow to security improvements in the country.

The groups, known also as the Awakening, are part of a U.S.-created program to arm and pay Sunni militias, whose ranks include many former militants. They mainly run checkpoints. As of April 1, control of the groups was transferred completely to the Iraqi government.

Tensions have been rising recently with several high-profile arrests and killings of "Sons of Iraq" fighters, the latest on Tuesday when Iraqi soldiers killed a guard and arrested his brother in the town of Abu Ghraib, according to wire reports. A gunfight in late March between U.S. and Iraqi troops and fighters loyal to an arrested leader offered a glimpse into the worst-case scenario if the program goes awry.

Pay problems are the biggest complaint of "Sons of Iraq" leaders. Leaders interviewed for this article said pay is sometimes late, many guards&#8217; names are erroneously missing from government rolls, meaning they are not paid at all, and that on pay day guards are often made to sit and wait in the broiling sun for hours &#8212; all claims backed up by U.S. troops. The Iraqi government has promised to hire "Sons of Iraq" guards either into the security forces or to government jobs, but this process has moved slowly, in part due to recent budget cuts by the Iraqi government.

Underlying all of this is a perceived lack of respect from the central government.

It&#8217;s also a sensitive subject with the U.S. military these days &#8212; an embed request with a unit in Baghdad was denied, a decision a military spokesman acknowledged was due to critical press coverage of the program&#8217;s handling.

The specter of guards abandoning their posts en masse is what worries U.S. troops the most. It would not only leave checkpoints unguarded, leaving streets more vulnerable to bomb attacks, but it would also potentially put thousands of disgruntled armed men on the street without jobs. In Baghdad, the epicenter of the program with nearly 50,000 guards, that scenario is already playing out on a small scale.

"I think the Iraqi government is not capitalizing on the momentum," said U.S. Army Capt. Jason Dudley, who works closely with "Sons of Iraq" leaders in northeast Baghdad. "I think it&#8217;s a huge blow to the momentum we&#8217;ve created."

Muthana Ahmed Saleh has paid a heavy price for his participation in the Sons of Iraq. On March 14, his brother, Jamal, was killed when his car was blown up. A Sunni leader who oversees 220 guards, Saleh says he is in constant fear the government will arrest him.

"Al-Qaida fights us, the government fights us and the militias fight us," he said. "The only people who support us are the Americans."

Saleh says pay problems have driven around three dozen men from his unit, and that his men feel stung by a lack of respect from the government. If things degenerate further, he said, there could be more fighting.

Even as they give uneven reviews to the Iraqi army and National Police, U.S. commanders and troops on the ground universally praise the "Sons of Iraq" program. Most give a less dire assessment of the current tensions than do "Sons of Iraq" leaders, but all agree the stakes are high.

"It&#8217;s about reconciliation," said U.S. Army Col. Jeffrey Kulmayer, chief of reconciliation for coalition forces. "The &#8216;Sons of Iraq&#8217; were key to the increased security in this country. And the security gains, as General (Ray) Odierno has stated, are reversible."

Underlying much of the friction are religious tension between the mostly Sunni "Sons of Iraq" members and the Shiite-dominated government &#8212; friction underscored by recent violence that has many Iraqis worried about a return to sectarian fighting.

"I must be Iranian, like (Iranian President Mahmoud) Amedinejad, to make the government like me," Saleh said, referencing Baghdad&#8217;s relationship with its Shiite neighbor.

But, while the "Sons of Iraq" is a mostly Sunni program, there are Shiite units and mistrust of the Shiite-dominated government crosses religious boundaries.

"All the politicians who are working with Iran are controlled by Iran, who tells them to create problems with the &#8216;Sons of Iraq,&#8217;&#8197;" said Sheik Ali Mijbil al-Ghrayn, a Shiite "Sons of Iraq" leader in the Baghdad neighborhood of Kuwaiti Village.