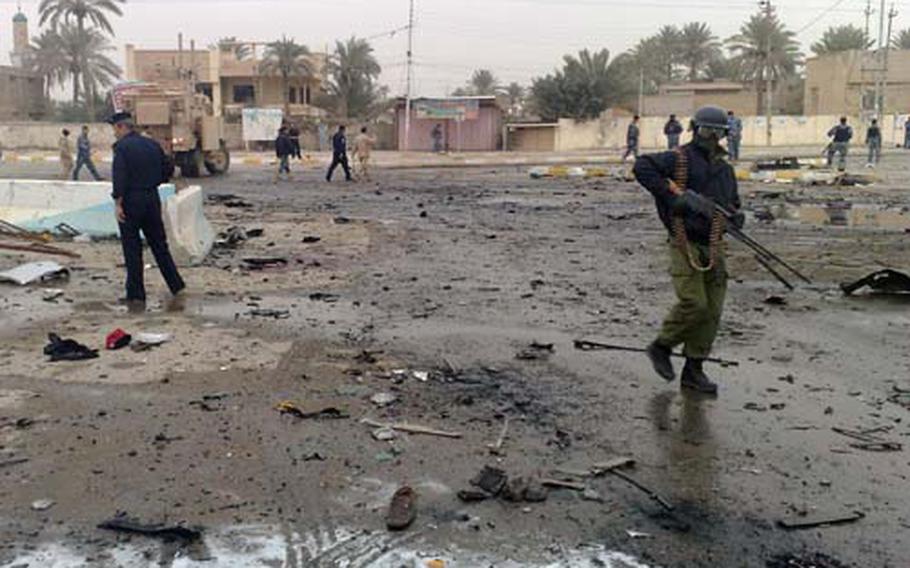 Iraqi security forces walk the site of a bombing in Ramadi on Wednesday. A pair of suicide bombers killed 24 people in Ramadi and badly injured the governor of Anbar province, where the alliance between Sunni tribes and the U.S. military first took hold. (AP)

BAGHDAD &#8212; The killing of several members of the U.S.-allied Sunni militias known as &#8220;Sons of Iraq&#8221; has underscored the increasing weakness of groups widely credited with helping turn the tide of the Iraq war.

About a dozen members of the groups have been killed in the rural areas south of Baghdad in recent weeks, U.S. military officials say. Similar attacks have occurred elsewhere, including the execution-style killing of five SOI members north of Baghdad on Tuesday.

The attacks come amid growing signs that the Sunni insurgency is seeking to reassert itself ahead of March elections. On Wednesday, a pair of suicide bombers killed 24 people in Ramadi and badly injured the governor of Anbar province, where the alliance between Sunni tribes and the U.S. military first took hold.

In some cases, U.S. officials south of Baghdad say, the killings amount to a settling of scores dating from the U.S. troop &#8220;surge&#8221; in 2007 and 2008, when most Sunni tribes in the area turned against insurgent groups such as al-Qaida and allied with the United States.

&#8220;We&#8217;re seeing the combination of us thinning out, the government of Iraq offering them no jobs or bad jobs, and the release of some former (al-Qaida) elements from detention,&#8221; said one U.S. staff officer, who asked not to be identified so he could freely discuss intelligence. &#8220;It&#8217;s leading to a perception that the SOI are increasingly vulnerable and lack support, and that&#8217;s leading to a lot of retribution.&#8221;

The militias grew out of an alliance between the U.S. military and Sunni tribes that turned against the insurgency beginning in Anbar province in 2006. Initially paid by the U.S., the groups numbered more than 100,000 by 2008. The Shiite-dominated central government, however, has always been suspicious of the groups and has sought to reduce their numbers since taking control of the program last year.

The farmland south of Baghdad, a key battleground during the surge, maintains one of the highest concentrations of SOIs in the country, with about 13,000 militiamen still on the rolls. In contrast, only about 4,000 SOI remain active in all of Anbar Province.

U.S. officials say attacks against SOI are averaging about 10 a week and have increased significantly since November.

In recent days, according to the military, an SOI member was found murdered in Yusufiyah, about 20 miles southwest of Baghdad; another lost his legs after his car was rigged with explosives; an SOI leader fought off a kidnapping attempt in the southern Baghdad neighborhood of Dora; and a bomb exploded outside the house of another SOI leader.

&#8220;We&#8217;re not talking about some big spike in violence, but as the elections approach there&#8217;s definitely an effort to coerce these guys back into the insurgency or just get them to quit,&#8221; said Lt. Col. Wayne Ayers, an officer with the 30th Heavy Brigade Combat Team, headquartered at Forward Operating Base Falcon just south of Baghdad.

Indeed, as the U.S. pulls back ahead of major troop reductions planned for this year, the SOI have been increasingly left to fend for themselves. The Iraqi government took over payment of the SOI last year and has sought to transition the militiamen into other government jobs. Initial plans to disband the groups entirely by the end of 2009 were pushed back amid security concerns connected to the elections.

Roughly one-third of the 23,000 Sons of Iraq in the largely rural areas south of Baghdad have been moved into other jobs or have returned to farming, American officials say. But the Iraqi jobs program has hit significant snags, partly because budget woes have limited the Iraqi government&#8217;s ability to absorb new employees and partly because many of the SOI are illiterate and lack basic job skills.

Many of the jobs on offer involve what are seen as demeaning tasks, such as picking up trash or working as janitors. In some cases, officials say, SOI members are being offered jobs far from their tribal homeland.

SOI leaders, meanwhile, said their dwindling numbers were forcing them to close down some checkpoints and further endanger security.