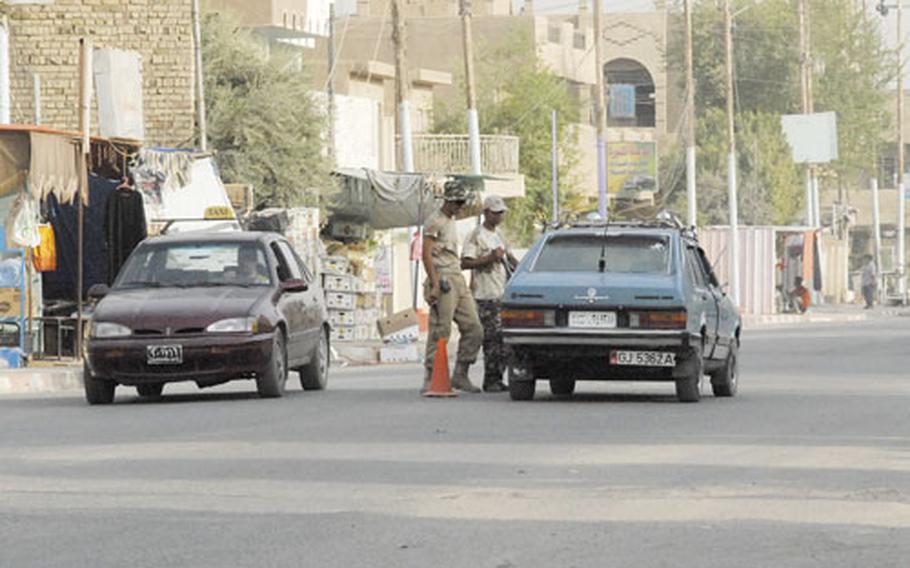 Members of the “Sons of Iraq” stop a vehicle for a search at a makeshift checkpoint in the Doura neighborhood of Baghdad’s eastern Rashid District. (Leo Shane III/S&S)

BAGHDAD &#8212; Above the desk of Nadder Ali Muhammad Al-Jabouri hangs an old but still imposing Iranian rifle, used in fighting years ago. On the desk of the head of the As&#8217;ia neighborhood&#8217;s "Sons of Iraq" chapter sits plans for renovating the community&#8217;s Christian church, contracts for building a new civic center, and new vehicle registration stickers for his men to hand out.

The projects and paperwork are part of U.S. efforts in Baghdad&#8217;s Rashid District to shift the "Sons of Iraq" from a paramilitary force to other community functions. While U.S. officials acknowledge the largely Sunni force has been critical in stabilizing many sections of the city, they also note that eventually the groups will have to integrate into the national government or disappear for the neighborhoods to return to normal.

And with a push by the Shiite-led central government to disband the groups, the U.S. effort is gaining more urgency.

Capt. Todd Poindexter, head of 7th Squadron, 10th Cavalry&#8217;s Troop A, said the SOI traffic checkpoints throughout this neighborhood have already begun linking their efforts with official Iraqi security forces checkpoints, with the long-term goal of phasing out the makeshift stands.

Meanwhile, U.S. forces are offering $5,000 grants to groups of three or more SOI members who want to start a new business. That&#8217;s double the amount given for regular small business grants. And U.S. officials encourage nearly all acting members of the group to apply for national police jobs, despite Iraqi government reluctance to hire them.

More than that, the government has arrested group leaders and issued arrest warrants that have caused others to go into hiding. Senior Iraqi officials have said that they believe many of the group members are responsible for serious crimes, and that they should not be given an "immunity" of sorts because they are participating in the "Sons of Iraq" program.

The groups are also increasingly targeted by insurgents, who have killed nearly 500 Sons of Iraq this year.

Local U.S. commanders acknowledge it&#8217;s a slow process to shift the group members, in part because the U.S.-paid "Sons of Iraq" are still providing important security leads to coalition forces in many areas of the city.

"These guys probably had ties to insurgents in the area," said Col. Tim Watson, head of the 2nd Brigade, 4th Infantry Division. "But it has been a very complex fight. Both the SOI and Iraqi security forces view themselves as protectors of the population.

"I think the Iraqi government will eventually take full control of them. But for now, they have a job, they&#8217;re helping our forces, and they want to secure the neighborhoods."

Poindexter said he&#8217;s reluctant to lose any tips about insurgents and weapons caches in his areas, whether they come from the SOI, Iraqi security forces or locals willing to talk to either group. But his semi-weekly meetings with Al-Jabouri only focus on those issues for a few minutes, and spend more time on community projects in which "Sons of Iraq" members can help rally the larger community into meetings and improvement projects.

Poindexter and other U.S. officials in the area are quick to point out that Al-Jabouri is one of the more professional and trustworthy "Sons of Iraq"S leaders, someone who will likely make the transition to official government work easily.

Other members, like a recently arrested SOI fighter who went on a drunken rampage and had significant ties to illegal activity in the area, likely won&#8217;t make that switch.

But in the meantime, Al-Jabouri said his men will be out handing out car registration stickers all next week, trying to fill whatever role the U.S. asks them to help keep their neighborhoods safe.