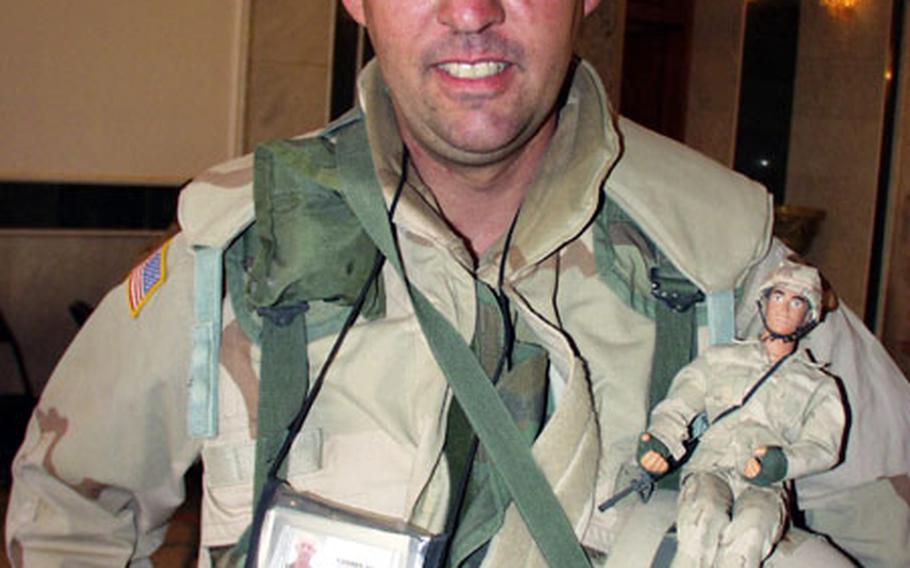 BAGHDAD, Iraq &#8212; Joe packs a pistol and has an M-16 rifle slung over his shoulder. His crisply pressed desert camouflage uniform still looks sharp, though a bit dusty from a run that started in the sands of Kuwait.

On this day, he&#8217;s at a presidential palace on the outskirts of Baghdad, where Air Force Gen. Richard D. Myers is visiting with servicemembers. Joe got lucky: His bunkmate snapped a photo of him seemingly standing next to the chairman of the Joint Chiefs of Staff.

Pearson took possession of G.I. Joe from his son on a cold night in mid-February. The next day, the communication unit he commands &#8212; with one very special addition &#8212; left Bamberg, Germany, for the Middle East and a date with Saddam Hussein.

And Pearson has grown attached to the icon of American machismo, too, keeping it and a picture of his wife next to his slumbering body. G.I. Joe, of course, sets his rifle aside during the lull in action.

For Pearson and members of his unit, the 7th Corps Support Group, the real action got rolling at Camp Virginia in Kuwait. When the unit headed north as part of the invasion force, he hit upon the idea to snap pictures of Joe in different locations and situations.

The Myers visit was just the latest.

As the chairman mingled with soldiers, there was Pearson in a corner of the ornate room, his left arm outstretched with Joe in hand as he shot pictures with the other.

&#8220;I started to superimpose him on everything we came across &#8212; tanks, anti-aircraft artillery pieces, unexploded ordnance,&#8221; Pearson said as he reviewed his latest photo coming to life on the display screen of his digital camera.

Muncy recalled a few instances when he and Pearson pulled over to the side of the road to add to Timothy&#8217;s portfolio.

Doll or dapper dude, the experience has provided Pearson with a wonderful way to stay connected to his family back home.