Son catches up with father in Kuwait 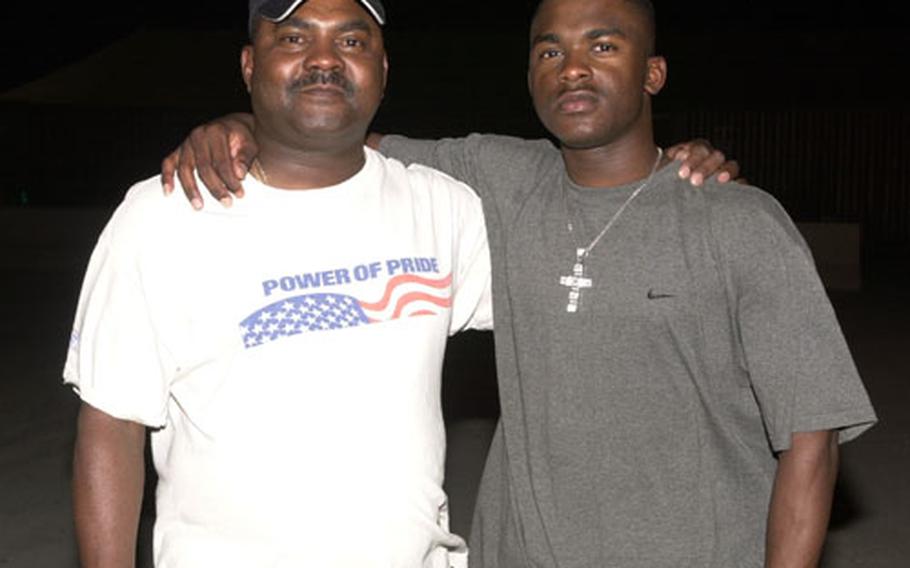 Spcs. Willie J. Butler Sr., left, and Willie J. Butler Jr. spent quality father/son time together on Camp Arifjan, Kuwait, as the elder Butler&#39;s unit passed through the base on its way back to the States. ()

CAMP ARIFJAN, Kuwait &#8212; Many fathers are proud to have their children follow in their footsteps. For one father here, his son not only followed, he also caught up.

The father-son duo of Willie J. Butler Sr. and Jr. not only share the same name, but also the same rank. Both are specialists &#8212; the father in the Army National Guard, the son in the Army Reserve.

And they were able to spend a month together at Camp Arifjan before the father flew back to the States at the end of last month.

Butler Sr. joined the Army in 1979 and served until 1987. He said he returned to the service in 2002 to make a little extra money and work toward his retirement.

His unit, the 878th Engineer Battalion based in Augusta, Ga., had been serving in Iraq since June 2003 and came to Camp Arifjan in mid-May before heading home.

The younger Butler has been in for nearly three years. He is stationed in Kuwait with the 450th Ordnance Company out of Fort Stewart, Ga., until at least the end of this year, he said.

The elder Butler said he heard his son was stationed at Camp Arifjan in March. He found out in April that his unit was heading here, and wrote his son to tell him they would soon see each other. After arriving, Butler Sr. said it was being in the right place at the right time that helped him find his son.

After the reunion, the two saw each other daily. They either sat down to eat breakfast or dinner together or took time in the evening to hang out and chat. Even though he worked all day on June 20, Butler Jr. made sure to find his dad that evening to wish him a happy Father&#8217;s Day.

Because of a slower rate of promotion in the National Guard, Butler Jr. said he would soon pass his dad and become a sergeant.

Even though Butler Sr. has returned home, he will still be able to spend time with his son. Butler Jr. is to fly to the States this month for 15 days of rest and recuperation.

And when the two part and Butler Jr. returns to Kuwait, the father said he can&#8217;t help being concerned about his son&#8217;s safety.