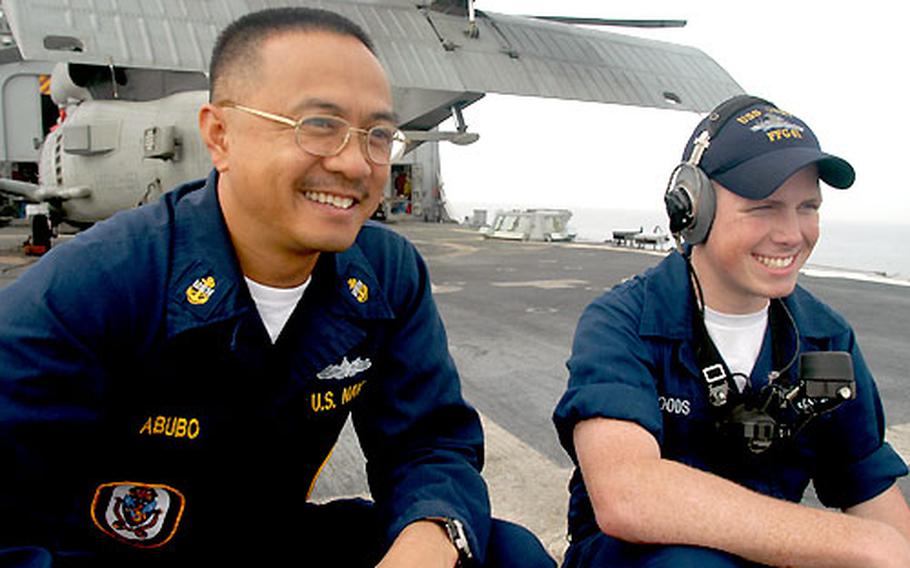 Sailors on the USS Gary say they enjoy the camaraderie of a small crew; there are no strangers on a ship of 250 sailors. Chief Petty Officer Jeff Abubo, 40, a master-at-arms from Baguio, Philippines, chats with Seaman Kent Woods, 21, standing lookout on the fantail near a helicopter. (Kendra Helmer / S&S)

Sailors on the USS Gary say they enjoy the camaraderie of a small crew; there are no strangers on a ship of 250 sailors. Chief Petty Officer Jeff Abubo, 40, a master-at-arms from Baguio, Philippines, chats with Seaman Kent Woods, 21, standing lookout on the fantail near a helicopter. (Kendra Helmer / S&S) 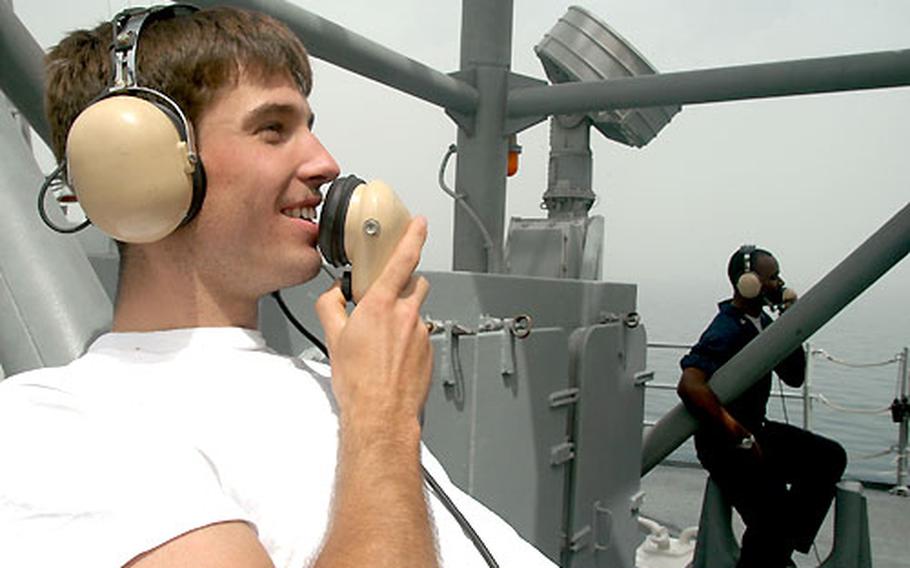 Petty Office 2nd Class Justin Salus, left, 21, a sonar technician from Colorado Springs, Colo., stands watch with Petty Officer 3rd Class Shawn Byrd, 25, a gunner&#39;s mate from Louisville, Ky. The two were chatting with other sailors on watch via sound-powered phones on the USS Gary. While Salus said he&#39;d prefer to be on an aircraft carrier, Byrd likes the camaraderie of a small ship. (Kendra Helmer / S&S) 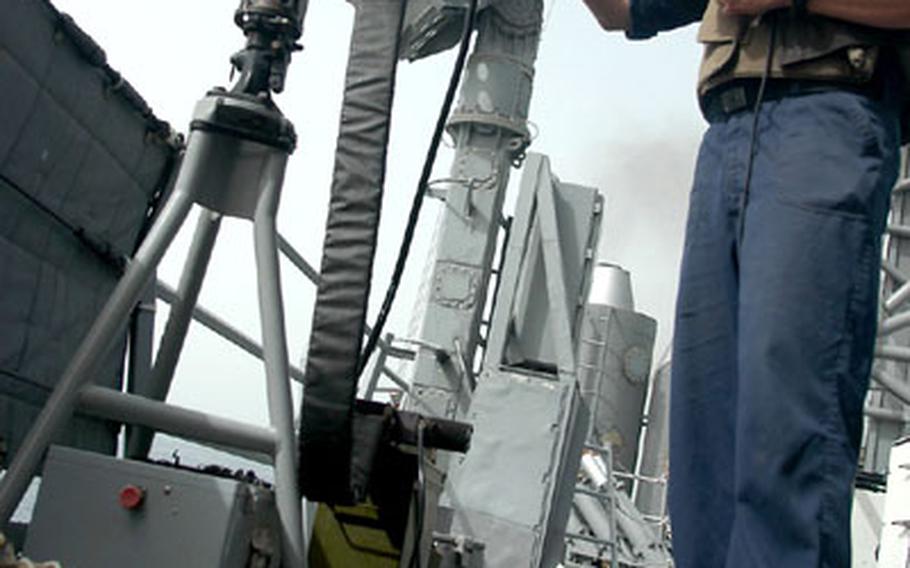 Seaman Corey Allen Smith, 20, from Wichita, Kansas, looks out at the Persian Gulf after shooting an MK 44, its 7.62 mm shells scattered at his feet. He likes living on a small ship because he gets training in a variety of areas, like shooting, that he wouldn&#39;t on an aircraft carrier. (Kendra Helmer / S&S)

ABOARD THE USS GARY &#8212; Fireman Jesse Merrill, his knee swollen to the size of a grapefruit, left the USS Gary for medical treatment on a nearby aircraft carrier.

Some may think he would have relished a break from his 453-foot-long frigate. The USS Kitty Hawk, a floating city of 5,500 people, has 22 times the number of sailors as the frigate.

And don&#8217;t discount the perks. It would be a bit difficult to cast a fishing line off a carrier. Before arriving in the Persian Gulf, while waiting for ships to escort, sailors fished off the Gary&#8217;s fantail.

One day, sailors had 15 mahi mahi to cook at a picnic on their steel beach.

It is also Siesta Wednesday. There are no meetings from 11 a.m. to 2 p.m. and no work except for jobs necessary to keep the ship going.

Most sailors stand watch and have more than one job. That can be tiring, but it has an advantage.

&#8220;You get a chance to know everybody and work with them,&#8221; said Seaman Corey Allen Smith, a personnel man from Wichita, Kan.

On small boys &#8212; the term for ships other than the giant carriers &#8212; sailors can learn all the systems during a long deployment. The Gary left port in late January.

Dua, 41, from McLean, Va., said he knows the importance of looking out for his sailors. He sends a weekly e-mail to about 100 sailors&#8217; relatives, updating them on how the crew is doing.

&#8220;I ask you all to keep writing e-mails and sending your packages and letters. Your sailor really beams with pride when he gets a letter/box from home,&#8221; he wrote in recent message.

Some Gary sailors say they would prefer to be on a carrier, where mail comes more frequently. Those who say they prefer smaller ships likely haven&#8217;t been on a carrier, said Petty Officer 2nd Class Chinua Raine, 31. The aviation ordnanceman from Birmingham, Ala., misses the excitement on the flight deck of the two carriers on which he served.

Plus, he said, it is more like real life, with both men and women serving together. The Gary has an all-male crew.

But the Gary just got some new equipment. And the topside gym is pretty sweet with a sea breeze blowing across sailors as they pump iron.

Overall, it&#8217;s much more peaceful on a frigate. Bunks don&#8217;t shake because of aircraft launching and landing. The frigate&#8217;s gentle rolling lulls sailors to sleep &#8212; though, in rougher seas, the result is not so gentle.

On a recent night, Seaman Joshua Laskowski was on watch on the fantail, his legs dangling over the wall to the poop deck. The nearby water occasionally glowed with passing jelly fish. During the day, sailors often spot dolphins.

That&#8217;s part of what Merrill missed during his five days on the Kitty Hawk for treatment for the knee he injured falling off a diesel engine. Under doctor&#8217;s orders, the engineman exercised by hobbling around the carrier. He didn&#8217;t like what he saw.

He understands, however, why a ship with 5,500 sailors needs more structure.