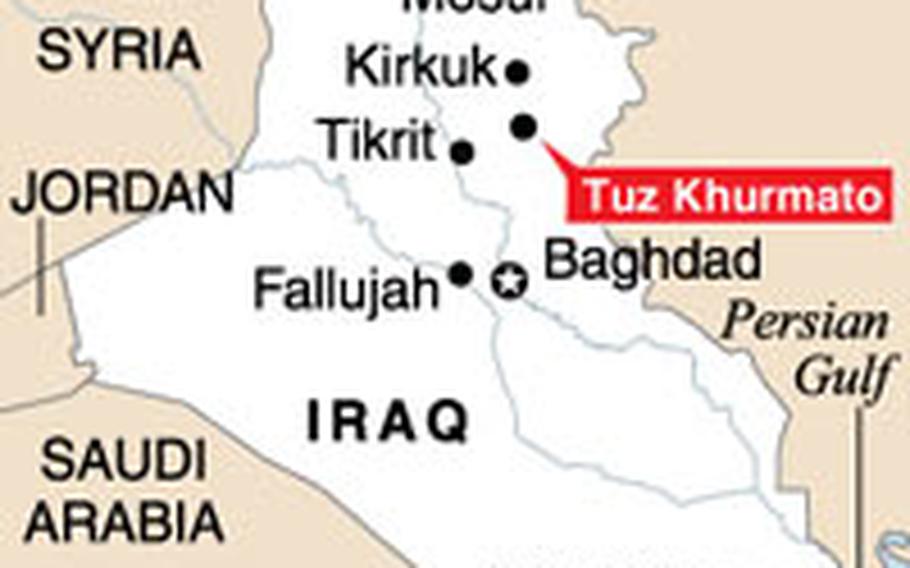 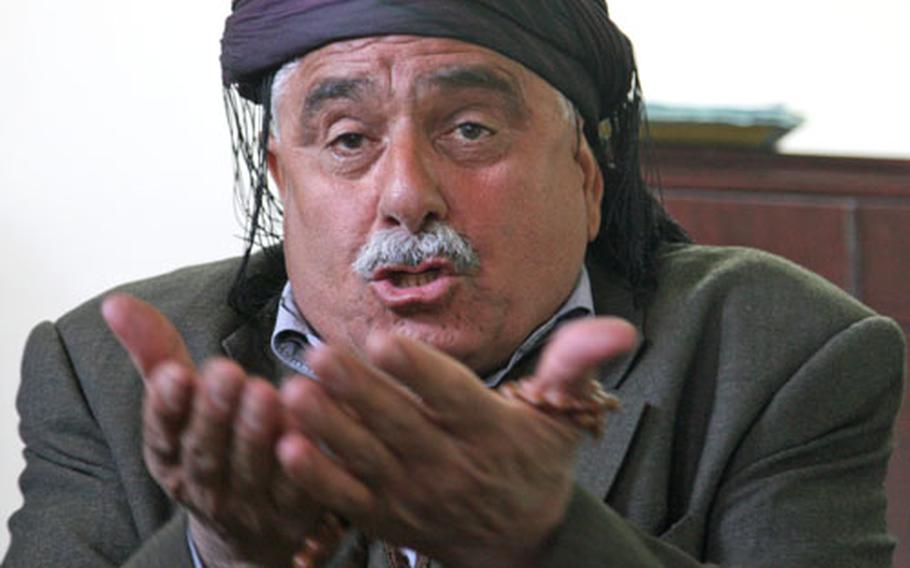 An Iraqi Turkoman sheik speaks out passionately against forming a concerned local citizens group in the city of Tuz in northern Iraq. Many oppose the move, saying it would provoke ethnic and religious strife in the heavily mixed region. (Drew Brown / S&S) 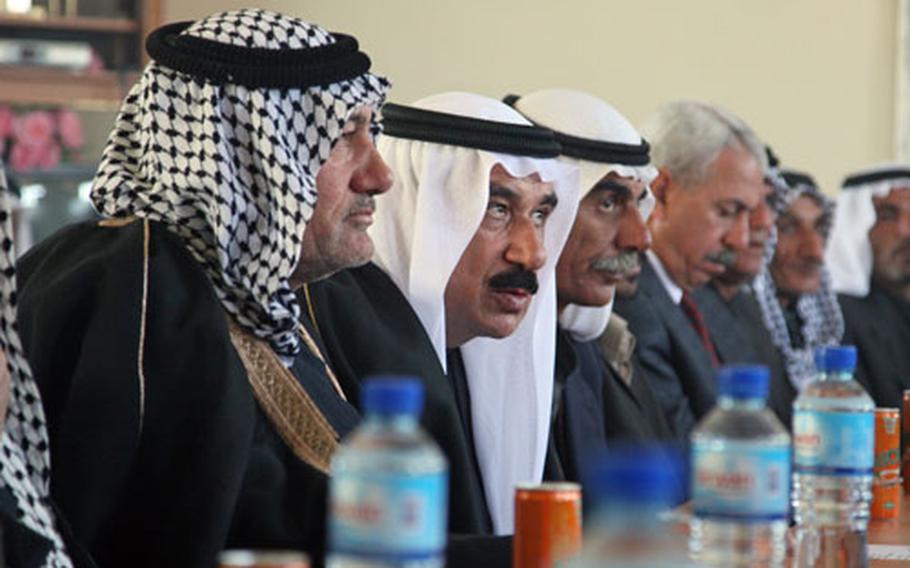 Sheiks in the northern Iraqi city of Tuz listen as their colleagues voice concern about forming a concerned local citizens group in their area. (Drew Brown / S&S) 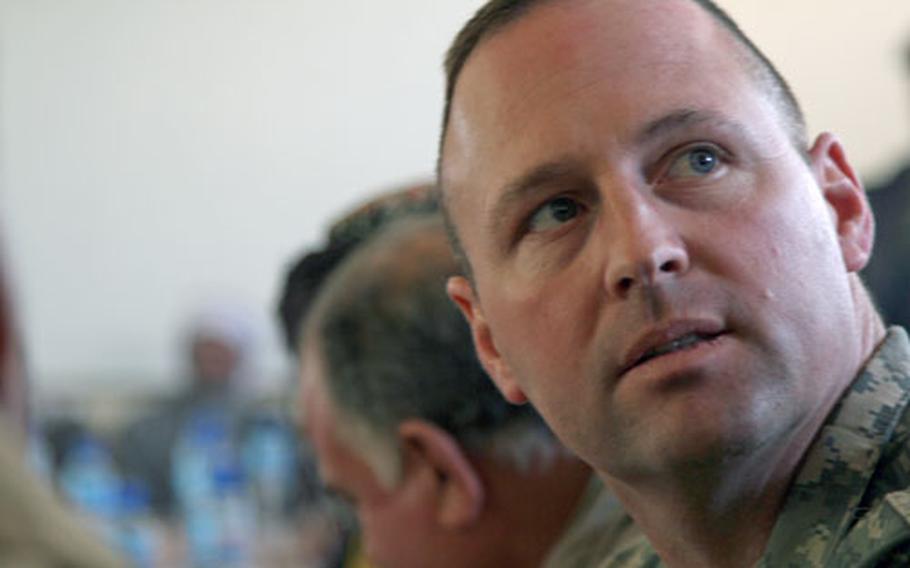 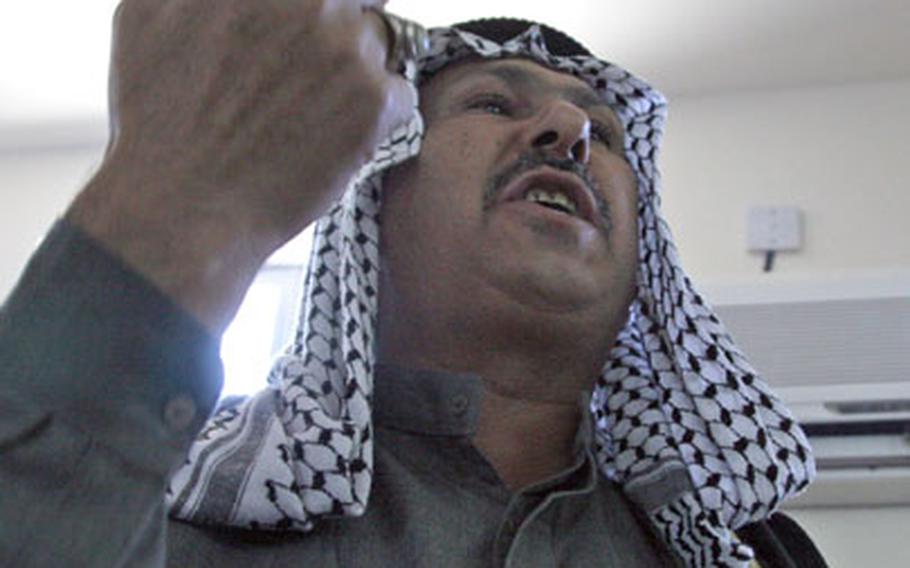 A Sunni Arab sheik speaks in favor of forming a concerned local citizens group in the city of Tuz in northern Iraq. (Drew Brown / S&S)

TUZ KHURMATO, Iraq &#8212; Tribal militia groups operating under U.S. authority have helped improve security in many areas of Iraq and are one of the primary reasons why insurgent attacks have plummeted in recent months.

But in this city of mixed ethnicities and religions in northern Iraq, many tribal leaders are saying no to the formation of U.S.-backed &#8220;concerned local citizens&#8221; groups in their area.

In a meeting Tuesday with Lt. Col. Darren Ricketts, commander of the 10th Mountain Division&#8217;s 1st Squadron, 71st Cavalry Regiment, the majority of the 80 or so district and tribal officials said forming the groups would provoke ethnic and religious strife in Tuz, which is composed of 40 percent Kurds, 40 percent Turkomen and 20 percent Arabs.

&#8220;There are three different ethnicities and two religions in our area,&#8221; said one sheik. &#8220;Increasing the Iraqi army is the answer. The CLCs will provide security only for the members of their tribe.&#8221;

The formation of the concerned local citizens groups, as the U.S. military calls the militias, has occurred primarily among Sunni Muslim Arabs. As Sunnis across Iraq have revolted against al-Qaida, U.S. commanders have responded by placing tens of thousands, many of them former insurgents, on the payroll under security contracts negotiated with local tribal leaders.

The program of essentially buying off of potential insurgents proved so successful in reducing attacks in many areas that U.S. commanders have expanded it to include security contracts with Shiite Muslim Arabs around Baghdad and tribal leaders from other sects elsewhere in the country.

The plan is to integrate many of those in the tribal militias into the Iraqi army and police, or to provide them with job training or business loans. U.S. commanders say the program provides short-term legitimate employment to those who might otherwise turn to al-Qaida or other militant groups as a source of income.

However, the insurgency in Tuz has remained relatively weak and the region has been spared much of the ethnic and sectarian strife that has engulfed other areas of Iraq for the past two years. City officials, nearly all of whom are Kurds installed by Kurdish political parties after the 2003 U.S. invasion, said they were opposed to any move that might upset the city&#8217;s relative calm.

&#8220;We are refusing to give any weapons to any tribes,&#8221; said Adil Gili, the Tuz security committee director.

U.S. commanders say that members of the groups must furnish their own weapons and ammunition. Iraqi law allows each household to possess one AK-47 automatic rifle and one 30-round magazine of ammunition.

The city&#8217;s Kurdish mayor, Mohammad Rashid Mohammad, said he favors whatever the majority of the sheiks wanted.

One Sunni Arab sheik spoke out in favor of forming the groups. But another said that &#8220;the mistakes of the past regime&#8221; must not be repeated, a veiled reference to Saddam Hussein&#8217;s policy of paying off various tribal groups to keep others in line. The city council&#8217;s president, himself a Sunni Arab, said he opposed the groups, but allowed that the issue needed further discussion.

A Turkoman sheik voiced passionate disagreement. &#8220;We cannot create militias,&#8221; he said. &#8220;All weapons need to be under the control of the government. We need to support the Iraqi police and the Iraqi army.&#8221;

In an interview afterwards, Ricketts, the squadron commander, said that the road to Baghdad was the only place in Tuz that really needed a tighter security presence. He said he would prefer to have Iraqi police perform security duties in Tuz. The police are authorized 1,078 positions, he said, but the Iraqi government has not provided enough money to pay that many officers or provide them with uniforms.

However, Ricketts said he would continue to discuss the issue with Tuz leaders and see if a consensus could be reached. &#8220;The bottom line is that if I think we need a CLC,&#8221; then he would persuade the city council and sheiks to agree to one, Ricketts said.