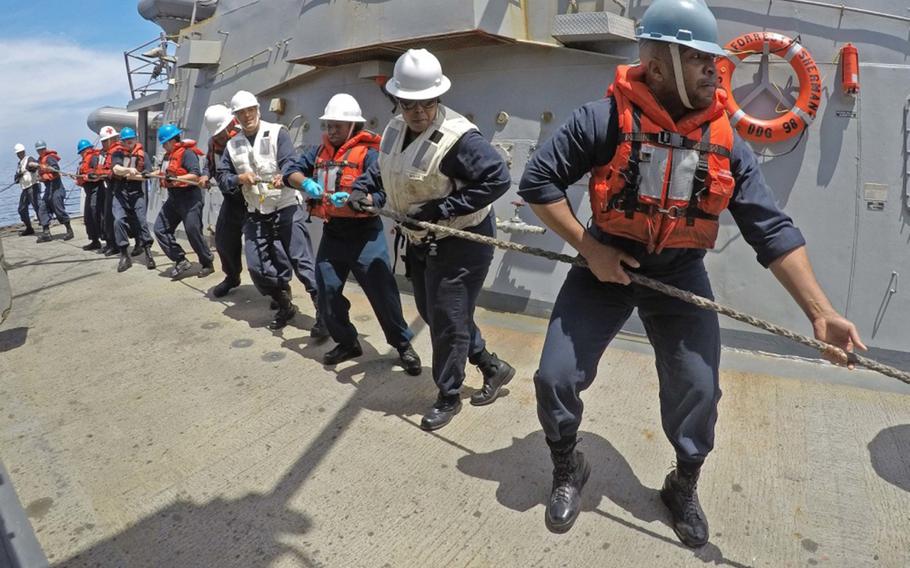 Sailors heave around a line aboard the guided-missile destroyer USS Forrest Sherman on May 16, 2018, during its deployment as part of the Harry S. Truman Carrier Strike Group. (Tyrell Morris/U.S. Navy)

In a surprise revelation Tuesday, the Navy announced some units from the USS Harry S. Truman Carrier Strike Group will return to their homeport in Norfolk, Va., this week after just three months at sea.

The strike group in the past has typically deployed for periods more than twice as long as the three-month endeavor that started in April. The Truman’s most recent deployment in 2016 — scheduled for seven months — was ultimately was extended for an additional month.

The Navy said in a statement Tuesday that the decision for the shorter deployment is a “direct reflection” of the 2018 National Defense Strategy’s dynamic force employment concept.

The strategy calls for the military to “be strategically predictable, but operationally unpredictable,” aiming to shake up what would be expected of its movements to “challenge competitors by maneuvering them into unfavorable positions, frustrating their efforts, precluding their options while expanding our own, and forcing them to confront conflict under adverse conditions.”

Over the past three months, the Truman strike group has battled the Islamic State in Syria and completed training and good-will missions with allies, according to the Navy.

Adm. Christopher Grady, commander of U.S. Fleet Forces Command, said in a statement Tuesday that the early return is not related to any mechanical issues or problems.

“Let me be clear — all returning units are 100 percent mission capable and will remain in the sustainment phase of the Optimized Fleet Response Plan, which means they will sustain warfighting readiness and be ready to surge forward or redeploy when called upon,” he said.

The 2018 Defense Strategy said the dynamic force employment concept would “more flexibly use ready forces to shape proactively the strategic environment while maintaining readiness to respond to contingencies and ensure long-term warfighting readiness.” The idea is to boost readiness for response to major conflicts.

Defense Secretary Jim Mattis in April talked about the idea of shorter deployments during testimony to Congress.

“They’ll be home at the end of a 90-day deployment,” he told lawmakers in April. “They will not have spent eight months at sea, and we are going to have a force more ready to surge and deal with the high-end warfare as a result, without breaking the families, the maintenance cycles — we’ll actually enhance the training time.”

Mattis said during his testimony that the rhythm would be in accord with the movements of ships from across theaters.

“When we send them out, it may be for a shorter deployment,” he said in April. “There will be three carriers in the South China Sea today, and then, two weeks from now, there’s only one there, and two of them are in the Indian Ocean.”

An exact date for the ship returns was not immediately available.

Grady said the ships, aircraft and other equipment will undergo routine maintenance once they return to port. Sailors will be able to “continue advanced training, maintain warfighting certifications, as well as spend time with their families,” Grady said.