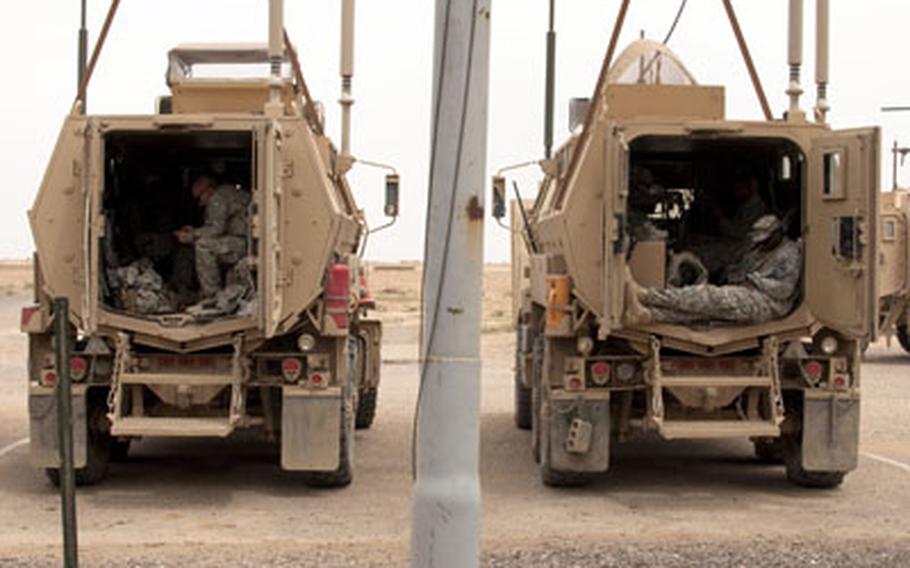 U.S. soldiers relax inside their MRAPs before leaving Forward Operating Base Summerall for good. The sprawling base near Baiji, Iraq, was handed over to the Iraqi government on April 17. () 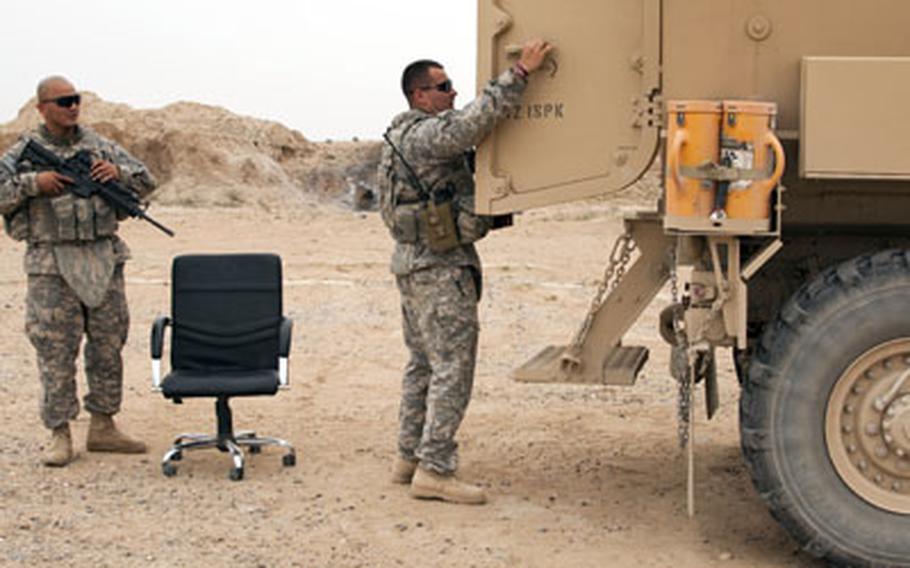 U.S. soldiers prepare to load a favorite desk chair into the back of a Mine Resistant Ambush Protected vehicle before departing Forward Operating Base Summerall near Beiji, Iraq. ()

FORWARD OPERATING BASE SUMMERALL, Iraq &#8212; Memorials for fallen U.S. soldiers used to stand amid the sand and trailers of this sprawling base in northern Iraq like signposts.

Their names were written on concrete blast walls. The gym, the dining hall, the recreation center &#8212; all were named after someone.

But as troops here and at dozens of other bases across the country close down their posts or turn them over to the Iraqi military amid a summerlong thinning of forces, the memorials are one more thing that has to go. Iraqis, by and large, have little interest in paying homage to the sacrifices of American soldiers, and after seven years U.S. troops are working to leave behind as little reminder as possible that they were ever here.

"We&#8217;re trying to sterilize as much as we can," said Army Maj. Mike Volpe, the executive officer for the 2nd Battalion, 16th Infantry Regiment, the last U.S. unit based at Summerall.

The relatively matter-of-fact attitude most troops bring to that task reflects, in some ways, the nature of such a long conflict. Since the war began, at least 53 U.S. servicemembers have been killed in the vicinity of Summerall, which occupies the site of a former Iraqi army helicopter base outside the city of Beiji, 150 miles north of Baghdad.

Most of the soldiers were killed by roadside bombs or gunfire in an area once wracked by insurgency. One was electrocuted in the shower.

But that happened years ago, to other units. The 2nd Battalion, which arrived in late 2009, lost no one. As they prepared to turn the base over to the Iraqi army, they packed up whatever memorials remained and sent them back to the U.S. The blast walls had been painted over before they arrived.

The closure of this base might have at least symbolized the end of the war for soldiers who had fought elsewhere. But the sense of connection, when it existed, was a muted one.

"My old fire base in Baghdad is long gone," said Lt. Col. Paul Kreis, the battalion commander, on his third tour in Iraq since the 2003 invasion after also fighting in the 1990-91 Persian Gulf War. "Occasionally I get on Google Earth and look at it. But there&#8217;s just not a huge emotional connection. A lot of us have been on so many different FOBs."

Then, too, soldiers pick their own moments to be sentimental. The base&#8217;s name was apparently not one of them. Opened in 2003, it was said to have been named after Pat Summerall, the former football player and sportscaster, according to Sameh Youssef, a cultural adviser who served at the base in 2004.

In any event, many troops said they did see the closure of Summerall as a turning point.

Sgt. Jason Vangundy, who like many others here served with the same unit in eastern Baghdad during the "surge" in 2007 and 2008, said the dramatic decline in violence that has set the stage for the U.S. to begin leaving Iraq was its own reward.

In practice, the closure of Summerall was less an emotional catharsis than another chapter. The military, being the military, has a 113-point checklist for base closures.

Teams of soldiers sorted through the vast array of odds and ends left by units stationed here since the base opened in 2003, ranging from obsolete Humvee armor to spare parts and bomb disposal suits.

Environmental assessment teams visited. Contractors were brought in to clean out a cluster of apartment buildings once used as barracks but long since abandoned because of sniper fire.

The roughly 500 contractors who live alongside 2nd Battalion&#8217;s 600 troops packed up their own equipment, selling off vehicles and much of the kitchen equipment from the base&#8217;s dining facility.

The military turned over about $2 million worth of equipment to the Iraqi army, though not without some complications. The Iraqis refused to sign for a half-dozen pickups and sport utility vehicles the Americans offered to give them, officers said.

"Most likely they wanted to keep them for their personal use," said Capt. David Lawburgh, who oversaw the day-to-day process of the closure. "There&#8217;s an attitude of, &#8216;I&#8217;m signing for this, so I should profit from it.&#8217; Unfortunately, the more they demand and try to stonewall us, the more we have to get rid of stuff because they won&#8217;t sign for it."

That episode fed into the dim view of the base&#8217;s future common among most of the departing Americans.

A few were more hopeful. Kreis said the Iraqi officer taking over the base, Gen. Abdullah al-Dulawe, had proven himself as an able leader.

Al-Dulawe saw the Americans off with a certain flourish. A soccer game was organized between an Iraqi army squad and some U.S. soldiers. The Iraqis won, 7-1. Later, he invited a dozen Americans over for dinner.

He said he was sorry to see the Americans leaving but hoped their departure would build public confidence in the Iraqi army and convince people that the U.S. Army really was going to leave. The Americans, he allowed, remained unpopular.

"The British were here in the 1920s, and people still remember them because they can say, the British built this or that," he said. "The Americans, people don&#8217;t know what they did. They tried to build some things but they worked with corrupt people and the corruption ate everything. They should have brought in foreign companies."

At the closing ceremony two days later, al-Dulawe gave framed certificates to Kreis and several other officers. Kreis gave the Iraqi general a wooden replica of his regiment&#8217;s adopted insignia, the diamond-shaped emblem used by Ranger battalions in World War II. During the D-Day invasion, German defenders were said to have found the regiment&#8217;s fighting abilities indistinguishable from those of an adjacent Ranger unit.

"This is something very simple that my soldiers made by hand, which we give to very few people," Kreis said.

Outside, two American soldiers packed a favorite desk chair into the back of a Mine Resistant Ambush Protected vehicle. As the ceremony broke up, Iraqi troops made quick work of a modest table of refreshments.

The last of the U.S. troops headed down to the base&#8217;s airstrip, once named after Spc. Morgen Jacobs, a 20-year-old Californian killed by a roadside bomb in October 2004.

As they waited for their convoy, an Iraqi soldier sprinted over from the remains of the closing ceremony.

"He says they can&#8217;t figure out how to turn off the generator," the interpreter said.

A few minutes later, and a few miles down the road, the convoy taking them away from Summerall drove into the wall of a dust storm, and the soldiers headed on through the familiar haze of a country that, most hoped, they would never see again.