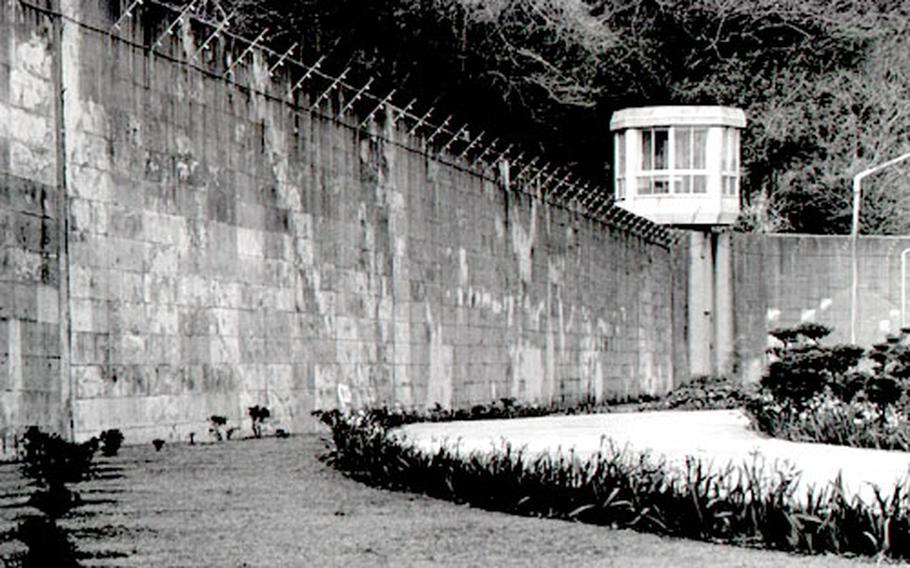 A large wall topped with barbed wire surrounds the prison in Yokosuka, Japan. The 18 U.S. servicemembers at the prison, and other qualified foreign prisoners, can petition to serve the remainder of their sentences in prisons in their home countries. (S&S file photo)

YOKOSUKA NAVAL BASE, Japan &#8212; American servicemembers in Japanese prisons might be allowed to finish their terms closer to home under an agreement that takes effect June 1, military officials said Wednesday.

Any prisoners covered by the status of forces agreement will be eligible to apply for a transfer after Japan last year ratified the Council of Europe Convention on the Transfer of Sentenced Prisoners.

Under the program, prisoners from other countries in Japanese jails can seek a transfer to their home states if they&#8217;re from countries that ratified the convention, and if their sentence is:

Final.Not under appeal.Not within six months of completion.Any of the 18 U.S. servicemembers currently in Yokosuka Prison can apply, military legal officials said.

But approval must come from each of three parties: the prisoner and both Japanese and U.S. governments.

&#8220;This is a multilateral treaty that has been signed on to by both Japan and the United States,&#8221; said Maj. Michael Apol, Chief of International Law at 5th Air Force in Yokota, Japan. &#8220;It does not contemplate or modify SOFA.&#8221;

&#8220;The only thing we do as the SOFA side of the house is work as a facilitator between the prisoners and the Department of Justice and the Bureau of Prisons.&#8221;

Apol said that during monthly meetings with the SOFA-sponsored prisoners, military attorneys will discuss whether a transfer request is possible or advisable.

A detailed information sheet on the Web site of the U.S. Embassy in Japan states that once the process begins, completing the transfers could take from 12 to 18 months.

Prisoners should consult with a federal public defender to determine whether they would spend less time in custody if they remained in a foreign jail, rather than transferring to an American prison and having the remainder of their sentence administered according to U.S. sentencing laws.

SOFA-sponsored U.S. prisoners in Japan are serving terms ranging from a few months to life, Apol said. All of the approximately 40 non-SOFA Americans now in Japanese prisons are being informed of the application process, an embassy official said. Any military or SOFA-sponsored prisoners must complete the process through the military.

In both cases, the U.S. Department of Justice and Bureau of Prisons will have final say about whether an application is approved and where the prisoner will be transferred.

Apol said prisoners will not be sent to military prisons in the United States. &#8220;Where they end up will be a Bureau of Prisons decision that takes into account the level of confinement, whether that be maximum security or minimum, or something in between,&#8221; he said.

Japanese officials ratified the treaty &#8212; which took effect in Europe in 1985 &#8212; in the belief that criminals more likely will be rehabilitated when in a more familiar environment, said a Japanese Ministry of Justice official.

That official said any prisoner with SOFA status will be given the &#8220;same consideration&#8221; as any other prisoner who applies.

Japan is the first Asian nation to ratify the treaty, officials said.

Complete information on the treaty and its implications for Americans can be found on the embassy&#8217;s Web site: http://usembassy.state.gov/tokyo