Some troops in Iraq look longingly to Afghanistan 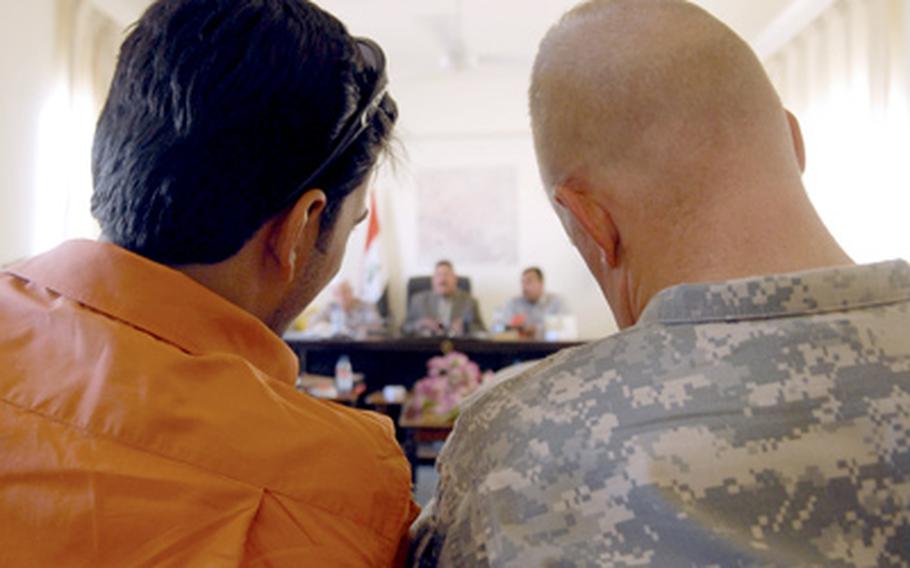 Lt. Col. Eric Timmerman, commander of 1st Battalion, 28th Infantry Regiment, 4th Infantry Brigade Combat Team, sits in the back of the room with an interpreter during a city council meeting in Duluiyah, Iraq, on Tuesday. Not long ago, U.S. troops ran such meetings and struggled to build Iraqi attendance and participation. In Iraq, servicemembers are often both frustrated and relieved by their changing roles from warfighters to peace-builders. (Michael Gisick / S&S)

Lt. Col. Eric Timmerman, commander of 1st Battalion, 28th Infantry Regiment, 4th Infantry Brigade Combat Team, sits in the back of the room with an interpreter during a city council meeting in Duluiyah, Iraq, on Tuesday. Not long ago, U.S. troops ran such meetings and struggled to build Iraqi attendance and participation. In Iraq, servicemembers are often both frustrated and relieved by their changing roles from warfighters to peace-builders. (Michael Gisick / S&S) 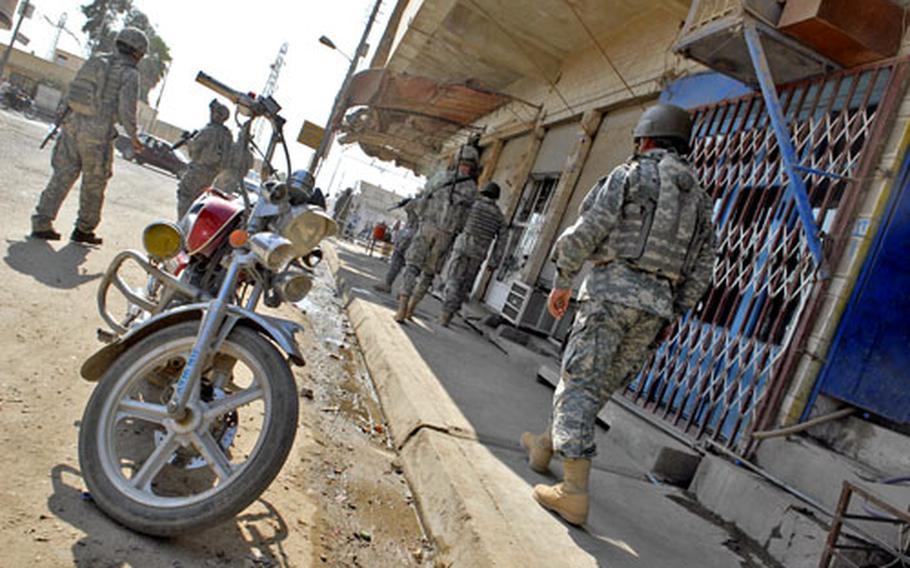 Soldiers with A Company, 1st Battalion, 28th Infantry Regiment patrol down a street in Balad, Iraq after a short meeting with the owners of a U.S.-funded business that gives small loans. U.S. soldiers now rarely patrol unless they are headed to a meeting and spend as little time on the streets as possible. (Michael Gisick / S&S)

COMBAT OUTPOST PALIWODA, Iraq &#8212; In many ways, the war in Afghanistan looms over the waning months of the U.S. effort in Iraq, an ironic reversal after years in which attention and resources were diverted here.

The counterinsurgency directives of Gen. Stanley McChrystal, the U.S. commander in Afghanistan, now hang on the walls at some bases in Iraq. Logisticians are busy planning ways to shift at least part of the massive accumulation of military hardware to Afghanistan.

And as U.S. units increasingly take a hands-off approach in Iraq, troops based in places such as this small outpost north of Baghdad can&#8217;t help but notice that there&#8217;s a lot of fighting going on in a country 1,000 miles to the east.

But while many in Iraq see a future deployment to Afghanistan as likely, and some see it as desirable, most say they&#8217;re content to stay where they are.

For some troops in 1st Battalion, 28th Infantry Regiment, that might be part of the rub. War isn&#8217;t supposed to be about city council meetings, and a month into their deployment that&#8217;s about the extent of the action these troops have seen. Their meals and showers are hot, their trailers are air-conditioned, and most leave the base for patrols only a few times a week and usually for only a few hours at a time.

Surrounded by veterans of multiple combat tours like Brannan, who served with this unit on its previous deployment to Baghdad during the &#8220;surge&#8221; in 2007, those yearning for action are largely left to admire the war stories of the veterans.

&#8220;Me and all my friends are safe here, so what am I gonna complain about?&#8221; Pfc. Stephen Michael Powers, 23, of Plymouth, Mass., said from the small air-conditioned trailer he shares with two other soldiers, each ensconced behind his own laptop.

Still, even Brannan acknowledges that Afghanistan would be, in its way, an easier mission.

But many also see a sort of closure in this tour, a sense that Iraq is coming around to something like progress.

Reconstruction projects funded by the Commander&#8217;s Emergency Response Program remain one of the increasingly few ways for U.S. units to keep a place at the table in a country that seems intent on going its own way. The 4th Brigade, 1st Infantry Division, which includes this battalion, estimates it will spend between $50 million and $70 million on projects in Salahuddin province, roughly the same as the unit it replaced.

Three of the battalion&#8217;s officers stopped by for last week&#8217;s council meeting in Duluiyah, a small town north of Balad. A couple of years ago, city councils in Iraq were essentially congregations of whomever the Americans could persuade to come and listen to American presentations on, say, the importance of picking up trash.

The councils are still U.S.-appointed bodies that have yet to stand election, but attendance is less a problem. In Duluiyah, the Americans arrived to a full house already under way, sat near the back and said almost nothing. They spoke only when the council chairman asked if they had a crane that could be used to move a checkpoint. They didn&#8217;t.

Outside, their convoy of hulking, heavily armored Mine Resistant Ambush Protected vehicles waited in the street. The American officers, keen to be as unobtrusive as possible, worried that the MRAPs caused too much disruption to traffic and said they might consider going back to Humvees if things stay quiet.

Groups of schoolchildren filed past as members of the U.S. contingent hurried to their vehicles. Brannan waved to a group of boys.

Once upon a time, they would have all asked for something. Now, only one boy asked halfheartedly if the American had a soccer ball.