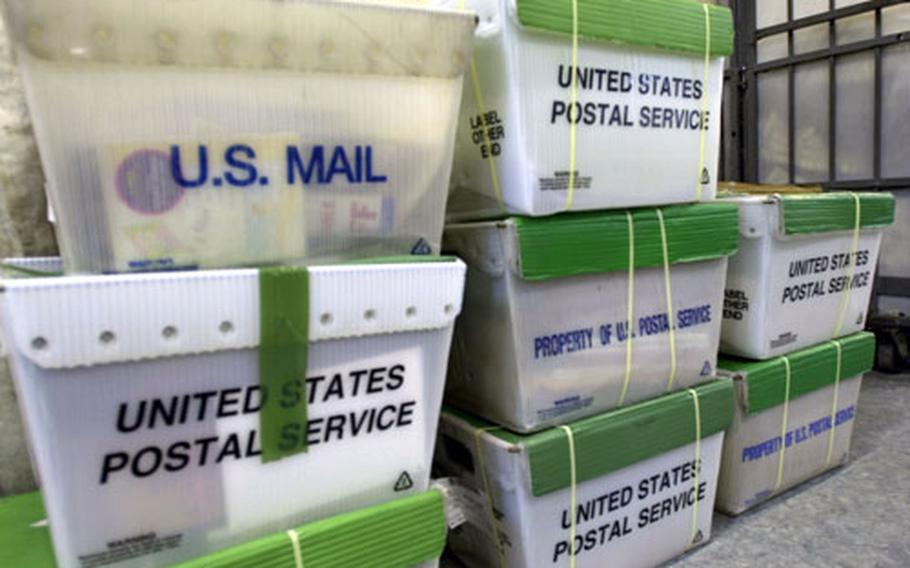 Some of the tens of thousands of letters, boxes and packages that come to South Korea daily aboard commercial and cargo flights. (Jeremy Kirk / S&S)

But somewhere along the line, it just didn&#8217;t happen that way.

Postal privileges are a benefit for those working overseas, as ordered items aren&#8217;t subject to host country import taxes. And the military postal system &#8212; even with its sometimes frustrating delays &#8212; usually is speedier and cheaper than using international mail.

But many postal customers interviewed said that while they have confidence in the military postal system, ordered items &#8212; especially high-priced electronics &#8212; sometimes never arrive, leaving customers negotiating with retailers for replacements or refunds.

The post office doesn&#8217;t receive that many missing-item complaints, said Gregory Mackessy, director of the Army&#8217;s postal operations in South Korea. Despite anecdotal tales of missing items, no criminal investigations into missing mail have been initiated, according to 8th Army officials.

Part of the frustration is the inability to track items as they are sent to South Korea. The military post office in South Korea lacks the equipment that lets people use the Internet to check their packages&#8217; current status, Mackessy said.

The post office can scan outgoing express mail into the tracking system. But incoming express packages must be logged by hand, along with certified and insured mail, he said.

For logged Express mail, the post office here sends a form to the U.S. Postal Service, where the mail&#8217;s status is updated by computer, Mackessy said. Customers can track its progress on the Internet.

The Military Postal Service Agency is working with the USPS to get the computer equipment required for full tracking, Mackessy said. Most postal equipment is given to the armed services since military mail is considered an extension of USPS, he said.

Epstein ordered his Nikon D-100 digital camera with accessories from a company in New York in November. In the past, his equipment usually arrived in a few weeks but after a month, the camera hadn&#8217;t.

&#8220;After a couple weeks, I sent them an e-mail, and they replied to hold fast,&#8221; said Epstein, a photography hobbyist who works for 8th Army.

The company then told him they couldn&#8217;t track the package, Epstein said.

After spotty communication with the seller, he eventually filled out an affidavit so the company could make a claim with its insurance company.

Almost two months after he placed the order, the purchase was removed from his credit card. Still without the camera, he ordered one from another company.

Epstein said he was unsure if the mishap was the company&#8217;s fault or if someone snatched the package during delivery.

Last year, McGill, a management analyst at Yongsan Garrison, ordered a graphics tablet &#8212; a pen-like device that operates similar to a mouse &#8212; but it never came. It was mailed from the Fort Huachuca, Ariz., area and insured.

Insurance reimbursed McGill $365 but he&#8217;s still unsure what happened. It was the first time he&#8217;d experienced a problem.

Missing mail can be reported by filling out Form 1510 at the post office. That initiates a search, Mackessy said. The forms also let postal inspectors track if a specific APO is reporting a lot of missing mail.

Expensive and irreplaceable items should be sent via registered mail because such mail is accounted for at every stop, Mackessy said. Every time custody of the package is transferred, someone must sign for it. It costs more but is more accountable, he said.

The San Francisco substation is the last stop before packages are sorted and flown to South Korea. Military liaisons in San Francisco supervise the distribution of military mail, Mackessy said.

The mail is trucked from Incheon to the Army-Air Force sorting facility at Kimpo. Boxes, letters and packages are sorted according to area and driven to bases around 4:30 a.m. Reaching the bases takes about a day, Mackessy said.

Starting this month, the postal system changed its truck pickup times at camps Hialeah, Walker and Carroll to allow sending mail on a late flight out of South Korea. Now it should reach San Francisco by the second day of processing instead of the third, he said.

Kelley, who was in postal operations with the Air Force and worked for the U.S. Postal Service after retiring, is to inspect every post office in South Korea quarterly. The offices have hired more civilian employees for continuity, since soldiers are on one-year tours and may have little postal experience, Kelley said.

Those who think an item is taking too long may complete a form that initiates a search, Mackessy said. The sender also can file a form with the post office, he said.

But it&#8217;s the customer&#8217;s responsibility to ensure their envelopes and packages have the right address, including the correct zip codes, he said.

Usually, the last four number of a unit&#8217;s zip code are the last four numbers of the unit number. For example: Stars and Stripes, Unit 15334, APO AP 96205-5334. But some units are different, Mackessy said, and people should ensure the correct address.

The company that sold Vogan the Apple PowerBook eventually gave him a refund but the process was stressful, he said.

Next time he buys something, Vogan said, it will make it to South Korea.