Some think time not right for talks with Taliban Buy Photo
An Afghan army commander examines damage to his armored fighting vehicle caused by a Taliban rocket during battles in Kunduz city. The Taliban's lightning occupation of the city was its greatest victory since 2001. (Josh Smith/Stars and Stripes)

Buy Photo
An Afghan army commander examines damage to his armored fighting vehicle caused by a Taliban rocket during battles in Kunduz city. The Taliban's lightning occupation of the city was its greatest victory since 2001. (Josh Smith/Stars and Stripes) Buy Photo
Afghan army soldiers run for position during a firefight with Taliban gunmen in Kunduz city. It took government troops about two weeks to dislodge most Taliban fighters. (Josh Smith/Stars and Stripes) 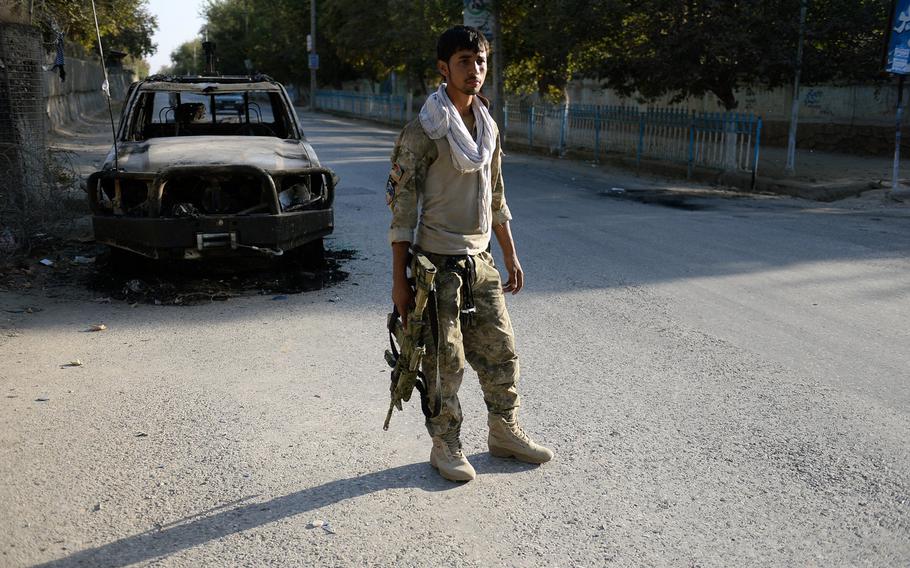 Buy Photo
An Afghan police officer mans a checkpoint next to a burned-out military truck in Kunduz after security forces pushed Taliban fighters from the city's center. (Josh Smith/Stars and Stripes)

The Afghan government’s drive for negotiations with Taliban insurgents has been met with increasing skepticism by some Afghans who believe the time is not right for a peace process, fearing that negotiations could lead to unfavorable compromises with an enemy that remains far from beaten on the battlefield.

“We have to continue the peace process, but what I worry is that Afghanistan right now is at its weakest position since the fall of the Taliban in 2001,” said local analyst Helena Malikyar. “So I think this would be a very bad time for the Afghan government to reach a settlement.”

Representatives from Afghanistan, the United States, Pakistan and China have been meeting to work out a road map for peace talks involving the insurgents and the Afghan government. The fourth meeting of the so-called Quadrilateral Coordination Group is scheduled for Tuesday in Kabul. Taliban guerrillas have been invited to attend the upcoming session, but they have not yet said they will attend.

Since he assumed office in September 2014, President Ashraf Ghani has made peace talks with the Taliban a priority of his administration. He also has reached out to the Pakistanis, who are often blamed by distrustful Afghans for tacitly helping the Taliban and providing a safe haven for the group’s leadership.

Exploratory talks between representatives of the insurgents and government fell apart last summer after the announcement that longtime Taliban leader and founder Mullah Mohammad Omar had died two years before. His successor, Mullah Akhtar Mansoor, faced serious challenges to his leadership from rival factions.

Since then Mansoor, who was in charge of the guerrillas during last year’s tentative peace moves, appears to have consolidated his power. In the meantime, the Taliban have launched a series of offensives that have stretched government forces to the limit.

The insurgents now control more territory than at any time since the U.S.-led invasion 15 years ago that ousted them from power. In the fall, the insurgents briefly captured the northern city of Kunduz — the first time it controlled a major urban center since 2001. In southern Helmand province, they have closed in on government forces in key areas, leading the U.S. to launch bombing raids and send in additional troops to advise and assist Afghan forces.

The escalating bloodshed has led many to question whether this is the right time for a political solution to the war.

“The first thing that needs to be done is for the Afghan state to once again reach a higher position than the insurgents in the combat field, and it’s impossible for the Afghan security forces to do that alone,” Malikyar said. “That is why the U.S., once again, has to increase its combat mission in Afghanistan and help the Afghan state push back the Taliban, to some degree at least.”

The U.S.-led coalition in Afghanistan ended its combat mission at the end of 2014 and the insurgents have taken advantage of the absence of their superior firepower both on the ground and in the air to press Afghan forces, continuing their offensives well into winter, when they normally would retreat to havens in Pakistan. As a result, both sides have suffered record casualties, officials say.

Critics of the government’s push for negotiations include some high-profile politicians, including Ahmad Zia Massoud, who served as vice president under former Afghan President Hamid Karzai from 2004-2009 and is the younger brother of national hero Ahmad Shah Massoud, who was killed by al-Qaida, shortly before the 9/11 terrorist attacks in the United States.

“Many people now believe that a military victory against the Taliban is achievable, and that there should be no concessions given to insurgents,” Massoud said.

Thomas Ruttig, co-director of the Afghan Analysts Network, said the issue has become “very polarizing” among Afghan citizens, partly because the four-country group has not revealed what incentives might be offered to insurgents, or what concessions might be granted.

Afghanistan has seen improvements in areas such as women’s rights, freedom of expression, freedom of speech, and democratization over the past decade — all things that conflict with Taliban ideology, and which the group suppressed when it controlled the country from 1996-2001.

“The majority of Afghans want peace with the Taliban,” said Ahmad K. Majidyar of the Naval Post Graduate School, who advises the U.S. military on Afghanistan. “They are tired of decades of war that has ruined their lives. However, they don’t want peace to come at the expense of everything that they achieved, and if it means reverting back to the era of the 1990s.”

The Taliban indicated during informal meetings in Norway and Qatar last year that they would allow better treatment of women and minorities within the framework of “Islamic law” as they see it.

Although difficult to gage, some studies show about 10 percent of Afghans support the group.

“They’re not a monolithic organization the way that some people want to paint them as,” U.S. State Department spokesman John Kirby said of the Taliban earlier this month after insurgents claimed responsibility for a deadly suicide attack outside a police station in Kabul. “We still think that there’s room to make [peace talks] happen. And again, today’s attack is just that much more of a reminder that that’s really the answer here.”

While critics maintain that the unsettled tensions within the Taliban could lead to the splintering of the group, thus making it more difficult to reach a deal because some factions would likely not accept it, others believe the timing is ideal.

“All indications appear to be favoring a division among the Taliban,” said strategic analyst Nawaz Shuja. “If there can be an opportunity to talk, I think more and more Taliban groups might break free of the centralized leadership.”

“When you don’t engage, you can’t really differentiate between the different groups within the Taliban,” he said, “and I think it’s important to be able to do that so that you can peel away those groups that may have genuine local grievances that can be addressed.”

According to the Council on Foreign Relations, “the United States has a vital interest in preserving the many political, economic and security gains” in Afghanistan.

“A resurgence of the Taliban insurgency could once again turn Afghanistan into a terrorist save haven,” it said in a recent report. “Moreover, internal instability in Afghanistan could have larger regional ramifications as Pakistan, India, Iran, and Russia compete for influence in Kabul and among influential subnational actors.”

Zubair Babakarkhail and Stars and Stripes reporter Slobodan Lekic contributed to this report.