Some ‘Sons’ get head start on new jobs 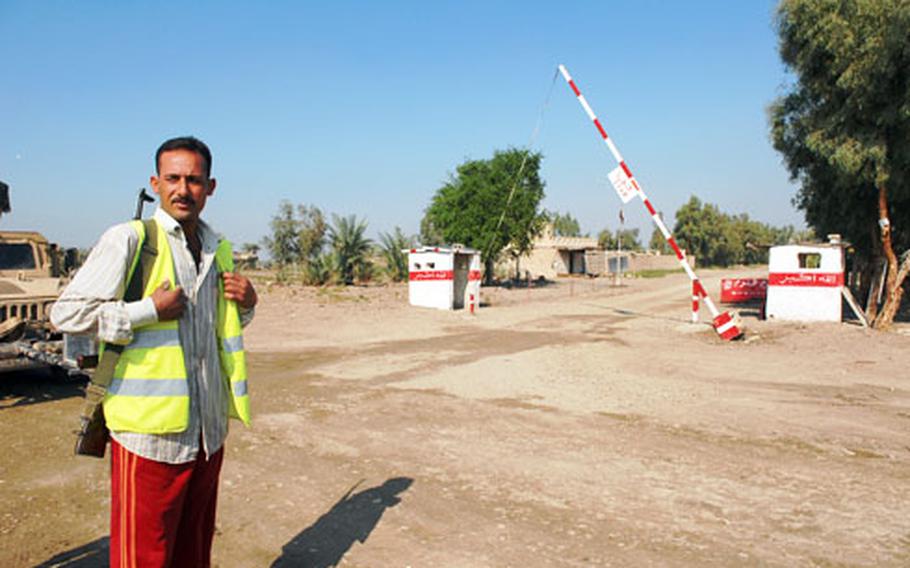 A "Sons of Iraq" member stands near a checkpoint Saturday in Radwaniyah, a district just south of Baghdad. The American unit in charge of the area started working on transferring members to Iraqi security forces about a year ago. (James Warden/S&S)

BAGHDAD &#8212; "Sons of Iraq" members in Radwaniyah are having better luck than many of their counterparts in other areas at finding jobs with the Iraqi security forces. Then again, that shouldn&#8217;t be a surprise since this district just west of Baghdad had almost a year&#8217;s head start over most other areas.

The government of Iraq formally took control of the "Sons of Iraq" from the Americans on Oct. 1. Officials promised to accept 20 percent of the members into Iraqi security forces, such as the Iraqi army and the Iraqi National Police.

Gen. Asad Nasser, the primary "Sons of Iraq" leader for the area, said his men are already within 4 percentage points of that goal. He&#8217;s had 203 of his 1,248 members accepted into the Iraqi security forces, although that number includes 42 members still waiting for spaces to become available at the academy. That&#8217;s 16 percent who have transferred to the Iraqi security forces just one month after the Iraqi government took control.

An American unit deserves much of the credit for making such headway. Headquarters and Headquarters Company, 4th Battalion, 64th Armor Regiment &#8212; the American unit responsible for Radwaniyah &#8212; began working to move "Sons of Iraq" members into the Iraqi police and army long before the transition to Iraqi government control was on the horizon, said Capt. David Simms, the company commander.

Simms said he knew changes were coming because the groups were never intended to be permanent and because key events like the U.S. elections were imminent. So his unit had its first Iraqi police recruiting drive within a week of its arrival in Radwaniyah about a year ago.

Simms concedes that the process went anything but smoothly. Filling out the forms required arduous hours in the Radwaniyah police station only to have the Iraqi government repeatedly reject the applications. But each time, "Sons of Iraq" members completed a new batch of applications and tried again. The strategy was simply to keep pestering the Interior and Defense ministries.

Said Nasser: "We are the best section because we&#8217;re not just waiting on the Iraqi government."

The area had other advantages besides HHC&#8217;s head start. Radwaniyah did not have a police station until recently. The 97 Iraqi police who now fill it are all former "Sons of Iraq" members. The station is actually allowed 330 people, and most of the remaining spots will likely be filled by local members, Simms said.

These totals are just the results of the Americans&#8217; efforts. Simms expects about 40 percent of the "Sons of Iraq" to eventually find work with the Iraqi security forces once the Iraqi government launches its own push.

However, Col. Emad Hatim Madlom, a local "Sons of Iraq" leader, doesn&#8217;t think the government has a plan for such a transition.

Madlom thinks at least half of the "Sons of Iraq" members need to find jobs before he can consider the transition a success, although he wouldn&#8217;t mind seeing some of those men transfer into civilian jobs.

Yet even Madlom can&#8217;t help but smile when he sees former "Sons of Iraq" members step into Iraqi police trucks to inspect checkpoints run by the organization they once belonged to.