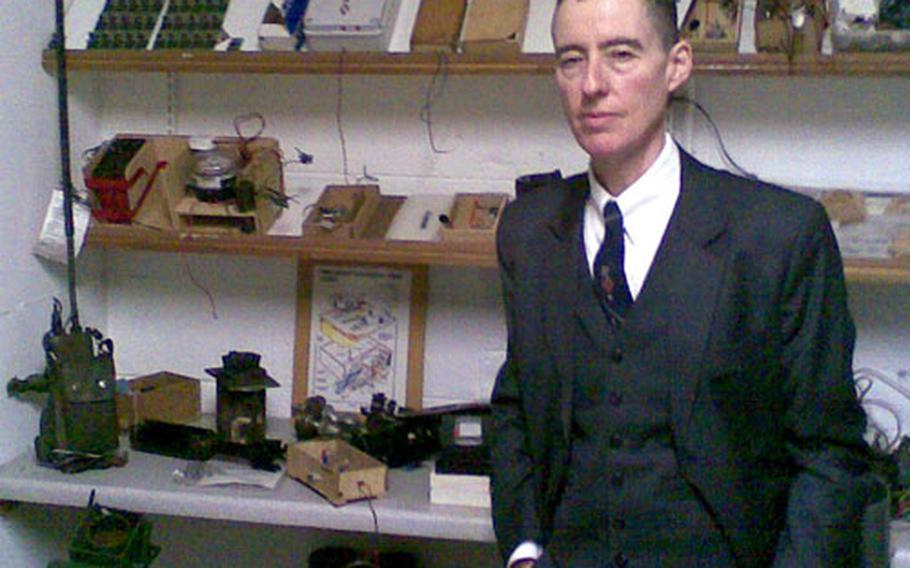 Andy Oppenheimer, a weapons of mass destruction consultant and author of the new book “IRA: The Bombs and the Bullets,” said that, unlike in Iraq, the thousands of IEDs made in Northern Ireland blew up more buildings than people, but the intended result was the same: public fear. (Courtesy of Andy Oppenheimer)

WASHINGTON &#8212; In 1972, the worst year of bombings in Northern Ireland&#8217;s 140-year history of conflict, the Irish Republican Army exploded roughly 1,300 homemade devices from Belfast to London, or more than 100 per month.

In February 2009, U.S. Army Lt. Gen. Lloyd Austin, the second-in-command in Iraq, boasted that violence there had fallen to a level that the local population and U.S. forces could hardly believe: roughly 100 terrorist and insurgent attacks per week.

The violence in Northern Ireland &#8212; brute terrorism to some, a legitimate insurgency to others &#8212; is in many ways incomparable to today&#8217;s much deadlier global terrorism. But scholars and many who lived through "The Troubles" see links and a chance to learn from terrorism&#8217;s past.

The IRA roared back into the headlines March 8 after gunmen from fledgling splinter factions killed two British soldiers and later a policeman.

At a Washington coffee shop three days after the attacks, Andy Oppenheimer, a weapons of mass destruction consultant and author of the new book "IRA: The Bombs and the Bullets," pointed to a related story in the morning&#8217;s New York Times.

After all, the real aim of terrorism is creating a sense of fear, not a body count.

"You don&#8217;t need a very sophisticated set of weapons," Oppenheimer said. "Chemical, biological, radiological &#8212; who needs it? They can create pandemonium with the simplest of methods and the most complex, sophisticated planning, training. That&#8217;s how it&#8217;s done," he said.

In Oppenheimer&#8217;s book, he credits IRA precursors in the 1880s for staging the world&#8217;s first coordinated improvised bombing attack.

"To this day," he writes, "the IRA remains the world&#8217;s most advanced builders of IEDs and its talent in making bombs has sadly influenced other terrorist groups."

Intelligence authorities have linked the IRA to terrorists in Libya and Algeria, Basque separatists in Spain, the FARC in Colombia, the Palestine Liberation Organization and its wings al-Fatah and Black September, and Lebanese and Syrian training camps near Beirut.

Some see those ideas and methods, if not the IEDs themselves, transferring downrange.

"I think if it has come it&#8217;s basically because of Hezbollah&#8217;s study of what the IRA did and then passing that on to insurgents in Iraq, who in turn would pass it on to insurgents in Afghanistan," said Bruce Hoffman, a terrorism historian and professor at Georgetown University.

While condemning any romantic notions that the IRA were anything more than killers, Oppenheimer praised their ingenuity and that of other small groups.

"Guys [in Iraq and Afghanistan] with very simple weaponry can challenge the collective wisdom and the technological knowledge of any leading industrialized state. And that was very much the approach the IRA had," said Hoffman. "The sophistication was in the simplicity."

In its wake, the IRA created a generation of British counterterrorism specialists who later shared decades of experience with Americans in Iraq and Afghanistan.

"We had a great deal of assistance from our allies," a Pentagon spokeswoman told Stars and Stripes. "The U.K. has provided subject matter experts with considerable Northern Ireland experience to assist the U.S. in its counter-IED efforts."

And the U.S. has welcomed the help; in the early days of the Iraq war, terrorism experts and observers hailed British counterterrorism operatives as more experienced and professional than young Americans coming fresh off a military invasion.

"[In Iraq] the British army is light years ahead of us," said Kevin Cullen, the Boston Globe&#8217;s former Dublin bureau chief who has covered the IRA for more than 20 years.

After the first waves of IED attacks, roughly six months after the 2003 invasion of Iraq, British forces began deploying specialist units based in Northern Ireland.

British counter-IED strategy focuses on protecting troops through better tactics, and capturing IEDs to learn how to beat the technology, according to a British officer who served in both Northern Ireland and Iraq.

One lesson was not to rely on body armor or equipment. Tactics and procedures are two-thirds of the forced protection equation, they say.

For example, British training focuses heavily on low-level drills. Before taking cover on a patrol, British troops are taught a five- and 20-meter checking system: Each man should scan five-meter radius for wires, antennae or other indicators of a possible IED before entering the position, creating a cleared zone. The platoon should do a 20-meter scan.

They also have shared house-clearing tactics; British units knew not to shine flashlights as they entered dark houses because the IRA would emplace light-sensitive detonators.

Additionally, British bomb forensics teams pick apart IEDs to learn how they work, where they are made and by whom. The U.K. also sent explosive ordnance disposal trainers to the United States.

A spokesman for the Defense Intelligence Agency confirmed the British have helped Americans develop counterterrorism methods but declined to elaborate.

So, from what was an early counter-IED task force the Pentagon stood up the Joint Improvised Explosive Device Defeat Organization in 2006. JIEDDO spokeswoman Irene Smith credited the slowdown of IED "events" in Iraq since last year to focusing on more jammers and training, and the "surge" of troops.

But American forces still encounter roughly 1,400 IEDs in Iraq and Afghanistan each month. And though approximately two-thirds are found and cleared, and in Iraq IED attacks have slowed altogether, in Afghanistan, Smith said, "IEDs are the Taliban and insurgents&#8217; primary methods of attack."

For Oppenheimer, IEDs were the real story of the IRA.

IRA precursors set off more than 60 homemade bombs from 1867 to 1887, hitting London targets such as the Underground and the Tower of London.

"They were already fitting timers to bombs before we were wearing wristwatches," Oppenheimer said. And what started as barrels of gunpowder evolved into candy jars disguising gasoline bombs or incendiaries inside plain cardboard boxes with clothespin triggers.

By the late 1960s the IRA was detonating thousands of IEDs. Posters warned citizens not to pick up cigarette packs, reading: "They may look harmless, but they could be firebombs."

The homemade detonators found in Iraq, Hoffman said, look strikingly familiar. The IRA would attach radar detectors to bombs and set them off with a radar gun. Or they would use a set of photography flash bulbs as a detonator.

"They would adjust the side view mirrors of the cars so they could bounce the flash beam around a corner," Hoffman said. In Iraq, insurgents used the same technique with infrared beams.

In a reversal of skills, and politics, a British army special reconnaissance unit who served in Iraq and Afghanistan recently was invited to Northern Ireland to assist with surveillance there.

It was a long road to this point, IRA historians note.

"So, seven years into the war on terrorism, we&#8217;re not even a third of the way to where the British were with all of [those] advantages."