Some say they're sickened by mold in military housing near Grafenwöhr Families living in some off-post housing units in Kaltenbrunn near the Grafenwöhr Training Area claim mold is making them sick. (Seth Robson / S&S)

Families living in some off-post housing units in Kaltenbrunn near the Grafenwöhr Training Area claim mold is making them sick. (Seth Robson / S&S) 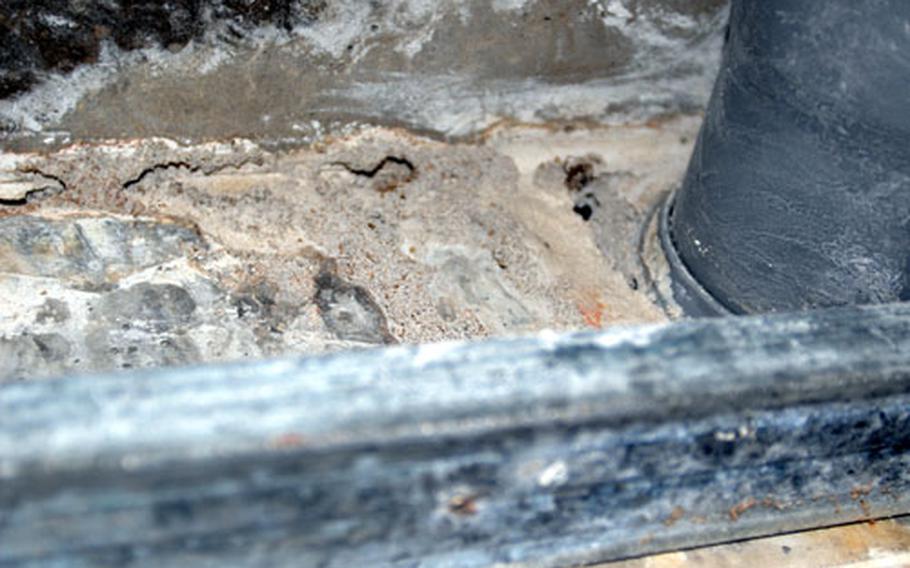 Mold grows around a fixture in a downstairs bathroom in the home of Sgt. 1st Class Leon and Rochelle Clayton in the military housing area of Kaltenbrunn near Grafenwöhr Training Area. (Seth Robson / S&S) Yellow tape seals off the door hatch leading to the attic at the home of Sgt. 1st Class Leon and Rochelle Clayton in military housing area of Kaltenbrunn near Grafenwöhr Training Area. The family complained of health problems they attributed to mold, and has since been offered new quarters in the Netzaberg housing area. (Seth Robson / S&S)

GRAFENW&#214;HR, Germany &#8212; Family members and soldiers from the 2nd Cavalry (Stryker) Regiment say their health is suffering due to mold growing in their housing area.

Several families from the regiment, which is to deploy to Iraq in August, moved out of houses in the military housing area of Kaltenbrunn near Grafenw&#246;hr Training Area this month after Army inspectors discovered mold and contaminated timber in the units.

According to residents, Kaltenbrunn includes about 80 homes, occupied mostly by 2nd Cav noncommissioned officers. Army health and public works officials inspected 64 of the homes the day after the mold issue was raised during a town hall meeting in April, according to U.S. Army Garrison Grafenw&#246;hr public affairs officer Nick D&#8217;Amario.

A letter from the garrison&#8217;s housing manager, Bob Arbios, to Kaltenbrunn residents stated that moist areas were found in 45 of the 64 units visited and evidence of possibly significant mold problems was found in four units.

Arbios said that most cases of mold found in the neighborhood could be treated simply by washing the area with detergent or bleach, D&#8217;Amario wrote in an e-mail to Stars and Stripes.

Kaltenbrunn residents invited Stripes to inspect mold and water damage in one of the units last week.

The unit&#8217;s attic was sealed off with black and yellow tape. The tape was there because of contamination by a range of dangerous metals leached by arsenic-treated timber, said Rochelle Clayton, wife of Sgt. 1st Class Leon Clayton. In another part of the house, a large clump of sponge-like mold was visible behind a piece of recently stripped ceiling.

Rochelle Clayton said the family was living in the unit before mold forced them to move into a hotel this month. Clayton said she had experienced watery eyes, a sore throat, swollen glands, ringing in her ears and hair loss since moving to Kaltenbrunn in September.

She said her 12-year-old son, Chandler, developed respiratory symptoms that included an irritated cough that lasted throughout winter, and her husband also had breathing problems. He had not had previous asthma problems but started using two inhalers and had trouble running after moving into the house.

Since the family moved to a hotel, all three have recovered, she said.

Tanya Kirk, the spouse of another 2nd Cav NCO, said her family moved out of Kaltenbrunn after her son, Logan, 10, experienced severe respiratory problems that doctors attributed to their moldy house. Kirk said her husband also developed breathing problems after returning to the house after field exercises and temporary duty in the United States.

She said she asked authorities about water damage that was visible in the house when she moved in last August. She said she was told not to worry about it.

But after her son became sick, she mentioned the mold to his doctor, who recommended the family move.

Persuading the Army to move the family was an arduous process that involved appeals to virtually everyone in the chain of command up to the garrison commander, Kirk said.

But when they finally moved to a new house in nearby Hutten everyone&#8217;s health improved, she said.

&#8220;After two days, Logan stopped having snot run down his face and black circles around his eyes,&#8221; she said.

But Kirk is worried that the problems in her old house have not been fixed properly. Instead of ripping out walls to remove the mold, workers had merely scraped off surface mold and applied mold killer, she said.

Some families who would like to move out of Kaltenbrunn appear to have run into a brick wall.

Last year, the garrison&#8217;s housing office ditched a plan to house new arrivals within a 30-minute drive of post and started offering troops homes as far as 45 minutes away because of the lack of adequate housing.

Last week, Rochelle Clayton said her family wanted to move to a new unit, but the Army told them they must return to their house in Kaltenbrunn once remediation work is done.

&#8220;They want to rip out the walls and expose all these mold spores to my mattress and all our clothes so they can fix it and move us back in,&#8221; she said.

The family moved into a hotel on the same day her son found out his father was going to Iraq again, she said. &#8220;We need to be a family and not have the hardship of sharing a room with our child and dogs locked up in a room. It is not a good way to be a family, especially with the impending deployment,&#8221; she said.

Now it appears Rochelle Clayton won&#8217;t have that hardship.

The Army called the Claytons on Friday to offer them a newly completed home in the Netzaberg housing area, which is being built to handle the influx of soldiers.

Mold factsExposure to damp and moldy environments can cause a variety of health effects. Here are some facts about mold:

&#182; Mold growth, which often looks like spots, can be many different colors and can smell musty. If you can see or smell mold, a health risk may be present.

&#182; Some people are sensitive to molds. For these people, molds can cause nasal stuffiness, throat irritation, coughing or wheezing, eye irritation, or, in some cases, skin irritation. People with mold allergies may have more severe reactions.

&#182; Mold is found both indoors and out. It can enter your home through open doorways, windows, vents and heating and air-conditioning systems. Mold in the air outside can attach itself to clothing, shoes, bags or pets and can be carried indoors.

&#182; Mold will grow in places with a lot of moisture, such as around leaks in roofs, windows or pipes, or where there has been flooding. Mold grows well on paper products, cardboard, ceiling tiles, and wood products. Mold also can grow in dust, paints, wallpaper, insulation, drywall, carpet, fabric and upholstery.

&#182; If mold is growing in your home, it needs to be cleaned, and any moisture problems need to be fixed.

&#182; Mold growth can be controlled by keeping humidity levels between 40 percent and 60 percent; promptly fixing leaky roofs, windows and pipes; thoroughly cleaning and drying after flooding; and ventilating shower, laundry and cooking areas.

How to get rid of mold:&#182; Remove things from the home that are made out of cloth, unless you can wash them with hot water. Also remove items that can&#8217;t be cleaned easily (like leather, paper, wood and carpet).

Never mix bleach with ammonia or other cleaners.Wear rubber boots, rubber gloves, goggles and a mask that blocks airborne particles.Open windows and doors to let in fresh air when you use bleach.Mix no more than 1 cup of bleach in 1 gallon of water.Wash the item with the bleach and water mixture.If the surface of the item is rough, scrub the surface with a stiff brush.Rinse the item with clean water.Dry the item or leave it out to dry.Inspections find spores, other substances

During a town hall meeting in April, residents of the Kaltenbrunn housing area complained to Army leadership about mold in their living areas. Stars and Stripes has obtained two reports by the U.S. Army Garrison Grafenw&#246;hr Industrial Hygiene Field Office that look at contamination of one house in the neighborhood.

One report states that visible mold was observed on the ceiling of one room.

&#8220;The wallpaper is separating from the walls in several areas allowing mold to grow on the inner layer. The presence of mold increased the potential for airborne mold spores in the residence,&#8221; the report states, adding, &#8220;the moisture retention throughout the residence significantly increases the potential for further mold growth.&#8221;

It also states that: &#8220;The tenants are experiencing adverse health effects. The physician&#8217;s [sic] has diagnosed that environmental factors may be exacerbating the child&#8217;s medical condition.&#8221;

The other report states that a green substance found on beams in the attic of one of the units is &#8220;heavy metal leachate containing chromium, copper, lead, zinc and possibly arsenic.&#8221;

&#8220;The leachate dusts appear to be contained in the attic, however trace levels of copper dust were detected in the residence,&#8221; the report states, before recommending that the beams be sealed and the attic vacuumed to remove contaminants.

Some of the residents in Kaltenbrunn have compiled their own database that includes dozens of photographs of mold and water damage as well as a door-to-door survey that shows 14 families in the housing area reported respiratory illness since they moved in.

Additionally, 26 families reported water damage in their homes, and 14 reported visible mold in their units.