Some rushing, others chill as Pacific mailing deadline nears 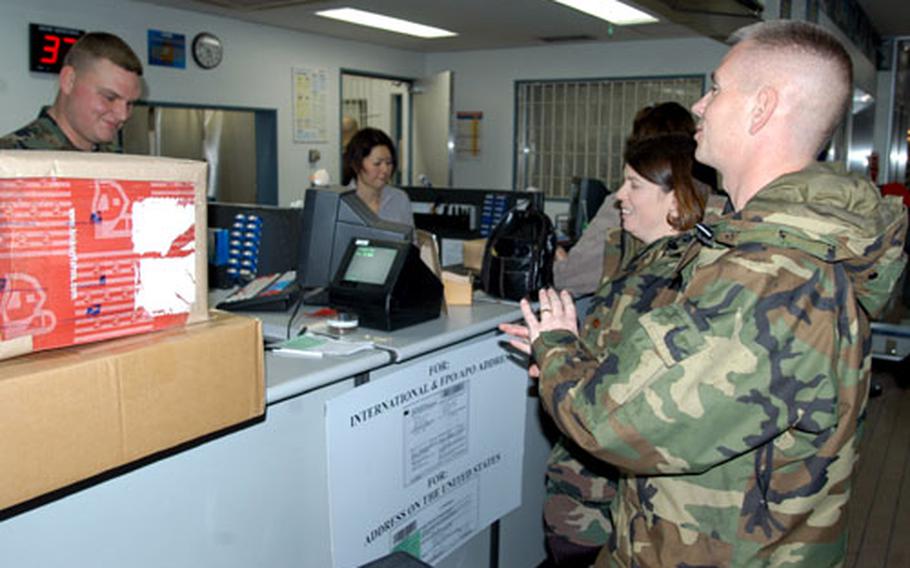 Capt. Chris Tooman and Maj. Kimberly Tooman wait to hear from postal clerk Senior Airman Matt Nyulassie how much it will cost to mail several packages to the States Thursday from Misawa Air Base, Japan. (Jennifer H. Svan / S&S)

MISAWA AIR BASE, Japan &#8212; At U.S. military bases across the Pacific, the deadline for mailing packages to the States in time for Christmas is fast approaching.

Customers who want to guarantee their gift will be under the tree Dec. 25 must mail by Monday &#8212; Saturday for parcel windows, like at Misawa, which are closed on Monday &#8212; and fork out extra bucks for Express service, according to postal officials at Misawa.

&#8220;If you send it Priority, the standard is seven to 10 days; therefore, it should make it,&#8221; postal clerk Staff Sgt. James Strong said, even though the official deadline for Okinawa and Japan was Dec. 11 for Priority Mail and letter and first class.

Some people opt for Express Mail no matter the deadline, &#8220;spending a couple hundred dollars just to get it there on time,&#8221; Strong said.

Maj. Kimberly Tooman and her husband, Capt. Chris Tooman, who were at the post office Thursday with a stack of boxes and two foot lockers, said Express Mail is worth the extra cost for nieces and nephews in Pennsylvania.

Servicemembers overseas, she said, have to plan in advance &#8220;to get everything wrapped and shipped in time.&#8221;

&#8220;I&#8217;m a slacker,&#8221; he quipped, adding that his wife still had a few boxes to send. Peters said he usually ships presents in November, but this year, his stateside relatives were difficult to shop for, offering no suggestions.

Not all customers are so carefree during the holiday mailing crunch.

Nyulassie tries to wear a smile, all the same.

Customers have been known to bang on the locked glass doors after the 5 p.m. closing time.

Lucero said they can&#8217;t let stragglers in because packages have to be processed by 6 p.m. to catch the 7 p.m. flight to Tokyo.

Master Sgt. Garrick Wimbush, the Misawa postmaster, expects to see a last-minute crunch &#8212; not on Saturday but the weekend before Christmas.

Misawa Air Base postal workers offer some tips on mailing packages during the holiday season:

&#8220;Pick up customs forms beforehand and you can attach them at home. It saves time at the post office,&#8221; Lucero said.

Place clear tape over a label to prevent ink from running if it gets wet.