Some off-limit sites in USAREUR list closed decades ago 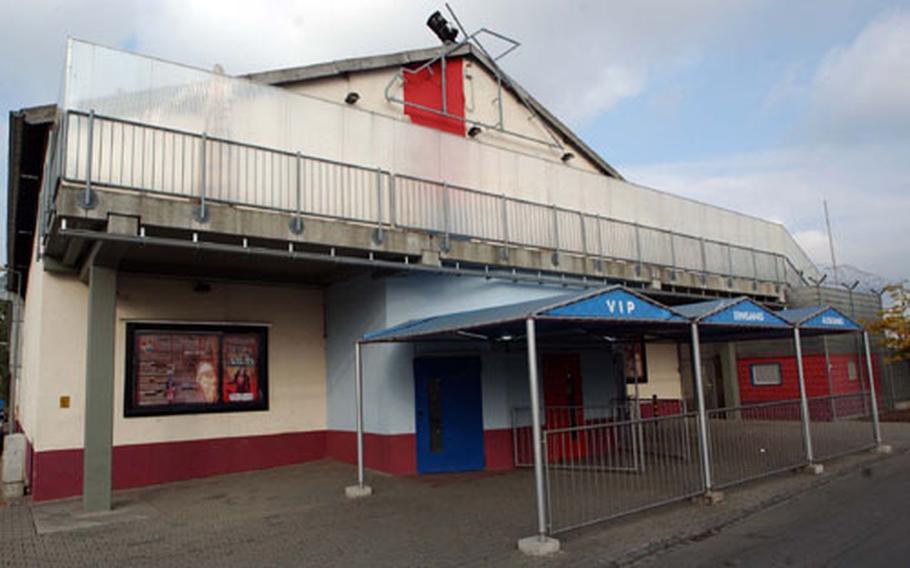 The Natrix disco in Darmstadt is one of several nightclubs on the U.S. Army Europe&#39;s off-limits list. The owners of the club, however, said they weren&#39;t aware their business was blacklisted. (Raymond T. Conway / S&S)

KAISERSLAUTERN, Germany &#8212; More often than not, it&#8217;s easy for troops to comply with the U.S. Army Europe&#8217;s consolidated off-limits list &#8212; most of the blacklisted businesses in the Kaiserslautern/Ramstein complex of U.S. bases haven&#8217;t existed for years, even decades in some cases.

The latest USAREUR biannual list of off-limit businesses &#8212; dated July 23 &#8212; lists 24 entities ranging from bordellos and insurance agencies to contractors. A few are open and it&#8217;s clear why they&#8217;re on the list. The Bong Head Shop in Frankfurt, for example, sells drug paraphernalia. And three nightclubs on the list are still open.

Otherwise, not a single business on the list still is operating in the Ramstein/Kaiserslautern area, based on research conducted by Stars and Stripes.

The list is meant to keep soldiers and civilians out of bars with reputations for trouble such as fights, and away from businesses that sell contraband goods or that take advantage of Americans, according to USAREUR documents.

Moreover, the USAREUR list applies to all servicemembers and civilians in the U.S. European Command.

But just how useful the list is remains unclear.

USAREUR officials submitted documents explaining the mechanics of why and how companies and people are blacklisted. But after repeated requests, they failed to allow Stars and Stripes to interview anyone who could speak about the list or the closed businesses.

However, Millie Waters, spokeswoman for the Instillation Management Agency-Europe, said that based on Stars and Stripes&#8217; research, IMA-Europe &#8220;is looking into this matter and will update any of our documents or procedures as may be needed.&#8221;

USAFE and Kaiserslautern military community officials told Stars and Stripes that each Air Force installation has its own list of off-limits establishments, but those lists don&#8217;t necessarily circulate to Army personnel.

Moreover, a business may be on one list, but not the other. For example, the Paradox Club in Ramstein-Miesenbach has been removed from the Air Force list, but remains on the USAREUR list.

Though both lists contain closed businesses, the USAREUR list appears far more out of date. For example, Othmar Kukula is on the USAREUR list as doing business at 34 Kaiserstrasse in Kaiserslautern. In reality, a Pizza Hut restaurant, an Auto Connection &#8212; part of a chain of auto dealerships &#8212; and Theo&#8217;s Car + Muffler Service now are at that address.

None of the businesses have any connection to Kukula, said Theo Drimalas, owner of the muffler shop. Kukula owned the property, but sold it around 1982 to investors who developed the site for the auto dealership and restaurant, Drimalas said, a point confirmed by Auto Connection employees.

Asked if he&#8217;d done anything that might have led to his own business being blacklisted, the Greece native laughed and said, &#8220;Well, Americans have cheated me, but I&#8217;ve never cheated Americans.&#8221;

An Auto Connection salesman, who asked not to be identified by name, confirmed that Drimalas has had no problems since moving to the site earlier this year.

After a lengthy inspection of listed sites, Stars and Stripes was unable to locate more than a dozen blacklisted businesses:

The majority of businesses are located in or around the Ramstein/Kaiserslautern hub, but most are listed without addresses, and efforts to locate them through local business organizations were unsuccessful. A canvass of those listed by address showed only one &#8212; the Paradox Club in Ramstein &#8212; still open, at the listed address.

In Landstuhl, Cutler & Cutler, a blacklisted insurance business at Kaiserstrasse 38, closed &#8220;eight or nine years ago,&#8221; according to Monika Kessler, who owns the Kessler clothing store now at the address.

NAPA Parts, listed at Kindsbacher Strasse in Ramstein, is no longer in business, having closed five years ago, according to nearby business owners.

Hiltrud Greene is listed as a real estate agent and building contractor at Eichendorfstrasse 15/16 in Weilerbach, just north of Kaiserslautern. However, there is no such address, and residents on Eichendorfstrasse say they never heard of Greene.

Though the list appears to be out of date, the military still takes it seriously. Army officials in Europe post the list on bulletin boards all the way down to the company level.

&#8220;If there is any chance for us to change this, we would like to,&#8221; said Nadine Flyder, who was translating for other Natrix employees during a phone interview.

Despite being on the list, Natrix employees say there still is a large American crowd.

While the list is punishment of sorts for the businesses, cutting off American revenues, people who ignore the list and go to blacklisted establishments also can be punished, McKinney said.

Punishments for servicemembers patronizing the businesses could be anything from a letter of reprimand to Uniform Code of Military Justice action. Local garrison commanders also have several options for punishing civilian employees and family members, McKinney said.

Businesses alleged to have violated military standards don&#8217;t go on the off-limits list immediately; the process can take six months or more.

Every business has disputes with customers if they do any volume of business at all, said Drimalas.

So far, he&#8217;s had only one major dispute with an American, a complaint that was settled by a German civil judge, who ordered a compromise, Drimalas said.

The Army in Europe&#8217;s off-limits list forbids servicemembers, civilian employees and family members from all branches from patronizing listed businesses.

The process of putting an establishment or owner off-limits begins with complaints from a community member or an incident in which someone was injured.

The base support battalion&#8217;s Consumer Affairs office alerts the commander, and the commander assigns an investigating officer.

If the incident were a misunderstanding, the process ends there. But if the BSB commander believes there is substance to the allegations, he or she sends a letter to the company asking them to change their practices, said Lt. Col. Carol McKinney, chief law enforcement officer of the USAREUR Provost Marshall Office.

The company is given a chance to reply, and several letters may be exchanged between the commander and the business owner. If the problem isn&#8217;t resolved, a disciplinary control board &#8212; composed of members of the Judge Advocate General office, consumer affairs, military police, public affairs and others &#8212; convenes and determines whether the business should be placed off limits.

If approved, information is reviewed by the area support group commander and then again at the USAREUR Provost Marshall Office before the business or owner is added to the list.

An establishment can come off the list if it changes management or owners prove they have changed practices, McKinney said.

The following establishments or individuals have been placed off-limits to U.S. Forces personnel, according U.S. Army Europe officials. However, many of places listed are no longer in business or not at the addresses listed:

x-Establishment no longer in business or no longer at address listed.y-Appears on USAREUR off-limits list, but no on local Air Force list.