Some normalcy returns to bases, relief for Japanese rolls in 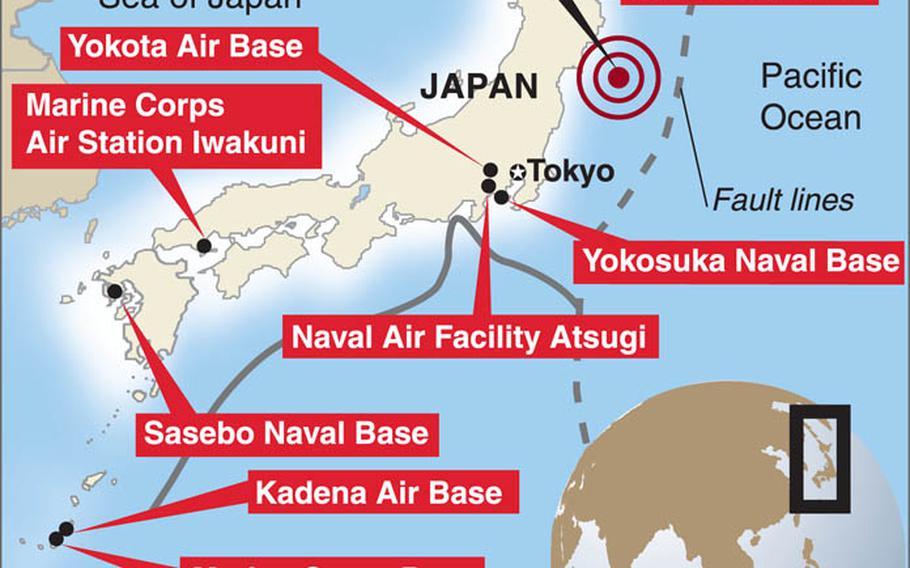 YOKOSUKA NAVAL BASE, Japan &mdash; Life started to return to normal Sunday for still-wary U.S. servicemembers and their families at most military bases throughout Japan, even as Japanese officials acknowledged Friday&rsquo;s disaster may be exponentially worse than initially feared.

Meanwhile, assorted U.S. military personnel and equipment started to arrive to assist the millions of people still reeling from the 9.0-magnitude earthquake and subsequent tsunamis, even as a new threat emerged. At least 12 people have tested positive for radiation exposure in the area surrounding two nuclear power plants, where one of the reactors was in danger of a partial meltdown and radiation leak.

Officials said more than 1,400 are dead and more than 700 are listed as missing. However, the police chief of Miyagi prefecture &mdash; one of the hardest hit areas of the country &mdash; has told disaster relief officials he expects the death toll in his prefecture alone to eventually top 10,000, a police spokesman told The Associated Press.

At Misawa Air Base, the closest U.S. military base to the devastation, lights began flickering to life Sunday night. The base lost power and heat in the wake of the earthquake; it was the hardest hit of U.S. installations in Japan.

Workers from Tohoku Power and the base were working to restore power but warned of intermittent outages even after the first power restorations, according to command statements. Japanese officials rescinded a boil-water order, meaning the water on base is now safe to drink.

Misawa schools will be closed Monday and Tuesday, according to Pacific schools spokesman Charles Hoff. All other base schools in mainland Japan and Okinawa plan on having normal school days, Hoff said. Any changes would be broadcast on AFN, he added.

Navy installations around Japan said that business would continue as usual Monday.

&ldquo;I expect it will be everyone at work and ... everything open as normal on our installations,&rdquo; said Cmdr. Ron Steiner, spokesman for Commander Naval Forces Japan.

Despite the progress, families living at the greater Tokyo area&rsquo;s military bases remain concerned about what lies ahead.

Among the thousands of family members living at military bases in the area was Erin Wieder, of Allentown, Pa.

&ldquo;I live on the eighth floor, and my children are scared to death to go back,&rdquo; Wieder said. &ldquo;We haven&rsquo;t been home since Friday afternoon.&rdquo;

Shannon Temple, of Oak Harbor, Wash., said she wanted to hear from command to find out how many more aftershocks to expect, and whether tsunamis were still a threat at the base, which lies on the Miura Peninsula coast.

Parents said they weren&rsquo;t convinced that they should send their children to school Monday, fearing for both aftershocks and any undiscovered structural damage to buildings.

&ldquo;Before I send my children to school, I need to know that it&rsquo;s safe,&rdquo; said Beth Ehring, of San Diego.

Residents at Yokosuka Naval Base and Yokota Air Base also found themselves parsing conflicting news reports about the extent of damage at the nuclear power plants in Fukushima prefecture, about 170 miles north of Tokyo.

&ldquo;Specifically, I&rsquo;m concerned about the plants,&rdquo; said Staff Sgt. Michael Peralta of the 374th Forward Support Squadron, who spent the day stocking up on emergency supplies and listening for news of any potential nuclear disaster.

For the time being, medical and base officials say residents should not fear any radiation poisoning. At Yokota Air Base, no increased levels of radiation were found following a test Sunday.

Ships at the scene

Navy crews flew several SH-60 helicopter missions Sunday to conduct surveys of a debris field at sea. Helicopters were also busy evacuating 600 people from the Takata city, officials said. In the coming days, the Reagan will help refuel helicopters from the Japan Self-Defense Force and assist the Japan coast guard, as well as fire, police and civilian authorities involved in rescue efforts.

Meanwhile, some 150 of America&rsquo;s premier search-and-rescue specialists arrived Sunday at Misawa Air Base en route to a coastal fishing village devastated by the earthquake.

The personnel are from two teams, one from California and the other from Virginia. Many of them took part in Haiti earthquake relief efforts, and a handful just returned a few days ago from New Zealand, where similar quake relief efforts had taken place.

They are the only American teams authorized to work through the Office of Foreign Disaster Assistance and US AID.

U.S. military efforts were not limited to the search-and-rescue.

Around 8 p.m. Sunday, a C-17 Globemaster III airlift plane took off from Yokota with 45 Edgren students, more than half who traveled from Misawa for sporting events last week and got caught in the quake.

&ldquo;We&rsquo;re trying to do what we can to help these folks,&rdquo; 374th Airlift Wing Command Chief Master Sgt. Ben Caro said. &ldquo;As a parent, you want your children to be close to you.&rdquo;

&ldquo;We&rsquo;re doing our best to get these kids reunited with their families,&rdquo; be it all at a time or piecemeal, whatever it takes to get them all home, DODDS Japan District Superintendent Clayton Fujie said.

But not everyone was excited about their return home.

&ldquo;I don&rsquo;t want to go yet,&rdquo; senior soccer player Kiyoshi Schaeler said. &ldquo;I think this is the safest place in Japan and I want to stay.&rdquo;