Some Marine posts have just the bare necessities 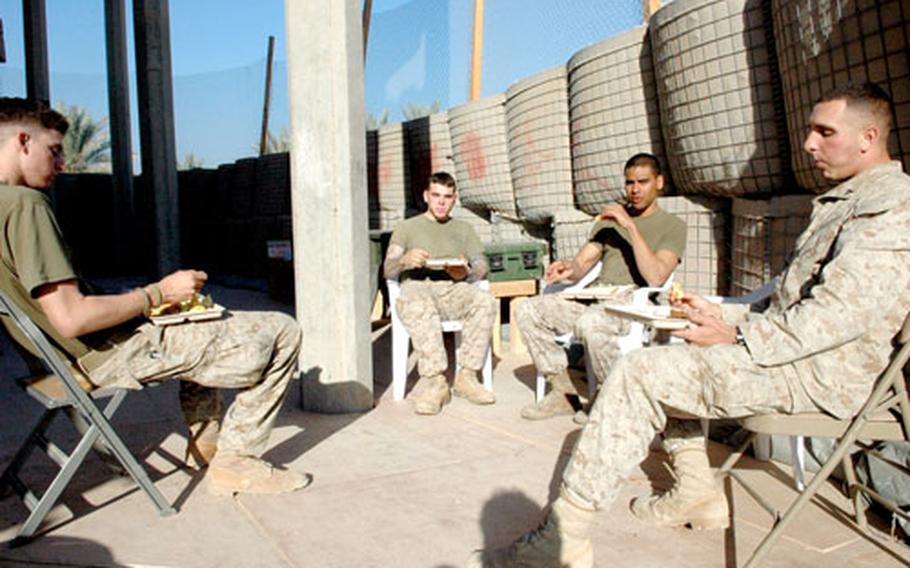 Although the relative luxuries of Camp Fallujah are just a few miles away, many Marines at smaller bases spend weeks &#8212; or even months &#8212; at a time without returning to dining hall food, hot showers, laundry services and Internet access.

The risk is roadside bombs, one that has dramatically altered these Marines&#8217; lives and the tactics they use in this persistently dangerous patch of Anbar province. Limiting nonessential vehicle travel has been a key element to this battalion&#8217;s strategy for staying safe.

&#8220;We have changed everything we do,&#8221; said Maj. Christopher Dixon, executive officer of the 2/2 Battalion, which is based at Camp Fallujah but has dispersed most of its Marines to small bases across the countryside north of the city.

Changes since Dixon&#8217;s battalion arrived in July include converting many vehicle patrols into foot patrols, which allow troops to detect roadside bombs more easily. They use helicopters for operations, if possible. And all logistics are consolidated into large and infrequent convoys, sent at strategic windows of time after checking the main routes for bombs.

That has helped drive down the number of roadside bomb attacks &#8212; from 41 in June and 40 in July to just 14 in October and eight in November, according to data provided by the battalion.

Some 15 Marines from the 2-2 Battalion have been killed since they arrived in July, most of them victims of roadside bomb attacks.

For the Marines posted at the small bases, day-to-day life has few amenities.

Lance Cpl. David Rogers from Rochester, N.Y., said he recently wore the same camouflage fatigues for about six weeks in a row without washing them.

Lance Cpl. Matt Boggs said he had not checked his e-mail in nearly two months.

Each Marine is permitted to use a satellite phone for one 10-minute phone call each week. Mail arrives about once a week at O-P Three, an Iraqi residence surrounded by sand-filled barriers and razor wire.

Many of the Marines are so tired of Meals, Ready to Eat that they now subsist on packaged tuna fish, ramen noodles, Spam and other prepackaged food sent in care packages from home.

Despite their relative isolation, many Marines maintain a steady supply of cigarettes and chewing tobacco and insist their assignment to these isolated posts is not entirely unpleasant.

&#8220;I enjoy being out here,&#8221; said Cpl. Austin Collom from Nashville, Tenn. He said he usually makes a night trip to Camp Fallujah once every two weeks, when he can eat at the chow hall around midnight before returning again before dawn.