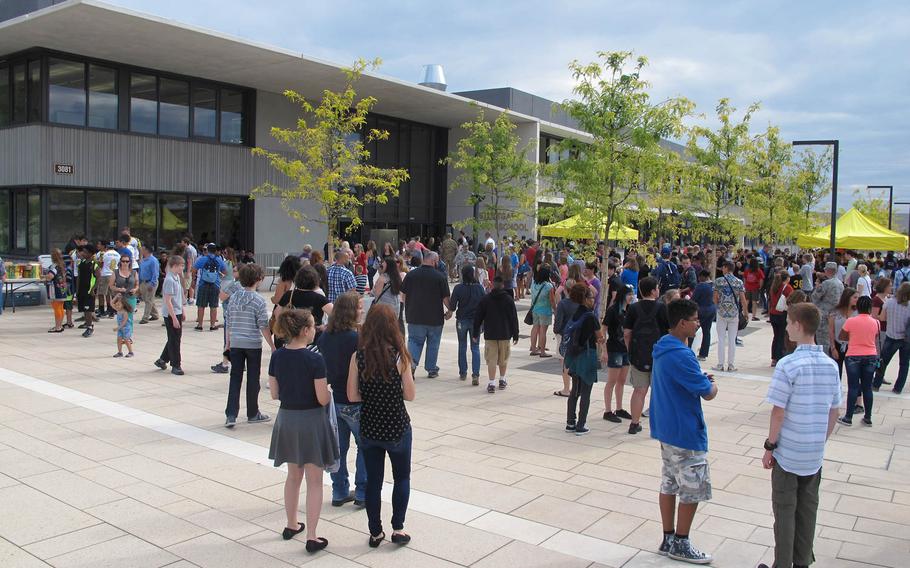 Department of Defense Education Activity-Europe policy on requirements for participating in commencement ceremonies is now being more broadly enforced in 2016. The result is that some home-schooled students who take classes at DODEA schools can't walk with other graduating seniors as they have in years past. ( John Vandiver/Stars and Stripes)

STUTTGART, Germany — The cap and gown has been ordered. Graduation pictures taken. And months earlier, family in the United States had booked flights with the expectation of watching Abigail Fay walk with her friends this week at Stuttgart High School’s commencement ceremony.

“Graduating was a big deal and still is. It is basically a right of passage for me,” said Fay, who attends classes at Stuttgart High School but will graduate with a home-school diploma because she was home-schooled for much of her academic career.

Now, it seems, Fay will watch from the sidelines when Department of Defense Education Activity-Europe students graduate. Less than a month before Wednesday’s ceremony at Stuttgart High, Fay learned from school officials that she and other students who attend military schools overseas — but plan to graduate with home-school degrees without a formal review of home-school transcripts — can’t participate in commencement.

For years, it has been common at some DODEA high schools for home-schooled students to walk with those enrolled full time. In the case of Fay, who attended Stuttgart High School as a senior, roughly half of her academic career was spent being home-schooled. Rather than a formal DODEA diploma, she will receive a home-school degree.

This year, however, DODEA has taken a closer look at how policies regarding commencement are enforced and determined that students such as Fay can’t participate. Rather than delay enforcement a year — allowing schools time to explain the policy and manage expectations — DODEA leaders say standards must be upheld effective immediately.

“It is regrettable there was an inconsistency in how that policy was applied,” said Will Griffin, a DODEA-Europe spokesman. “But we have a responsibility for being uniform in applying standards. Those standards have to be maintained. There won’t be change in policy.”

DODEA recently received a request for an exception to policy this year for a small number of home-schooled students to participate in various commencement exercises, but an internal review determined that such a request could not be granted “in the interest of maintaining fairness and consistency in the application of policy across our schools,” Griffin said.

Altogether, about eight students in Europe are known to be affected by an issue that has also emerged as a concern for some students in the Pacific, Griffin said. Home-schooled students, enrolled in one capacity or another in a DODEA school, represent about 1 percent of DODEA’s overall enrollment.

“This engagement runs across the spectrum, from using the school library to extracurricular activities to attending one or more classes,” Griffin said.

For such students, DODEA schools have offered separate home-school-focused ceremonies as an alternative to walking with the rest of the student body.

Fay says the gesture amounts to a broken promise and is at odds with what school officials had promised from the outset: that she could walk with her classmates.

For Fay, who plans to attend a six-month Bible school after graduation and later attend a German goldsmith school to pursue a career in jewelry making, mixing a public and home-school education better fit her goals than the more traditional route.

Now, to not walk during commencement, is a “disappointment,” she said.

“I’ve been excited about it the whole year,” said Fay, whose grandfather flew in from the U.S. to watch the ceremony. “If they had said this from the beginning of the year, we could have planned better or just accepted it.”