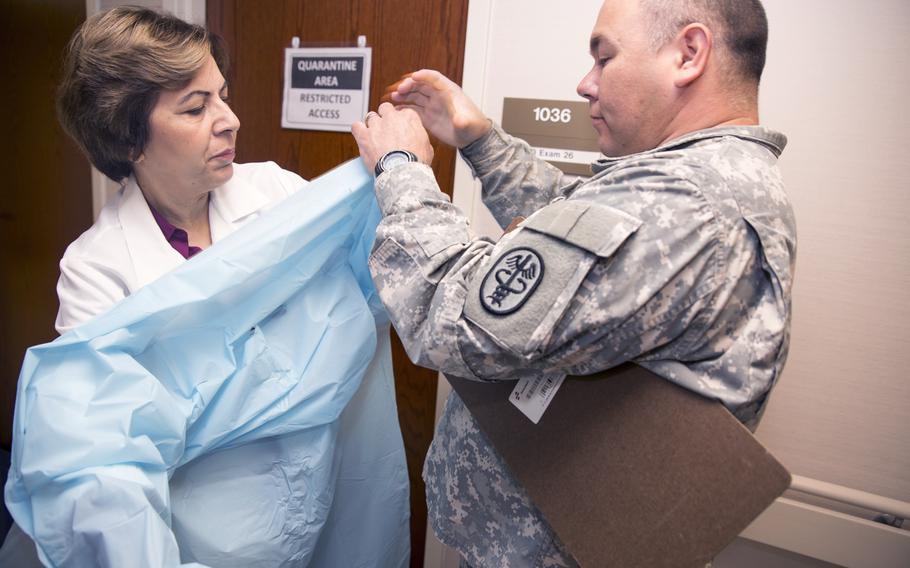 WASHINGTON — Troops who deploy to Africa to fight Ebola will likely return to their home bases before they undergo 21 days of quarantine, including those from a number of major installations in the United States.

And simply passing through the Ebola zone in West Africa, or making a quick flight in and out, isn’t enough to require quarantine.

Military planners are working out the details of the Ebola quarantine order Defense Secretary Chuck Hagel issued Wednesday, but some broad measures have already emerged from the Joint Chiefs of Staff, which must deliver an implementation plan within about two weeks.

“We’re developing that now, and some of it we already know,” Air Force Col. Edward W. Thomas Jr., spokesman for Chairman of the Joint Chiefs of Staff Gen. Martin Dempsey, said Thursday.

One returning group already has been placed in what the Pentagon calls “enhanced monitoring” at their home base.

Several dozen Army soldiers were ordered into quarantine Sunday in Vicenza, Italy, by Army Chief of Staff Gen. Ray Odierno. The troops, including U.S. Army Africa commander Maj. Gen. Darryl Williams, deployed from Vicenza in September to set up a headquarters in the Liberian capital, Monrovia, and begin construction of treatment units.

Up to 4,000 troops could eventually be sent to Africa, from installations including Fort Campbell, Ky.; Fort Hood, Texas; Fort Bliss, Texas; and Fort Carson, Colo.

The idea of setting up mass quarantine centers overseas could be politically problematic, with some officials in countries that host U.S. bases expressing reservations about hosting U.S. troops fresh from the Ebola zone.

Thomas confirmed that air crews and other transient personnel who go briefly to West Africa to support Operation United Assistance can avoid the quarantine requirement.

They will likely be subject to an earlier policy put in place Oct. 10 that allows transient personnel who remain at U.S.-controlled facilities and who come in contact only with people monitored daily for Ebola symptoms to monitor themselves for signs of the disease.

But Pentagon officials said a decision still needs to be made on whether DOD civilians working in the Ebola area need a quarantine. On Thursday, the American Federation of Government Employees criticized the lack of guidance for civilian employees.

“The two groups should be treated the same,” said J. David Cox Sr., the union’s national president. “If DOD considers service in Ebola-affected countries to pose such a high risk for members of the military that they are required to be monitored or quarantined for 21 days upon arrival in the U.S., then civilians with similar exposure should be guaranteed 21 days of administrative leave for either self-isolation and monitoring or quarantine, whichever medical authorities decide is appropriate.”