Some DODDS sports events in Italy postponed due to strike 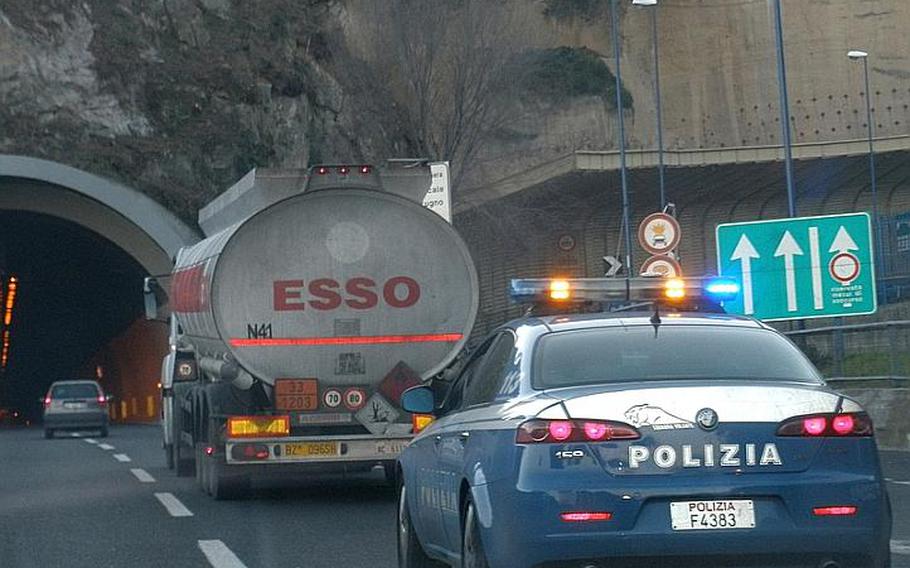 A fuel tanker gets a police escort Thursday afternoon on the bypass toll road (''tangenziale'') in Naples, Italy. Truckers called for a five-day nationwide strike on Monday to protest the government's austerity plans, causing some Department of Defense Dependents schools sporting events to be canceled or delayed. There were also reports that many gas stations were running dry. (Sandra Jontz/Stars and Stripes)

A fuel tanker gets a police escort Thursday afternoon on the bypass toll road (''tangenziale'') in Naples, Italy. Truckers called for a five-day nationwide strike on Monday to protest the government's austerity plans, causing some Department of Defense Dependents schools sporting events to be canceled or delayed. There were also reports that many gas stations were running dry. (Sandra Jontz/Stars and Stripes) 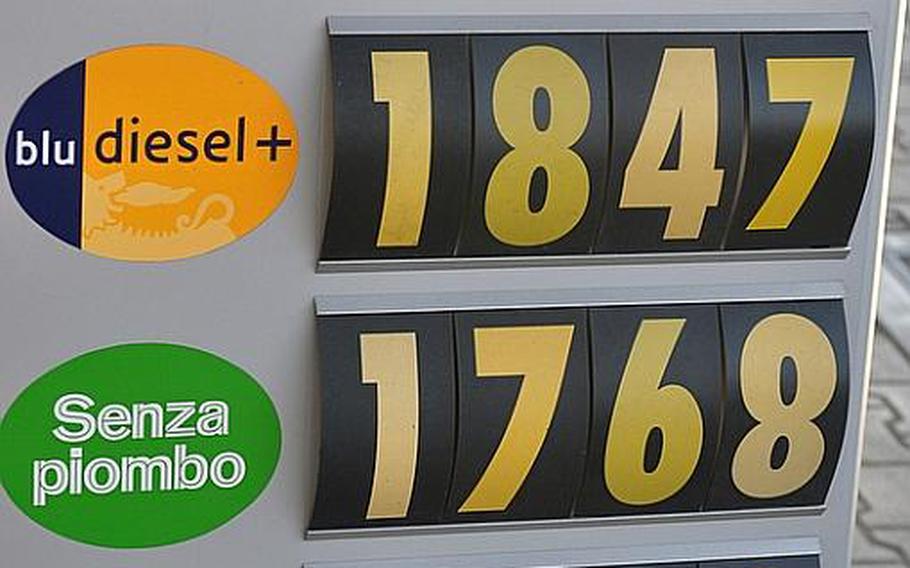 One reason truckers are striking in Italy is to protest the high cost of delivering goods. Gasoline isn't cheap in Italy, especially for those who don't have the benefit of NATO coupons that Americans in military communities use. A gallon of unleaded gasoline would cost about $9 without coupons. (Kent Harris/Stars and Stripes)

AVIANO AIR BASE, Italy &mdash; A nationwide truck strike that has resulted in highway closures and concerns of fuel shortages at gasoline stations also led DODDS-Europe to postpone some sports competitions scheduled in Italy over the weekend.

A wrestling meet Saturday at Aviano will continue without half its scheduled participants, she said. Vilseck, Germany; Naples; AOSR; and Sigonella are not sending wrestlers. However, Vicenza; Black Forest Academy in Kandern, Germany; and a small contingent from Rota, Spain, still planto attend. Vilseck will now wrestle at Heidelberg on Saturday.

Truckers began their strike Monday in protest over rising fuel prices and high road tolls. It is supposed to end Friday. Since American high school basketball matchups are Friday-Saturday affairs and some wrestling squads would be traveling on Fridays, the cancelations made sense, Seadore said.

&ldquo;Obviously, we do not want our kids to be in buses and stranded on the autostrada,&rdquo; she said.

Vilseck canceled after being told that the Brenner Pass, one of the main routes connecting Italy with Austria and its neighbors to the north, had been blockaded by the striking truckers, Seadore said.

The strike has also led some Americans based in Italy to take precautions. Aviano Air Base and other U.S. installations have tried to keep servicemembers updated on local conditions.

He said the strike &ldquo;hasn&rsquo;t impacted me yet, and I&rsquo;m hoping with this container it won&rsquo;t.&rdquo;

Annette Fornier, a public affairs officer for U.S. Army Garrison Vicenza, said there was &ldquo;no indication&rdquo; of gas shortages outside the base. But she said soldiers have been advised to keep their tanks at least half full.

Ajdezi Safet, who works at the Agip station where Daetwyler was filling up in Aviano, said his station should have gasoline through the weekend, but also recommended that drivers not let their tanks get close to empty.

A message posted on the NSA Naples Facebook page Thursday stated, in part: &ldquo;We are hearing plenty of reports that many gas stations have run out of unleaded fuel again.&rdquo;

A report filed by ANSA, the Italian news service, said the strike was continuing Thursday despite some concessions by Italy&rsquo;s government.